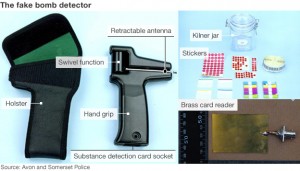 The BBC reports that James McCormick has been found guilty of selling fake bomb detectors to Iraq … yep, you read that correctly … FAKE. This complete shit (I cannot think of a better word) conned people into buying over 6,000 of these bomb detectors that detected nothing at all.

Haneen Alwan needed 59 operations after she was injured in a bomb blast in January 2009. She was two months pregnant at the time and lost her child.

“When people passed through checkpoints using these devices, they thought they would be safe, but they are useless. The man who sold them has no conscience. He is morally bankrupt. How could he sell them just for money and destroy other people’s lives?” she told a BBC Newsnight investigation into the case.

A senior Iraqi official told the BBC that the useless devices had created a false sense of security – and that no punishment would make up for the blood that had been shed as a result.

This all came to light two years ago when well-known skeptic Bruce Hood assisted a BBC Newsnight team to investigate all this. At that time Bruce blogged this …

The first time I heard about the ADE651 was when someone twittered a link to a New York Time piece about a bomb detector that appeared to be nothing more than a dowsing rod. Two journalists had gone over to Iraq to investigate a story about a British company that had been selling a device to the security forces to screen for bombs and weapons for between £16,000 -£30,000 apiece. According to the product information, the ADE651 could detect concealed explosives, narcotics, weapons, human bodies, illegal ivory and even truffles whether they were underground, underwater and even at a distance of 3 miles from a plane. The key to the system was “programmed substance detection cards” which each carried the “frequency” of the substance they’re supposed to detect. This was achieved by a technology based on “nuclear quadruple resonance.”

Clearly this was pseudo-scientific babble. To my eyes, the ADE651 was a sophisticated looking dowsing rod, and yet the company ATSC Ltd that made them had already sold £50million worth of these devices to the Iraqis and had just secured another major contract.

When I looked into the story more, I discovered that a number of parties including the James Randi Educational Foundation had already investigated the claims of ATSC about their device and dismissed it as a scam. Randi even extended his famous $1million test for a device that defies scientific explanation. There was also a possé of bloggers most notably Techowiz, Dubious Dick of theUK Skeptic’s Forum and Bad Astronomer on the case.

Well, today’s news is almost the final act in this entire sorry sage of wanton deceit and outright fraud, all dressed up as pseudo-scientific bullshit. It was utterly tragic because it cost lives …

“We have heard evidence from many, many experts, scientists, leaders in their field, who have said this was a fraud. A sham.

“That device has been used and is still being used on checkpoints. People using that device believe it works. It does not.”

Having now been found guilty, the next step will be his sentencing on 2nd May. I personally hope that after they have locked him up, they throw away the key.