Its finally available, Tim Minchin’s nine-minute beat poem has been released as an animated movie.

If you have not come across anything by Tim before, but you are a skeptic, then you really should check this out. Tim is an Australian comedian, actor, and musician, but is best known for his musical comedy, which has featured in three CDs, three DVDs and a number of live comedy shows which he has performed internationally. He has also appeared on television in Australia, Britain and the United States. But far more importantly, he comes along to TAM London each year to hang out with all the other skeptics.

And if curious to find out a bit more about Tim and what his music is like, well here he is on the topic of the “Good” book … 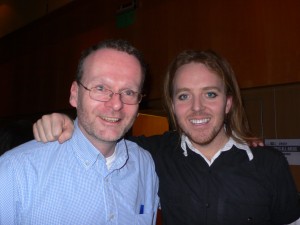 Finally, to stroke my ego, here is a picture of both myself and Tim (yes indeed twins, it truly is hard to tell us apart).