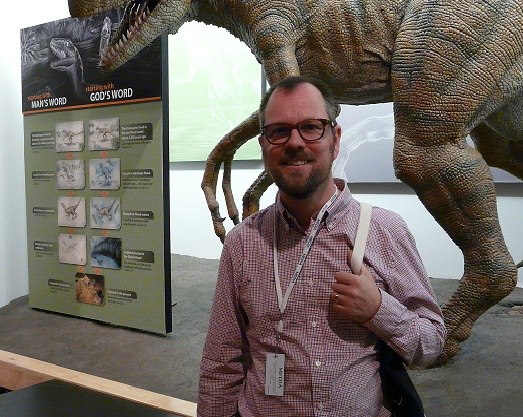 Yep, I’m in Ireland this week, in fact I landed today … (thud) … and so tonight the Dublin “Skeptics in the Pub” had the fabulous Neil Denny (pictured), giving a talk all about his Little Atoms Road Trip last year.

OK, lets start with the basics, Skeptics in the Pub is a concept where skeptics hang out together in a … (Oh you can guess, right?), and often have an event where an invited speaker comes along to give a science based talk. It is a fast growing movement and most cities in the UK and US now have such groups, there is probably one near you; google them and go hang out … it will be a blast.

So the speaker tonight, Neil Denny, is the producer and presenter of the Little Atoms Radio Show and podcast, and was also the recipient of a Travelling Fellowship from the Winston Churchill Memorial Trust. In May 2012 Neil embarked upon a month long, 6614 mile road trip across America, with the aim of producing a series of podcasts which presented a wide-ranging overview of science and skepticism from an American perspective.

It starts with this article he wrote for the Guardian.

He recorded interviews at some major sites of scientific interest, including NASA’s Jet Propulsion Laboratory, The Los Alamos National Laboratory, and The American Museum of Natural History. He also spent a less scientific day visiting Kentucky’s Creation Museum.Yes, OK, generally the folks he interviews are pure science guys, but this was too good an opportunity to pass up, so he has an interview with one kook as well.

What drove Neil, a non-scientist, to do this? He started out many years ago reading, “The Demon-haunted world” by carl Sagan, it inspired him so much that it set his life rolling in a new direction.

At the start of the talk I was a tad worried, I had brought five other with me and at first we were half the audience, but Neil soon warmed up and as he proceeded, folks tricked in. I knew I was in good company when I spotted Michael Nugent. (I had a brief but very nice chat with him afterwards). Alas, I wished I could have hung out a bit longer, but had to go … ah but their next talk will be Wednesday, so we will be back.

Neil took us through the various interviews he did during the trip, but perhaps the most outstanding was the one he did with Ann Druyan, the widow of Carl Segan. Just a couple of days after they had decided to spend the rest of their lives together, she was wired up to an ECG and her brain was measured, and that measurement became part of the Voyager Golden Record. In the Epilogue of the book Billions and Billions, she describes the experience:

Earlier I had asked Carl if those putative extraterrestrials of a billion years from now could conceivably interpret the brain waves of a meditator. Who knows? A billion years is a long, long time, was his reply. On the chance that it might be possible why don’t we give it a try? Two days after our life-changing phone call, I entered a laboratory at Bellevue Hospital in New York City and was hooked up to a computer that turned all the data from my brain and heart into sound. I had a one-hour mental itinerary of the information I wished to convey. I began by thinking about the history of Earth and the life it sustains. To the best of my abilities I tried to think something of the history of ideas and human social organization. I thought about the predicament that our civilization finds itself in and about the violence and poverty that make this planet a hell for so many of its inhabitants. Toward the end I permitted myself a personal statement of what it was like to fall in love.

This is quite mind blowing, the recording of her brain-waves … a young woman in love with Carl Sagan  … will potentially outlast all of us and even planet earth, as voyager slowly wanders the Cosmos for billions of years.

You can find Niel’s interview with Ann Druyan here … it was first broadcast on 1st March this year. Pause and go listen to it, you will not be disappointed.

The podcasts from Neil’s trip can be found at the following website: http://feeds.feedburner.com/littleatomsroadtrip.