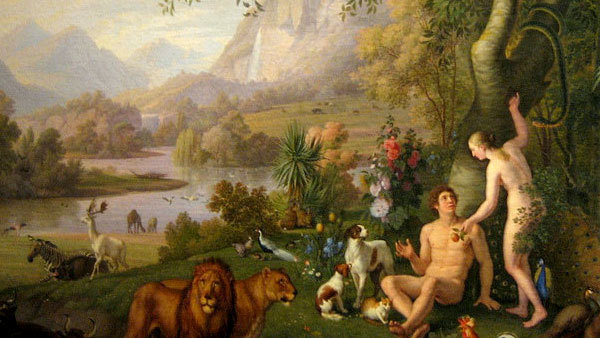 A common foundational idea of religious belief is the classic sales pitch – “here is a hideous problem within human nature, but I have a product that will fix it for you”, but if the problem itself is fictitious, then the proposed “solution” is attempting to fix a problem you do not have.

It really is often like this, and so I’ll illustrate that with a non-religious example. I recall a chap once coming around to my house to sell me a product you spray on the outside of your external walls to preserve them, and being a tad board at the time, I let him in to see what his sales pitch would be like. At one point he had me outside and was showing me a few tiny cracks and explained that his product filled those and thus helped to preserve it all. Hey, I said I was simply curious, not stupid, so I politely declined his special one-time-only 50% reduced and yet very expensive offer and sent him on his way, because this was essentially a scam.

Religions have been in this game far longer, and so they are quite good at it, I need not explain for I guess we are all familiar with the “You are all wicked and evil, but if you would only let God in, then … ” patter. It should also of course be no surprise to realise that the beliefs with the largest number of followers are also the best at tapping into the human emotions of guilt and fear to both ensnare and retain.

I’ll stick to looking at the first today and then move on to examine the second in another posting tomorrow.

The Better Angels of Our Nature

Back in 2011, the rather famous professor of psychology at Harvard, Steven Pinker, published the results of his long study of trends for every form of violence within a book entitled “The Better Angels of Our Nature”.

If curious, you can find the book on Amazon along with all the reviews …

(Side note: No, I’m not getting a cut for plugging the book, it is simply a good book).

Bet hey, why should I make the argument second hand when the author himself does that in his 2007 TED talk, and yes, the data was already in place at that time, the book is simply further confirmation that the trends he illustrated held true in 2011.

Steven Pinker has an article in the UKs Guardian last Friday in which he updates us on the trends and writes ….

In the early 21st century did a bunch of undulating curves fortuitously scrape bottom? Or, as I argued, was something systematic going on?

To any headline-clicker, the answer is obvious. The year 2015 began with the Charlie Hebdo massacre and proceeded to a failed ceasefire in Ukraine, atrocities by Islamic State, and a human catastrophe in Syria that has spilled over Europe’s borders.

But headlines are a poor guide to history.

He the precedes to go through the latest update of his statistics, and concludes …

Though I’m relieved that making myself a hostage to fortune eight years ago has not turned out badly, (at least so far), needless to say my greater relief is for the state of humanity. Despite the headlines, and with circumscribed exceptions, the world has continued its retreat from violence. We need invoke no mysterious arc of justice or end of history to explain it. As modernity widens our circle of cooperation, we come to recognise the futility of violence and apply our collective ingenuity to reducing it. Though a few narcissistic despots and atavistic zealots stand athwart this current, history does not appear to be on their side.

Steven Pinker’s graphs can be seen in full here

The belief that we are doomed and trapped within a never ending cycle of violence due to our nature is indeed demonstrated to be a myth, the world today is a far better place, not because of religious belief, but rather because of our ability to rise above ancient fears and myths, and to put such toys from our childhood down and move on.

We are not the way we are because a talking snake tricked a common ancestor into eating some fruit, nor are we destined to remain ensnared within a cycle of ceaseless violence, but instead are slowly learning to rise above all that. Attributes such as empathy and compassion manifest because we have better communication and so collectively we find a better way towards a degree of equality and tolerance that had never been imagined by our ancestors.

Today as never before the world is a better place than it has even been, and yet this is not the end game, because each and every day so far the trends continue, and so tomorrow will potentially be an even better day.

1 thought on “Is sin real – Are we really just a few heartbeats away from depravity and wickedness?”