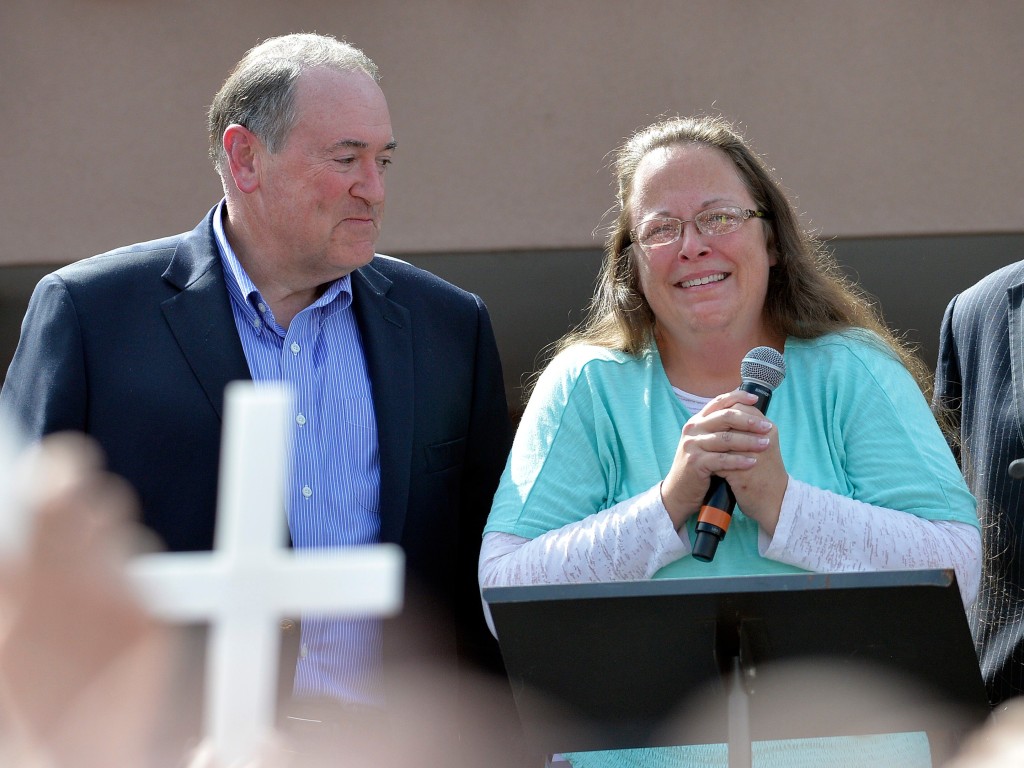 It’s Kim Davis of course, and so the weird logic that Former Arkansas Gov. Mike Huckabee is attempting to deploy is that there is a law that we would all agree is morally bad and so we simply all opt to ignore it. In trying to do this, he basically gets it very wrong, and so it runs something like this …

Mike Huckabee said Wednesday that the 1857 US Supreme Court decision Dred Scott v. Sandford, which ruled that people “of the African race” are not US citizens, is still “the law of the land.”

That is of course bullshit, and the article goes on to correctly point this out …

The ruling, widely considered the worst in American history, was overruled in 1868 by the 14th Amendment.

OK, so let’s assume for a moment that he did not make a complete hash of his argument, then essentially what he was trying to say is this …

“It goes back to what Jefferson said, which is that if a decision is rendered that is not borne out by the will of the people, either by the elected representatives and going through the process,” Huckabee said. “If you just say it’s the law of the land because the court decided it, then Jefferson said, ‘you now have surrendered to judicial tyranny.'”

Huckabee has repeatedly referred to the Supreme Court justices who ruled in favor of gay marriage as “five unelected lawyers,” and said Thursday that by acting without a congressional mandate the decision was akin to Dred Scott.

… er, no that is not how it works and nor is it what is going on here.

Point 1 – The Supreme court is not “judicial tyranny”

It was established rather a long time ago that the Supreme Court is indeed the final authority to judge whether the legislative or executive branches are acting within the powers granted to them in the Constitution. (if curious, jump here to a few summary details on that where you can find out about a ruling in 1803 that settled all this).

Dred Scott was an obnoxious backwards step that was being deployed by bigots to enforce a specific racist agenda, and in so many ways it reminds me of folks such as Mike Huckabee himself.

Point 2 – The will of the people

What is clear is that the desire for equality and support for same-sex marriage is not a minority view, it is a majority view, he is the bigoted minority that stands on the wrong side of the moral line …

Public opinion in the United States shows majority support for the legal recognition of same-sex marriage. This support has remained above 50% consistently in opinion polls since 2010

Religious Freedom is not a license to impose weird beliefs

You will of course always find people who promote weird beliefs and advocate the deployment of policies that attempt to impose such weird beliefs upon the majority. We are all individuals, and so if indeed somebody demands the right to be a homophobic bigot for religious reasons, then they do have the right to do that. Legally this is wholly appropriate, the Religious Freedom Restoration Act (RFRA) grants Kim Davis the right to simply step aside and permit a colleague to issue the license, and if she objects to her name being on it, then a state court directive to replace her name on the license is also permitted by RFRA. If she asked for it she would get it, but alas no, instead she has decided to cross the line and instead impose her specific beliefs upon everybody, so when it comes to a dictatorship Mike, you need look no further than Kim Davis.

What also makes Mike Huckabee’s views newsworthy is that he is not simply a nobody, he is a candidate for U.S. president in the 2016 election next year. This is no pipe-dream, he is in with a credible shot at it, especially when you consider that he won the popular vote in a number of states in 2008 and came in second behind McCain.

The idea that he could one day move into the Whitehouse is indeed a truly a terrifying thought.