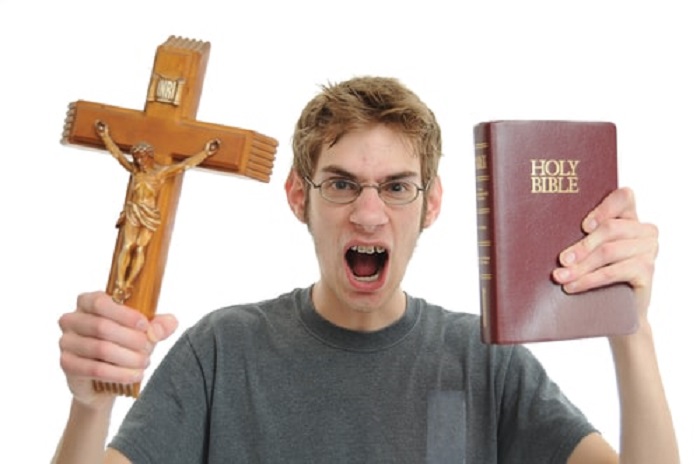 So the news is that Voice for Justice UK, a religious group, has presented a 12,000 signature petition to the BBC demanding that the BBC should not take up proposals to reduce Christian programs and that they should also fire their current Head of Religion and Ethics, Aaqil Amhed, simply because he is not Christian.

“The UK is actually a Christian country, it’s established as such by statue, all our laws, our traditions, our culture is founded on Christian values, so it would seem entirely right that Christianity be given priority air time.

“It is right that Christanity be respected for what it is, our values be respected, that it be presented fairly, and that in the programming schedules the status of Christanity as the established religion of this country should be recognised.”

“Even when it comes to general programming, Christians are being misrepresented or treated unfairly, they’re either portrayed as barmy, or they’re very much portrayed as endosring modern, secular views.”

Voice for Justice UK also told Premier it thinks there is an “unacceptable bias in favour of Islam and against Christianity” when it comes to BBC religious programming.

Revd Lynda Rose added: “It’s scandalous that someone displaying such clear pro-Islamic bias and contempt for Christianity should be the BBC’s Head of Religion and Ethics.

“We may be a multicultural society, but the UK is still officially a Christian country, and Christianity should be given proper coverage and treated with respect.

There are a few points to address here

Point 1 – The majority in the UK are not Christian, and are in fact not-religious at all. Even many of those that are Christian, do not identify that cultural heritage as a core part of their lives.

Point 2 – The UK is not a Christian nation. England, one part of the UK, has the Church of England as an established Church. Scotland, another part, has a national, but independent church. Both Wales and Northern Ireland have neither and are in essence secular.

Point 3 – Our social and legal values are not aligned with the values being promoted by this group. On their website they take a very clear stance against abortion and also against gay rights, and thus against the current social stance for equality and basic human rights.

Do they have any evidence that Aaqil Amhed has been unfair and not impartial in his job?

Nope, none at all, they have nothing of any substance to back that character slur up. As for whom the BBC appoints, it is quite frankly none of their business, and so the attempt to disparage one specific individual on the sole basis that he does not believe what they believe is in effect a loud siren announcing “Here be xenophobic intolerant nuts”.

The entire reason for this petition was to demand that the BBC should not reduce Christian Programs (Songs of Praise … yawn), but when asked about this, it turns out that these folks have not done their homework at all, because as the BBC explained in their response …

“We are actually intending to do more programming around Christianity and more on other faiths as well, so there is absolutely no question of an ‘either or’ on our output.

BBC Head of Religion and Ethics, Aaqil Ahmed is not biased against Christianity programming, nor does he show any pro-islamic bias and any suggestions that he does are ludicrous and unfounded.”

I note that one point these folks make is that … “Christians are being misrepresented or treated unfairly, they’re either portrayed as barmy”

Ding ding ding … hello, this is reality calling, this is exactly what you just did. You misrepresented what was actually going on, you treated a BBC employee unfairly by publicly disparaging him on the basis of no evidence at all, and generally behaved in a totally barmy manner.

If you really really don’t like be labelled “barmy”, then a good place to start is to stop playing that role.