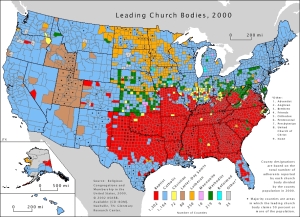 Valerie Tarico, a psychologist and writer in Seattle, has a great article over on AlterNet that is well worth a read on all this …

Ever since Freud first started publishing his theories, psychologists have had a fascination with what he called “defense mechanisms“:

So is this simply an odd correlation, or is there really a causal relationship here? Well, there are other observations that verify all this, for example …

Strip club owners claim they make three times as much during Republican conventions as Democratic conventions or even the Superbowl. MacInnis and Hodson quote exotic dancer Layla Love who in 2001 said, “Since the RNC has started, I have actually started to do 15 to 17 hour shifts, every day, until the convention is over. So, for basically seven days straight, I will be in the club, every day, day shift and night shift.”

Religion will often advocate for the suppression human sexuality, and when the idea of doing so is fully embraced, it will then turn to ravage and torment the believers, and so it will in effect burst out again, often in secret.

My real beef with these folks is the complete and utter shameless hypocrisy at play here – it turns out that those who want their teens to just say “no”, apparently can’t do so themselves.

American men, women, and yes, children need honest conversation about the world we actually live in, not some pretense or fantasy about how we think the world should work. We need policies that are grounded in evidence and that recognize the awkward, complicated and sometimes embarrassing reality of what it means to be human. And that includes the fact that most of us really, really like sex.