In a global ranking of 65 countries, the UK came six places from last, with 30% of the population calling themselves religious.

While 53% of people said they were not religious, only 13% said they were a convinced atheist and the remainder did not know how to define themselves.

This was followed by Japan, where just 13% of people were religious, Sweden with 19%, Czech Republic with 23%, and the Netherlands and Hong Kong with 26%.

OK, so where the heck is this poll?

The news is all over the media in many places, but nobody links to anything, so where is the actual poll?

Well, it turns out that this all comes from the Win/Gallup end of year poll and what has happened here is that they have been dribbling out the results.

Q9. Irrespective of whether you attend a place of worship or not, would you say you are? 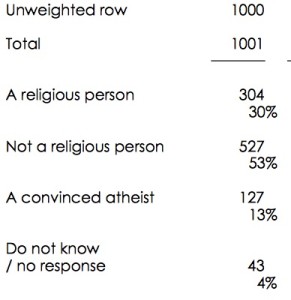 So the basis for all this news is that of the 1000 people they polled, only 304 stated they were religious.

Leaping to this being a solid conclusion for the entire UK is a tad risky on the basis of such a low number of people being polled, and like all such polls, I’d recommend treating it with a large chunk of salt … especially when it tells you what you want to hear, or would like to hear.

Exactly how did they select these 1,000, and in what way did they determine that they are an appropriately representative sample of the entire nation within each and every country? (They discuss that here)

Consider this, they polled roughly 1,000 in every nation …(+/- several hundred)

… seriously!! … one individual answering in China is a meaningful sample for 1.39 million humans?

OK, so you can see the problem here, not just because from country to country, the numbers of humans is vastly different, and also perhaps because of how they polled varied from nation to nation, but also because (I would argue) the data sample is just too small (except perhaps for Iceland where 1800 represented just 321,857).

Oh and one other observation, the data for Q9 appears to be missing for some nations such as Iraq and Saudi Arabia, but then that is perhaps understandable. In nations such as Saudi Arabia answering Q9 incorrectly can potentially lead to your head being chopped off, and that might indeed skew the data a bit (and I’m not exaggerating about that, the penalty for Apostasy in Saudi Arabia and several other nations is death), so if you lived in Saudi Arabia and a random stranger phones you up, claims to be from a polling company, and asks up if you are religious, how would you answer?

So what did they claim to find? 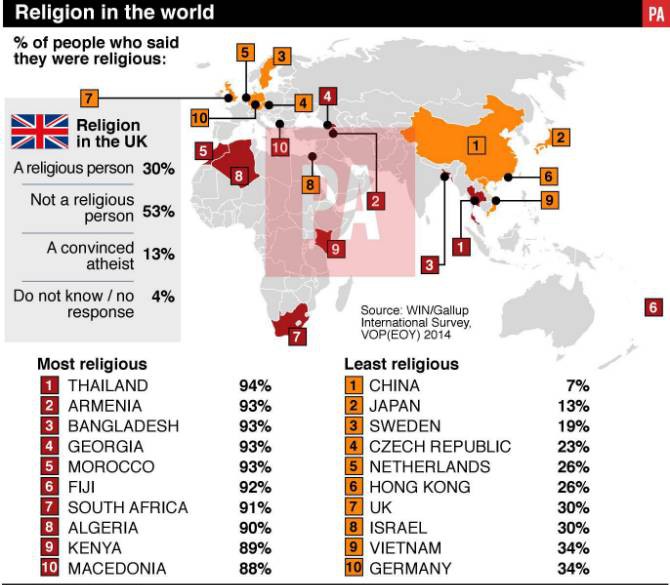 I guess at best you can think of this as a finger in the air to see which way the wind is blowing, and not more more than that