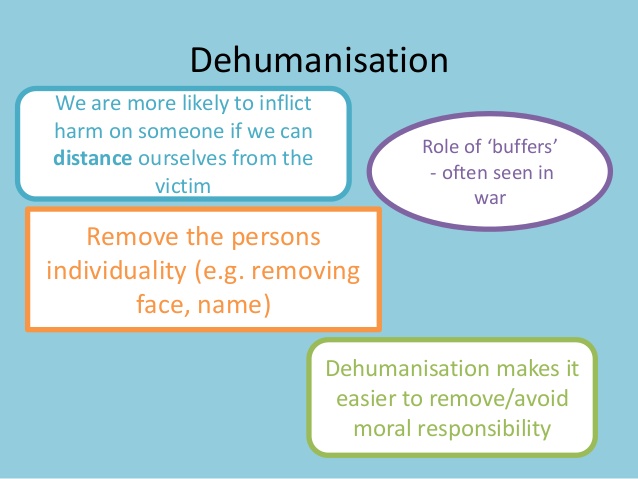 The UK’s Independent has a great interview with David Eagleman, and that opening remark of mine just might be your cue for the “Who?” comment. OK, fair enough, so first a quick intro. He is a neuroscientist and writer at Baylor College of Medicine.

Now on to the Interview in the Independent. I’m going to pluck one specific bit out of that and then mull over it a bit, and I should add that I would recommend reading the rest of the Interview, and that in itself might motivate you to check out some of his other writings. So the specific snippet I have for you is this …

We need to understand what happens in the brain to make us dehumanise people At this moment, with terrorist attacks and the refugee crisis, we hear people being referred to as “cockroaches”. History shows that all it takes is hearing that message a few times to start feeling, “Yeah, they don’t really count, they’re not like me.” It’s vital to counter this, and that pivots on understanding that there are these [empathy] networks in the brain that get dialled down by propaganda. If we can come to understand these patterns of dehumanisation, we’ll be more immune to them.

Inside is a safe warm place and outside lurk human monsters. I’ve been there and was once quite religious, and from that I well recall the various strands of thinking that would prevail. There might indeed be an official policy of “hate the sin and love the sinner”, but in reality you would end up truly believing that you held the truth, and that everybody else who did not was incomplete and lost. Take this mode of thinking to its natural conclusion and you soon find that you do start to dehumanise “them”.

Perhaps the most famous example of this is illustrated by the Catholic Bishop Cormac Murphy-O’Connor explaining in 2009 that a lack of faith is “the greatest of evils.” and that atheists are “not fully human”.

Turn this coin over and take a glance at the view from those outside of those within, and you sometimes discover more of the same. Sometimes those who are religious are labelled “stupid” or “idiots” by some of the non-religious, and so in effect we dehumanise by relegating “them” into a category that makes them not only unlike us but beneath us, and that all very much starts to potentially eat away at our empathy. To then start a conversation from this position is a path that will lead to a truly unproductive conversation.

Religious belief is not an intellectual endeavour, but is instead an emotional one, and generally has its roots within the cultural context that we anchor ourselves within. That can often be a micro-culture and need not be the prevailing one within the society we live in. For example, as a teen I had a religious conversion, and looking back it strikes me that if it had been Zeus or Thor instead of Jesus, and the precise details of the information that was being embraced as “truth” was distinctly different than the social norms, then it would in all probability have not made much difference to that conversion experience, because it was very much being driven by a transition from being isolated and alone into a group that welcomed and accepted you as belonging. It other words it ensnared successfully because it met an emotional need and not because it was true.

Those that get caught up by extreme ideologies, are making a transition that is very similar to the generic religious conversion experience. Often it is asserted that it has nothing to do with religion and is instead driven by other factors, but the two key aspects, – the embrace of extreme ideas as truth, and the dehumanisation of everybody outside – is essentially the same psychological mechanism in play, and it is often, but not always, a religious ideology that is in play.

Once again it is a similar pattern.

I once spent a year in Belfast in Northern Ireland working on a contract, and was there to observe the joys of the marching season. This consisted of the Orange Order setting off the exercise their “right to march”, and made sure that the route would involve walking through a Catholic area as a means of asserting their supposed superiority and to offend them. Sure enough, as they proceeded through the catholic area, all the locals would come out at the appointed hour and be ready to be offended.

Very much in vogue was a mode of thinking on both sides that dehumanised “them”, and remember that this is not due to anything that any of these people have themselves done, but is instead their inheritance from people who died centuries ago.

As a side note, one lesson I learned is that the polarisation of society along such political-religious lines is not necessarily pervasive throughout any society even after centuries of conflict. The office I worked within was basically a neutral zone and nobody knew which side anybody might potentially belong to. People acted decently towards each other and strove to preserve this neutrality. The net effect from this was a rather odd absence of any and all discussion about any sport. The reason is that the moment anybody identified support for a specific team, or even a specific sport, is the moment they would effectively label themselves, and so I was impressed to note that the general social protocol was that you did not mention sport and thus preserved the neutrality – it worked really well, not because it had to, nor because it was mandated, but rather because that is how everybody wanted it to be.

We can and do as a species often rise above what is expected.

Recognition of what is going on is a good first step

As individuals it can be so tempting to label “them” as idiots / crazy / lunatics / complete shits / immoral / wicked, etc … but when we do so we potentially are cranking down our empathy and that then makes it easier to hate these anonymous and semi-anonymous members of a group. In the end they are really not very different than anybody else, and have similar hopes and dreams.

We are bound to each other by our common humanity, and there truly is no “them and us”, it is just “us”.