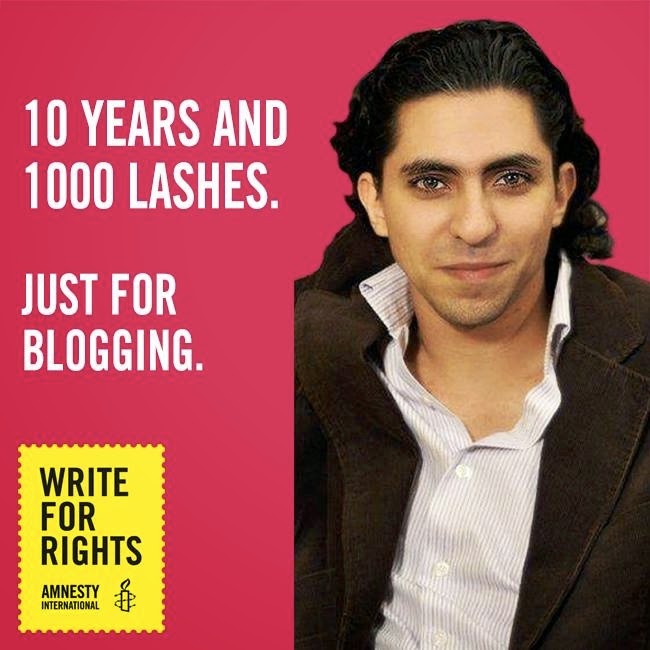 Ensaf Haidar, the wife of the unjustly imprisoned Raif Badawi, has issued a statement in which she reports that his flogging is set to resume …

I was informed by an informed source, that the Saudi authorities have given the green light to the resumption of Raif Badawi’s flogging. The informed source also said that the flogging will resume soon but will be administered inside the prison.

It is worth mentioning that the same source had warned me of Raif’s pending flogging at the beginning of January 2015 and his warning was confirmed, as Raif was flogged on 9th January.

While i do not understand this decision especially as Raif’s case is still being reviewed by the supreme court according to a senior source in the Saudi Ministry of Justice and according to the statement of UK Foreign Office minister, Tobias Ellwood, who told the House of Commons in July that my husband’s case was still being examined by Saudi judges.

I call on his Majesty King Salman to gracefully end my husband’s ordeal and to pardon him. I also appeal to his Majesty to allow him to be deported to Canada to be reunited with his family and children, who have been deprived of their father for more than four years.

I take this opportunity to remind Mr. Justin Trudeau, the new Canadian Prime Minister, of his promise to support Raif badawi and ensure his release. I plead with him to give Raif a White Passport to enable him to be reunited with his family in Canada.

Why would they do this?

Let us not forget that his “crime” was to simply write a blog that criticised the Saudi religious police, and for this he was sentenced to 1000 lashes and ten years in prison. Since then there has been a considerable degree of public outrage all around the world directed at Saudi Arabia, and so there have been no floggings since last January, but clearly something has changed.

I speculate that the Saudis may in fact be attempting to send a political message. There has been an increasing tide of criticism that has been quite rightly directed against them, and so this just might be happening as a way to tell the world that they will stand firm and not waver from their fanatical beliefs.

The ambassador reminds his readers that Saudi Arabian intelligence has helped protect British citizens by foiling terrorist plots being constructed by al-Qaeda. This is certainly true, but it is an empty equation. It is declaration by one’s neighbor that, since they helped you clean up the neighborhood, you should—no, must—you must ignore the cage in the backyard in which he keeps his wife and children. No, we must not. We do not. We can not.

If you have not already done so, please sign the Amnesty International Petition

You can find the link to it here.

What else can you do?

Amnesty has a list of suggestions that they posted last January …

Saudi Arabia is very sensitive about its public image and international standing. If we target officials publicly, they could be forced to respond and publicly shamed into stopping the flogging. Here are a few Twitter accounts to try:

2. Get your government to pressure Saudi Arabia

Search online for the phone or fax details of the Saudi Arabia embassy in your country, and call them up to demand that Raif is not flogged again and that they release him immediately. We know this can be a particularly effective (and annoying) form of campaigning. You could also Tweet them, though the only Saudi Arabian embassies known to have Twitter accounts are the USA @SaudiEmbassyUSA and UK @SaudiEmbassyUK.

If you’re not on Twitter, you can find the contact details of the Saudi Arabia embassy in your country here.

4. Demonstrate outside the Saudi Arabian embassy

Across the globe, campaigners have started to organize protests outside Saudi Arabia embassies. Contact your local Amnesty International office to see if something is already planned, or get some friends together to organize your own demonstration.

Please send your messages of solidarity to Raif’s family, so they know we are standing with them and pressing Saudi Arabia to release him. Tweet to @raif_badawi (Raif’s official Twitter account) and @miss9afi (Raif’s wife, Ensaf Haidar, who lives in Canada with their three children).

Ensaf has told us she fears her husband may not be able to physically withstand a second round of lashes. “Raif told me he is in a lot of pain after his flogging, his health is poor,” she said.

“I told our children about the news last week so that they would not find out about it from friends at school. It is a huge shock for them. International pressure is crucial, I believe if we keep up the support it will eventually pay off. We must keep on fighting.”

I will however add one additional plea – if you do tweet, mail or email the Saudi authorities to protest, please do not be abusive or rude, that really will not help.