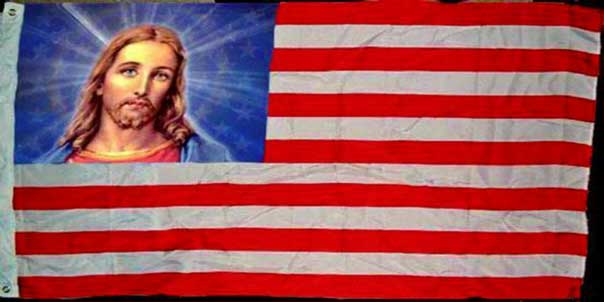 Having read about a poll of Republicans that reveals that 57% of them would very much like to dismantle the Constitution and instead establish a Christian theoracry, I’m perhaps in one sense not surprised because I was aware that some do indeed embrace that view. However, I do wonder about the number being as high as 57%.

OK, so let’s dig a bit. First, what is the actual source for this?

The news about the poll came to me via PoliticusUSA.com.

Is that a satire site? Nope, they are quite serious, and while clearly very much in the democratic camp, they do tend to not just make stuff up but instead cite links to the sources for their articles that you can check yourself. We can perhaps test this by first looking at the article itself, and then following the links to see where they lead and what that reveals.

The article itself is here and reveals …

… The PPP survey also found that 2/3rds of Republican voters do not believe in global warming, and 49 percent do not believe in the theory of evolution. Not only do they wish to establish a national religion, but it appears that their version of Christianity is one that is at odds with the scientific consensus in climatology and biology.

While a clear majority of Americans self-identify as Christians, most Americans outside the GOP, would be uncomfortable with conservative Dominionist theology. Dominionism calls for imposing a theocracy in America where Christianity is declared the official religion, and the nation is governed by “Biblical law”.

Republican voters seem all too eager to embrace Dominionist theology, even though doing so would violate the First Amendment to the U.S. Constitution.

Wow … OK, interesting, and it also aligns with my own personal political bias, but I do still need to seriously challenge it and ask if this is really true even if it does align with my own bias.

The source is Public Policy Polling, so are they real and do they have a good reputation?

Basically yes they are quite real, and yes they do have a good reputation. To quote the Wikipedia page on them …

Public Policy Polling (PPP) is a U.S. polling firm based in Raleigh, North Carolina.[1] PPP was founded in 2001 by businessman Dean Debnam, the firm’s current president and chief executive officer.[2]

PPP is described as one of the “most accurate” polling companies[3][4] with a tendency to slightly lean Republican.[5]

It might perhaps be worth pointing out that this poll is over a year old, and is not current. However, given the various revelations regarding the support amongst Republican evangelicals for Donald Trump, a deeply flawed individual, this poll makes it clear that their desire to jump into bed with him is underpinned by a deep lust for power by proxy to enable them to impose their beliefs upon all. In other words, ignore the Trump racism and intolerance, hold their noses and align with him so that the supreme court can be stacked in their favour and thus move towards their vision.

You can find the actual PDF for the poll here … and yes, the PoliticusUSA is accurately reporting the content of it.

The big challenge being faced is not Donald Trump, he is very much at this point in time positioned to be completely wiped out in a landslide by Hillary Clinton. I should add that it is not a done deal, he just might stop being stupid (highly improbable), but we should still be wary that he could win.

The point I’m making is this – if he wins, we clearly have a huge problem, however even if it is a landslide for Hillary (and rationality), we still have a huge problem, because the fundamental issue has never really been Trump, but is instead all those millions that have happily supported a racist narcissistic xenophobic misogynist who has proven himself over and over to be one of the most dishonest candidates to ever set foot in the political arena.

As a quick reminder, these are the same people who when polled by PPP happily revealed …

“Ah”, you might think, “These were all tea party nuts”. Nope, 60% of those polled confirmed that they were not tea party, only 27% did while the rest were not sure.

When Trump is gone, and I’m now inclined to be increasingly confident that this will be the case (yea), then those that happily supported him will still be out there. That perhaps is, and always has been, the real worry. In other words it is not about a broken educational system, nor is it about stupidity. Both of those are easy answers, but also wrong. Instead it is really all about people believing things that are not true at all, and then being inspired to impose those beliefs upon others because they are wholly convinced that the belief is the only right answer.

This is not about belief vs non-belief, but rather is about retaining the freedom to believe whatever you wish or to not believe at all vs a dictatorship by one specific variation of belief.