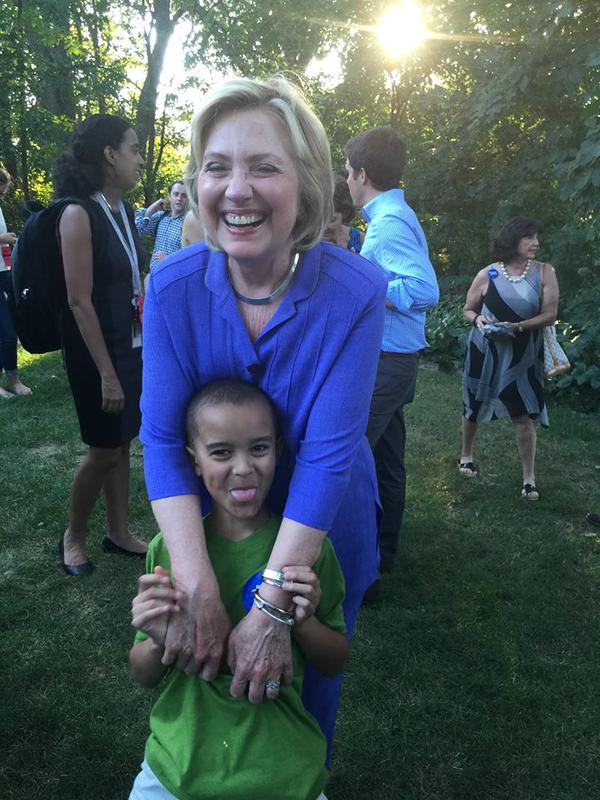 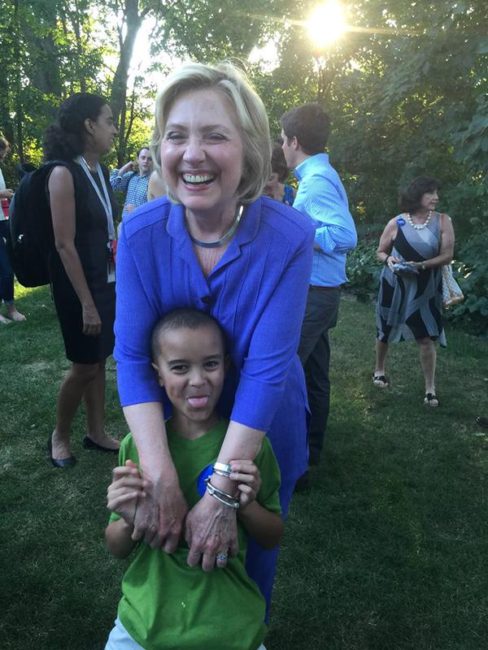 There exists a persistent myth that there is something highly dubious about Hillary Clinton and that many are voting for her simply because the Republican alternative is even worse. Generally I see claims pop up on FB asserting that she is dishonest and when asked, the common reply is some variation of “Clearly you have not been paying attention“, which to be frank, I simply translate to mean, “I’ve seen lots of stuff about her on Facebook“.

If pressed, you might be advised that what happened at the DNC was clearly fraud and that she “stole” the nomination, or that her handling of emails on a private server was tantamount to treason, or … well you get the idea.

However dig a bit, and what you soon discover is that almost all of these claims are simply not true at all. If you are buying any of it, then you are embracing myths as truth.

The Chasm between public perception and who she really is

Clearly there exists a huge chasm between the real human named Hillary Clinton, and the prevailing political mythology that she is lying and corrupt. Most of this mythology circulates as an obvious “truth”, so it is perhaps appropriate to spell out a few facts.

Those that are closest to her trust her

In a stark contrast to Trump, those that have worked with her and really know her have the deepest respect for her. The list is not a short one, but instead is long and consists of some of the most trusted and highly respected individuals on the planet.

Additionally, here is the official and very long list of those endorsing her. Ask yourself this, are they all seriously prepared to put their reputations of the line by endorsing a lying and corrupt individual?

There has been a year long investigation of the 55,000 emails and despite claims that she was just about to be indicted for treason and the sharing of classified information, it turns out that none of those emails, not one, was marked “Classified”. What was found is that just three bore markings somewhere in the body suggesting that they were classified. However, FBI Director James Comey did confirm that they were improperly marked as such.

There really is nothing to any substance to any of this at all. In a rather stark contrast, the two previous Republican’s that where were secretary of state, Condoleezza Rice and Colin Powell, both had private email servers, and both did route classified emails through them. The department of defence confirms that to be factual, so why exactly are they not be held to the same standard?

Then we have Benghazi

More investigations principally being driven by a desire to discredit her that also turned out to be about nothing of any substance at all. The final report after the $7 million investigation found nothing …

Ending one of the longest, costliest and most bitterly partisan congressional investigations in history, the House Select Committee on Benghazi issued its final report on Tuesday, finding no new evidence of culpability or wrongdoing by Hillary Clinton in the 2012 attacks in Libya that left four Americans dead.

The DNC Rigged the primaries

The are claims that the Wikileaks emails show that the DNC primaries were rigged. If you believe that then it is perhaps understandable because the claim has been circulating. One small flaw, it is not actually true, the wikileaks emails do not show that at all.

All this smoke might lead many to conclude that there is something of some substance to the claims concerning her, but if pressed to ever produce anything of any actual substance, nothing has turned up … ever.

In 2008, I was one of the most ardent Hillary Clinton haters on the planet. I was ferocious about how much I didn’t want her to win the primaries, and I rejoiced the day she gave her concession speech.

…Her tenure as Secretary of State, of course, led to the bogus email scandal, which in turn led to the slow-drip release of the emails on her home server. I decided I was going to read them.

… In those emails, I discovered a Hillary Clinton I didn’t even know existed.

And everywhere she went, her concern for women and children was clearly the first and foremost thing on her mind.

…The Hillary caricature you see in the press is not the Hillary Clinton I came to know by reading those emails.

She is fundamentally honest

Factcheck all the candidates on what they have said in public and the individual who pops to the top of the list is not a surprise. Trump is one of the most dishonest candidates to have ever emerged with almost everything he says not being true. As a rather stark contrast you find that both Hillary and Obama sit right at the other end of that spectrum.

If indeed you truly feel the Hillary is fundamentally dishonest, then who exactly are you supporting, why, and where do they sit on that scale? 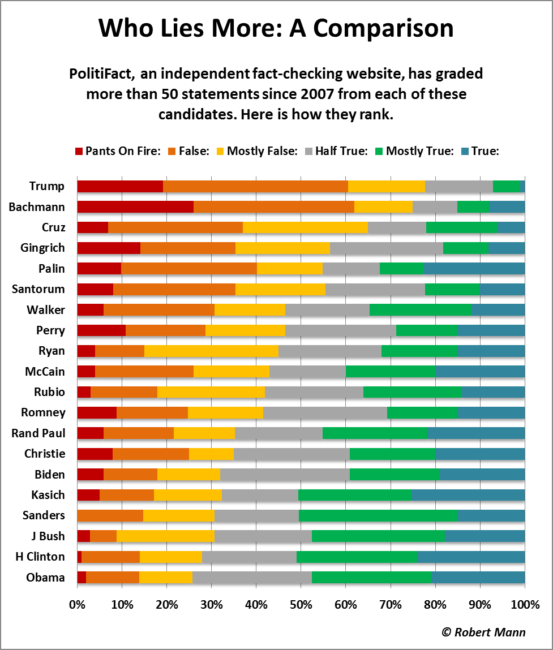 You might or might not agree with specific things such as globalisation or US foreign policy. If your disagreement with a candidate is rooted in such things, and you have a robust understanding of where a candidate stands on such issues, then your are most probably well positioned to make a meaningful voting decision. If however you are simply voting against a candidate because you are buying into the prevailing political mythology, then you are in effect being played.

Make a fact-based choice and not simply an emotional one founded upon myths that have no actual substance.

Why all the Myths?

There is one specific attribute that might perhaps explain why she has had to learn to tolerate and handle with dignity the constant flow of unprecedented and completely fictitious abuse, she has the wrong gender.