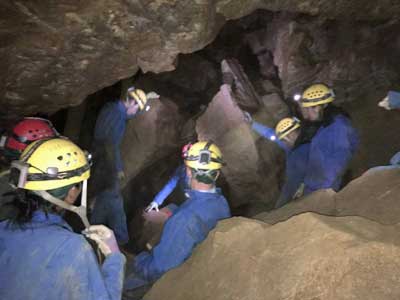 The US National Park Service strives to take the most reasonable evidence-based stance possible for all decisions and policies. I have a personal example that involves a chat with an NPS employee, a student volunteer who was in a second season of taking people caving. I don’t mean a walk, but instead putting on all the equipment, and crawling through some very tight nine-inch gaps deep under the ground and getting very muddy. This is where you not only get a cool experience, you also get a geology lecture. I did ask what the stance is when faced with somebody who is quite convinced that planet Earth is only 6,000 years old. The ranger advised, “We present the science-based evidence, but handle it with respect and don’t get into an argument“. Now that is sensible.

So what happens when politics gets into the NPS mix?

Well, that perhaps leads to the water-bottle fiasco I’m afraid, so here is that saga.

Back in 2011 the National Park Service banned the selling of disposable plastic water bottles. The idea was to bring a halt to the rising tide of empties cluttering up pristine trails and also to reduce costs. These bottles don’t magically vanish, somebody needed to go collect them all. Once they have them, they then needed to be recycled in an appropriately environmentally friendly manner. I truly do get it. It is really not a great message for the NPS to be filling up landfill sites with it all.

So they banned the sale of plastic bottles.

Now don’t misunderstand this. Common sense did of course prevail. Water is a necessary part of any NPS experience. If you hike, then you will know that a key limit of any hike in a very hot dry climate is the need to carry enough water, so they did of course sell refillable bottles and install water stations.

Side note: if you try to hike down the trail into the Grand Canyon from the popular South Rim, then you will not only find signs telling you about people who hiked the trail and died due to lack of water, but roughly about a mile or two down you will probably encounter a Park ranger who will politely engage with you, make sure you have the right gear, verify that you have enough water, and that you also know exactly where the water filling stations are. I’m not sure if that was just the local rangers being pragmatic and sensible, or if it was policy to do this. Either way, I do get it. When people fail to return, they have to go find you, so stopping people from doing something fatal makes a lot of sense. Going down might have been optional, but the really hard part, coming back up, was mandatory, and they simply want to make sure that the return journey does not involve them carrying your body.

Did the water bottle ban work?

There is a report that was obtained via a Freedom of Information Act request.

This report summarizes the environmental benefits associated with the policy as of 2016; describes the monitoring and continuous improvement efforts taken by NPS; and identifies future program activities as required in Section E of the policy.

So did it work?

This is the part where politics muddies the water with purely commercial interests.

The International Bottled Water Association lobbied long and hard. Their argument was that the ban  …

“removed the healthiest beverage choice at a variety of parks while still allowing sales of bottled sweetened drinks.”

… and while that sounds sensible, it was really a stance adopted to protect their commercial interests. There was never any instance of a park actually discouraging people from consuming water, they simply wanted that to happen via reusable water bottles.

The ban was officially lifted last month (Aug 2017). Here is the NPS announcement that the ban has been lifted …

WASHINGTON – In its commitment to providing a safe and world-class visitor experience, the National Park Service is discontinuing Policy Memorandum 11-03, commonly referred to as the “Water Bottle Ban.”

The 2011 policy, which encouraged national parks to eliminate the sale of disposable water bottles, has been rescinded to expand hydration options for recreationalists, hikers, and other visitors to national parks. The ban removed the healthiest beverage choice at a variety of parks while still allowing sales of bottled sweetened drinks. The change in policy comes after a review of the policy’s aims and impact in close consultation with Department of the Interior leadership.

Well yes, it adopts a positive spin on it all, but also latches on to the Bottled Water Association’s stance almost word for word. I must admit that is rather an odd. If you detect a distinct aroma of something a tad off here then you are not wrong.

The Washington Post ran a story at the time that told the real tale. It was a clear case of a Trump appointed lobbyist with a very clear conflict of interest being appointed to a Department of Interior leadership position …

The decision came three weeks after the Senate confirmation of David Bernhardt as deputy interior secretary. Bernhardt is a former lobbyist with the law firm Brownstein Hyatt Farber Schreck, which has represented one of the largest water bottlers in the United States, Nestlé Waters. Nestlé distributes the Deer Park brand.

Some Democratic senators called Bernhardt a “walking conflict of interest” during his confirmation hearing, because of his work on behalf of corporate interests opposed to Interior Department regulations to promote clean air and water.

This will now have clear environmental consequences.

In the pre-ban days, the Grand Canyon National Park estimated that water bottles constituted 30 percent of the 900 tons of garbage it recycled, and so that is what we have now returned to. Yes, the Bottled water companies are now back in the business of tapping into the 300 million visitors to NPS run parks annually, and yes, Tax dollars will now be spent cleaning up the literally millions of empty plastic bottles and disposing of them.

So what will they do with the quite literally millions of empty water bottles?

They will be gathered up, all 2 million per year, and dumped into some hole in the ground at taxpayers expense.

Hopefully it will not be the one pictured below, but knowing the way the Trump administration behaves I would not be astonished to discover if it had actually been seriously considered as a viable option.