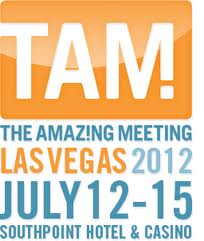 Tempting as it might be to write some notes on #TAM2012, I find that many others have done a far better job than I could ever aspire to achieve, so instead of inflicting my rather limited babbling upon you, I’ll simply point out some that I really liked.

Ah but also with one rather obvious constraint, I’ll limit myself to notes from folks who were actually there.

First up is Steven Novella, he blogs here on NeuroLogica … and also touches upon “the” hot topic …

Overall I was surprised by how little this issue was brought up, at least to me. I am closer to the issue than most as Rebecca Watson, my co-host on the SGU, is at the center of this controversy. Perhaps that kept some people from raising the issue directly with me.

However, the issue was there. This is a very touchy topic with strong feelings on all sides, and it is not my intention to do a thorough analysis here. The core issue is the experience that women have at these types of events, the degree to which they feel safe and welcome, and the response of conference organizers to the issue and the way it has been discussed publicly. From talking to various people about the issue (when it did come up) the consensus seems to be that the issue is real, but it is unfortunate how it has played out so far, and can’t we just move forward in a constructive, mature, and professional manner

Sharon Hill (of I doubt it) also (as always) has a nice write up. She starts with …

I’d call it an overwhelming success at bringing people of like minds together to meet, share and discuss. We also laughed, hugged, congratulated and complained.

Yep, that more or less nails it in one sentence … (well OK two). She also observes …

TAM is not an event about dogs, games, comics, movies, whatever. It’s about people’s thinking, health, belief and well-being.

It’s about understanding other people in order to bring them around to a rational way of looking at the world. It’s about meeting people who share your views, people you can add to your circles, those you can go to and rely on.

Go read it all, you will not be disappointed. I also observe that one commenter on her posting notes …

…you could walk through the Del Mar in the evening and catch snippets of discussions of serious issues, and even some disagreements, but in person, in real life, they didn’t devolve into shouting matches. As an eternal optimist, I feel there was great progress with people who like to advocate skepticism itself, and I’m not worried about any schisms, since I don’t feel they’re schisms within skepticism, but instead schisms over what conferences should be about.

One of the most outstanding talks (for many) was by Pamela Gay. The videos of the various talks are not up yet, and when they are you will be able to watch it yourself. However, the text is already available and is here – Make the world better.

Tim Farley has also grown a very nice collection of #TAM2012 videos on Lanyrd here. In fact, you can get a good view of all that happened here. You can also find …

Pictures … Brian Engler has uploaded 287 of his best pictures to facebook here (and yes, thats me speaking in two of them).

There is of course much more to write about and tons of stuff to link to, the above is simply a quick taster. Personally, I’m looking forward to the videos of the talks being posted … I’ll alert you when they go up.