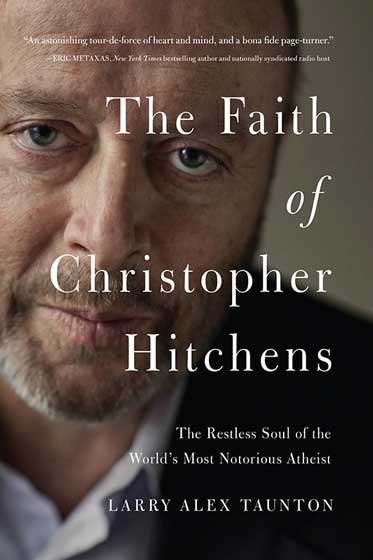 It is perhaps inevitable that claims of deathbed religious conversions pop up for most well-known people, because religion is basically an emotional experience and not an intellectual one, so an appeal to your emotions that runs along the lines of “Look, here is somebody famous who converted, you should do so as well”. The problem with such emotional appeals is that when you investigate, you often discover that it is not actually true at all.

A rather famous example is the supposed deathbed conversion of Charles Darwin, that never actually happened, but still gets repeated as a fact and has developed into a popular bit of religious urban folklore.

The latest example is the claim by a Christian Author that Christopher Hitchens was seriously contemplating conversion, and the evidence we have for this claim is … exactly nothing at all, we just have to take his word on it.

As part of an interview about his new book on Christopher Hitchens, the author, Larry Alex Taunton, claimed …

“I discovered Christopher is not defined by his atheism,” Taunton said. “Atheism is a negative and you can’t build a philosophy around a negative. Christopher was searching for a unifying system of thought. They’re accusing me of saying he converted. I make no such claim. It’s not my claim that Christopher converted, it’s that Christopher was contemplating conversion. I think I substantiate it in the book.”

This has been rapidly picked up and is now being repeated on an assortment of various Christian websites, for example Charisma News here, but this is not exactly new, and as an example, here is a claim that he actually converted from Last Sept.

Mr Taunton, the source of this latest claim, might indeed think that he substantiates this claim within his book, but those who have reviewed it or knew Mr Hitchens very well, disagree …

Steve Wasserman, who was Hitchens’ friend for 30 years, co-executor of his estate and with Hitchens’ family at his death, called the book’s claims “petty” and “appalling” when they were read to him.

“I am not in the position to dispute what Taunton says were private conversations,” he said by phone from New Haven, Conn., where he is executive editor-at-large for Yale University Press. “But I really think it is a shabby business. It reveals a lack of respect. This is not a way to debate Christopher Hitchens’ beliefs — to report unverifiable conversations, which amazingly contradict everything Christopher Hitchens ever said or stood for.”

Benjamin Schwarz, Hitchens’ editor at The Atlantic, where he published some of his best work, said, “That Christopher had friends who were evangelicals is testimony to his intellectual tolerance and largeness of heart, not to any covert religiosity.”

And Michael Shermer, an atheist and founder of Skeptic magazine, who read the book’s manuscript and liked its description of the friendship between the two men — enough to give it a favorable jacket blurb — said Taunton’s claims of Hitchens’ flirtation with conversion were “exaggerated.”

Perhaps the best person to comment on his potential for a deathbed conversion is Mr Hitchens himself. Here is an interview with him in which he is asked about this, and at the 3:30 mark he is asked for his thoughts on the observation that people are praying for him …then at the 08:00 mark he is asked if he might want to hedge his bets and take on a bit of religion. In reply he makes it very clear that if you hear such a rumour it is simply not true.

Let’s play ‘what if’ for a second, and pretend that it is all true, that Mr Hitchens really did convert, would that then change anything for anybody anywhere?

Nope, and that is because those that do believe tend to do so for emotional reasons, not because there is any evidence for the various religious claims. When somebody embraces a belief the word deployed is “faith”, and that basically means accepting something as true on the basis of insufficient evidence, which to be frank is weird, but when you factor in human psychology and the emotions that drive us, is also how humans behave.

When humans then proceed to pretend that somebody famous did convert, or perhaps was just about to convert, on the basis of no evidence at all, and at complete odds with everything that they ever said or wrote, well that is perhaps this “faith” coming into play to craft an illusion that is designed to manipulate you. In this case it is a tad deliberate because the goal here is to simply get you to buy the book that Mr Taunton is selling. I should perhaps add that if you are considering reading his book, then you do need to consider that the tags on the back should not simply be “religion” and “faith”, but also “fiction”.

3 thoughts on “The non-conversion of Christopher Hitchens”