Wow, this one truly surprised me … not.

Yes indeed, UKIP do appear to be quite determined to corner the market in complete and utter lunacy, and to be frank they scare me a bit. I worry that there are rather a lot of disillusioned Torys who simply can’t make the leap to Labour or LibDem, and might gravitate to UKIP.

So anyway, the news that has triggered me today is this from the National Secular Society …

Nigel Farage has said that Christianity is a “significant part” of his “vision for the future of Britain” in a special message on “UKIP Policies for Christians.”

The UKIP leader wrote that the UK is “fundamentally a Christian nation” and added that Christianity “should be recognised by Government at all levels.”

“Sadly, I think UKIP is the only major political party left in Britain that still cherishes our Judaeo-Christian heritage. I believe other parties have deliberately marginalised our nation’s faith, whereas we take Christian values and traditions into consideration when making policy.”

Yes indeed, bugger all that critical thinking and evidence, let’s turn to an imaginary friend when deciding the best public policy.

It should of course not be a surprise, UKIP are after all the same folks who promoted the idea that being gay causes bad weather.

We should also not forget that they have also promised that they will ban the teaching of climate change in schools if elected.

We will still ban Al Gore’s video for use in schools if I’ve got anything to do with it. I will not have much opposition within the party. It is, of course, not just this video which needs banning; all teaching of global warming being caused in any way by carbon dioxide emissions must also be banned.

So with that thought in mind, here is what the BBC weather forecast might be in a few weeks if too many vote for the anti-science party that promises to impose mythological traditions as policy upon everybody. 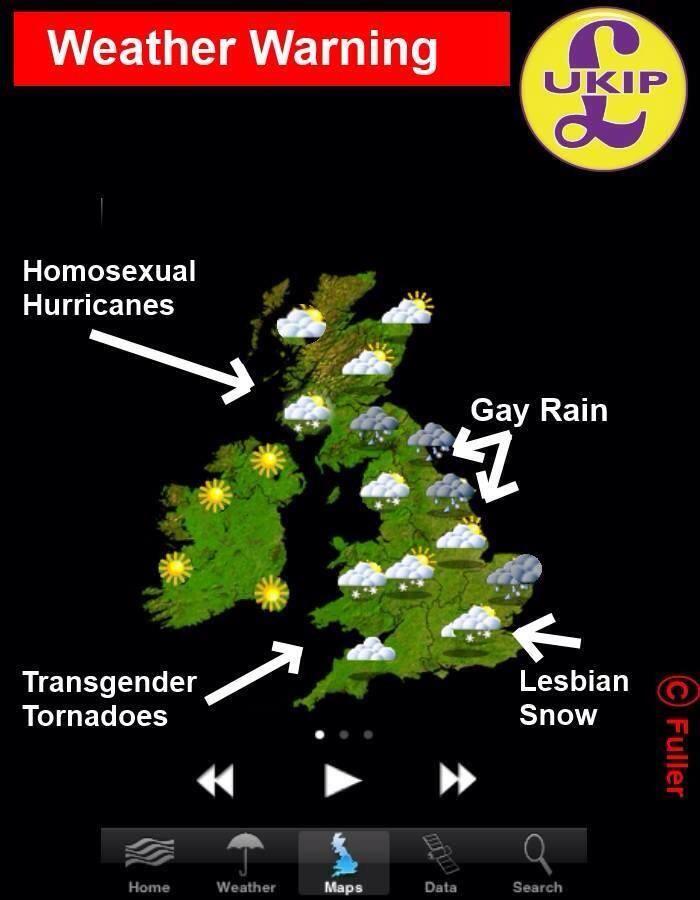