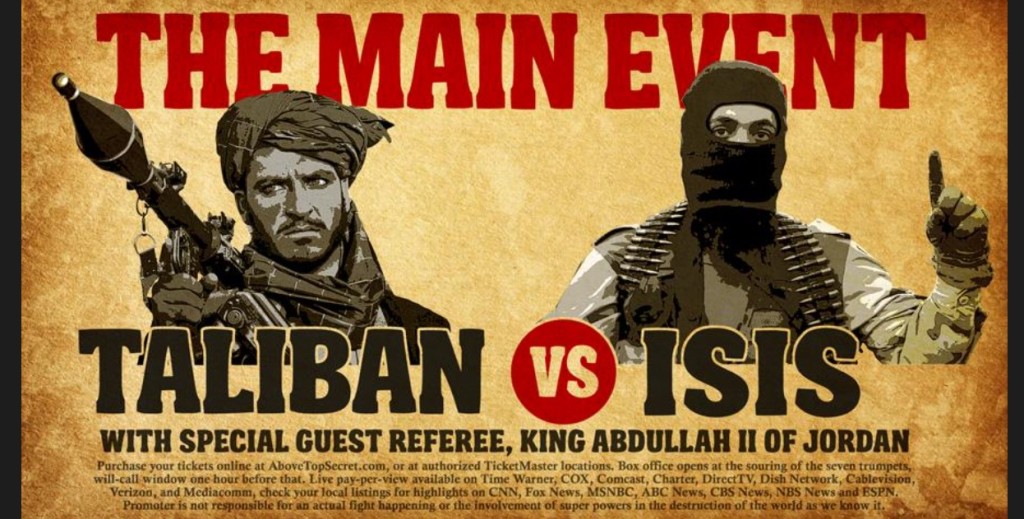 The Islamic State of Iraq and Syria (ISIS) chief Abu Bakar al-Baghdadi has called the Taliban supreme leader Mullah Mohammad Omar a fool and an illiterate warlord, according to Liveleak. This is apparently part of the ISIS vs Taliban Jihad announcement.

ISIS also claim that they have racked up much more street cred in the last 2 years than Taliban had in the past decade; which is kind of true. ISIS are the new kids on the beheading block – younger, edgier with their own Twitter handles and everything.

And the ISIS HR guys had been poaching Taliban fighters by the hundreds in Pakistan, according to Pakistani intelligence. Nabi Jan Mullahkhil, police chief of a province in Afghanistan told a local radio channel that he’d seen documents revealing that both the groups had announced Jihad – the holy war – against each other.

Mashaal Radio has published a report stating that Daesh and Taliban group have announced Jihad against each other.

Nabi Jan Mullahkhil, police chief of southern Helmand province has told Mashaal Radio during an interview that he has received documents in which both the terrorist groups have announced Jihad against each other.

It might not be, I quite frankly do not know, and so I would recommend digesting this along with a health dose of skepticism. It may in fact be simply two local religious gangs of thugs at war with each other over the control of the drug trade in Helmand province …

… but if indeed true, and the scope is that the bulk of ISIS and all of the Teliban have declared war on each other then it would be time to sit back, break out the popcorn, and watch as two extremely violent intolerant variations of Islamic fanaticism proceed to digest and obliterate each other.  This also is perhaps the one and only time when we would all truly wish both ISIS and the Teliban the very best of luck and lots of success.