In a rather sudden announcement on a labour day weekend, the James Randi Educational Foundation has announced that they are closing their LA office and moving their operations to Virginia in order to save money, that DJ Grothe is no longer with the JREF, and that this restructuring is all part of an enhanced educational agenda. 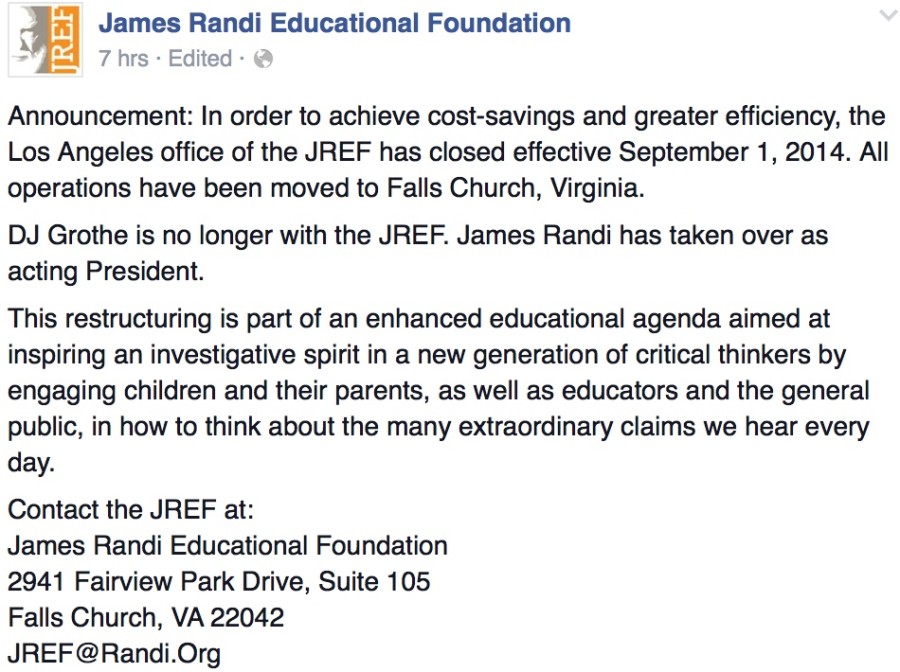 That is all we know, and anything else you read or hear is pure speculation right now.

Personally, it does strike me a rather odd that an “enhanced educational agenda” is what drives an organisation to fire its president, and also suddenly out of the blue close its office and relocate to the other side of the continent.

What has not been said is also rather odd. Absent is the usual politically correct waffle such as, “The JREF would like to thank DJ for … “, etc..

When first announced on Facebook, by the JREF account, the first word “announcement” had not been spelled correctly, but that has now been fixed. That initial typo led me to speculate that the account had been hacked. Then shortly after, a comment on the above Facebook announcement appeared from the JREF account asking people to not comment – seriously! – asking people on social media where commenting is the norm to not comment on a public posting – and then even later that comment itself has now been purged, and has been followed by this apology …

I think they need a new Social Media manager.

So is this really all about saving money?

It’s a reasonable explanation, if you look at JREF’s 990s it shows a pretty significant decrease in revenue over the past few years and usually when that happens, the guy at the top tends to move on … and yet such departures are not normally announced like this.

There are obvious questions, beyond the rather obvious “what happened?”, such as what does all this mean for The Amazing Meeting. I guess all that will emerge in due course.

Personally, I’m sad to see DJ go, he did well and I wish him well for the future.

(I’m also sure many rage-bloggers are happy and now that the knife has been stuck in, will be happily giving it a personal twist or two)

What I can also observe is this – if you ever needed an example of how not to announce major changes, then this is it. As one commenter has pointed out …

1 thought on “Dramatic and very sudden changes at the #JREF”