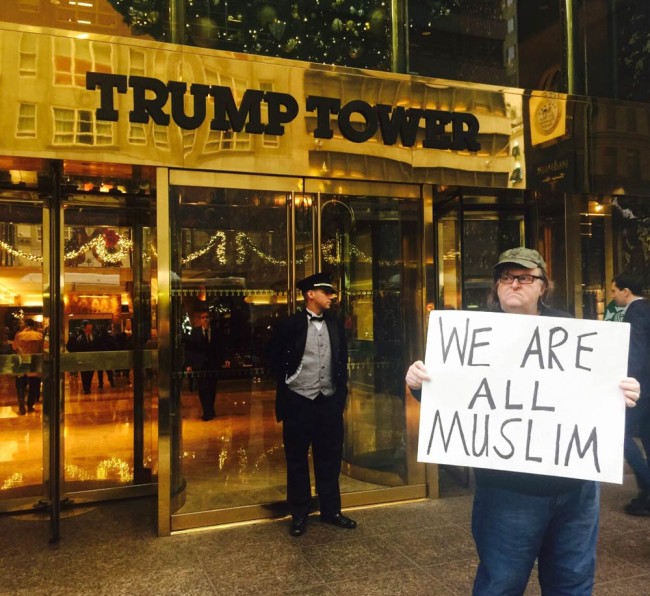 Michael Moore, the documentary filmmaker, screenwriter, author, and journalist, went and stood outside Trump tower with a sign that reads “We are all Muslim” (pictured above), then when finally moved on by the police, he went home, sat down and wrote Mr Trump the following letter …

You may remember (you do, after all, have a “perfect memory!”), that we met back in November of 1998 in the green room of a talk show where we were both scheduled to appear one afternoon. But just before going on, I was pulled aside by a producer from the show who said that you were “nervous” about being on the set with me. She said you didn’t want to be “ripped apart” and you wanted to be reassured I wouldn’t “go after you.”

“Does he think I’m going to tackle him and put him in a choke hold?” I asked, bewildered.

“No,” the producer replied, “he just seems all jittery about you.”

“Huh. I’ve never met the guy. There’s no reason for him to be scared,” I said. “I really don’t know much about him other than he seems to like his name on stuff. I’ll talk to him if you want me to.”

And so, as you may remember, I did. I went up and introduced myself to you. “The producer says you’re worried I might say or do something to you during the show. Hey, no offense, but I barely know who you are. I’m from Michigan. Please don’t worry — we’re gonna get along just fine!”

You seemed relieved, then leaned in and said to me, “I just didn’t want any trouble out there and I just wanted to make sure that, you know, you and I got along. That you weren’t going to pick on me for something ridiculous.”

“Pick on” you? I thought, where are we, in 3rd grade? I was struck by how you, a self-described tough guy from Queens, seemed like such a fraidey-cat.

You and I went on to do the show. Nothing untoward happened between us. I didn’t pull on your hair, didn’t put gum on your seat. “What a wuss,” was all I remember thinking as I left the set.

And now, here we are in 2015 and, like many other angry white guys, you are frightened by a bogeyman who is out to get you. That bogeyman, in your mind, are all Muslims. Not just the ones who have killed, but ALL MUSLIMS.

Fortunately, Donald, you and your supporters no longer look like what America actually is today. We are not a country of angry white guys. Here’s a statistic that is going to make your hair spin: Eighty-one percent of the electorate who will pick the president next year are either female, people of color, or young people between the ages of 18 and 35. In other words, not you. And not the people who want you leading their country.

So, in desperation and insanity, you call for a ban on all Muslims entering this country. I was raised to believe that we are all each other’s brother and sister, regardless of race, creed or color. That means if you want to ban Muslims, you are first going to have to ban me. And everyone else.

We are all Muslim.

Just as we are all Mexican, we are all Catholic and Jewish and white and black and every shade in between. We are all children of God (or nature or whatever you believe in), part of the human family, and nothing you say or do can change that fact one iota. If you don’t like living by these American rules, then you need to go to the time-out room in any one of your Towers, sit there, and think about what you’ve said.

And then leave the rest of us alone so we can elect a real president who is both compassionate and strong — at least strong enough not to be all whiny and scared of some guy in a ballcap from Michigan sitting next to him on a talk show couch. You’re not so tough, Donny, and I’m glad I got to see the real you up close and personal all those years ago.

We are all Muslim. Deal with it.

All my best,
Michael Moore

P.S. I’m asking everyone who reads this letter to go here and sign the following statement: “WE ARE ALL MUSLIM” — and then send post a photo of yourself holding a homemade sign saying “WE ARE ALL MUSLIM” on Twitter, Facebook, or Instagram using the hashtag #WeAreAllMuslim. I will post all the photos on my site and send them to you, Mr. Trump. Feel free to join us.

A Few Further Thoughts on #WeAreAllMuslim

The essence of the American dream is freedom … freedom to be who you are, true to yourself, and to believe whatever you wish. The first 10 amendments to the US constitution are specifically all “Bill of Rights” issues, and as a quick reminder Number 1 reads …

Congress shall make no law respecting an establishment of religion, or prohibiting the free exercise thereof; or abridging the freedom of speech, or of the press; or the right of the people peaceably to assemble, and to petition the government for a redress of grievances.

The real acid test comes when those that passionately embrace this ideal are faced with a belief that is very very different than the belief they embrace.

Mr Trump has openly declared his proposal to have a ban on all Muslims from entering the US.

The response to this xenophobia really does separate the men from the boys and we get to see who really does embrace the ideals expressed within the US Constitution, and who in reality is actually opposed to some very basic core values.

Speaking out against what he has said matters, because Trump is now some random kook that we can happily roll our eyes at and then happily ignore, he is currently the leading GOP candidate for election as US President in 2016 and has a lot of support.

Meanwhile over in the UK, there is a petition to block Trump from entry to the UK, and it has been so popular that it has established a record for the UK Government’s petition website (You can join in and sign it here), so far (as I type this) 562,257 others have. To put that in context, it is not a simple click and forget poll, you have to make some effort – you register a UK address, confirm you are a UK citizen and live at a UK address, then they verify that by getting you to click a link in an email they send, so that number reflects a lot of people who felt strongly enough to go through all that hassle.

Criticism of an idea such as a religious belief is fine, so you can happily declare the Quran or some or all variations of Islam to be superstitions nonsense. However, discrimination of people for simply believing something you don’t is a breach of universal human rights, namely freedom of thought.

How much more do we need for people to grasp that Trump has crossed the line here, and wants to use religion to discriminate, need I remind you of a specific episode in 20th century history that saw that being deployed. Have we not already endured a sufficient number of centuries of such discrimination, to be able to turn our backs on this and robustly criticise it?

I despair that despite all that, Trump has seen a surge of support and is the leading GOP candidate, and yet I do also retrain sufficient degree of confidence to appreciate that if indeed the GOP has gone quite collectively insane, the vast majority of the US population has not, and would, if he was endorsed as the candidate, more or less wipe out the GOP at the actual election.

They flee to us, not because they wish us any harm, but because they seek our help and a place to be safe. They are not the perpetrators of violence or a threat, but rather they are the victims.

Trump is doing exactly what ISIS wants, he is isolating them and leaving them with no place to turn to. It sends a message that tells them that what ISIS claims is true, that we hate them, and lays a foundation for them to be ensnared by some very bad ideas, a variation of Islam that inspires things we all robustly reject.

Many who reach into their pockets to pull out an iPhone and tweet support for Trump’s suggestion that we ban all Muslims, especially Syrian Refugees, tend to forget that Steve Jobs, the chap who made the iPhone possible, was himself the son of a Syrian who fled the middle east in 1952 and came to the US as a student.