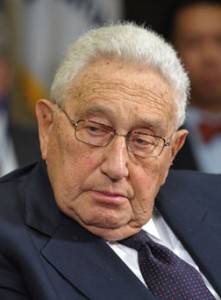 Within his latest Slate article (Dec 13), Hitchens is gunning for Nixon and Kissinger …

Henry Kissinger should have the door shut in his face by every decent person and should be shamed, ostracized, and excluded …his role as the only unindicted conspirator in the Nixon/Watergate gang, and since the exposure of his war crimes and crimes against humanity in Indochina, Chile, Argentina, Cyprus, East Timor, and several other places. But the latest revelations from the Nixon Library might perhaps turn the scale at last. (Click here to listen to the conversation; the offending section begins at 13:56.)

Chatting eagerly with his famously racist and foul-mouthed boss in March 1973, following an appeal from Golda Meir to press Moscow to allow the emigration of Soviet Jewry, Kissinger is heard on the tapes to say:

In the past, Kissinger has defended his role as enabler to Nixon’s psychopathic bigotry, saying that he acted as a restraining influence on his boss by playing along and making soothing remarks. This can now go straight into the lavatory pan, along with his other hysterical lies. Obsessed as he was with the Jews, Nixon never came close to saying that he’d be indifferent to a replay of Auschwitz. For this, Kissinger deserves sole recognition.

You can read the full article by clicking here.