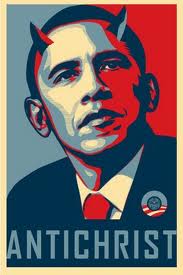 I just came across an old article in the May edition of Scientific American by Steve Mirsky. Apparently Harris Interactive conducted an on-line survey in March regarding what folks in the US thought of President Obama, and (as you might expect) the results proved to be rather startling … for example, Steve reports …

40 percent of those polled believe Obama is a socialist. (He’s not—ask any socialist.) Thirty-two percent believe he is a Muslim. (I had predicted that a Mormon, Jew, Wiccan, atheist and Quetzalcoatl worshipper would become president before America elected a Muslim, so a third of this country actually may be quite open-minded, in an obtuse way.)

However, the truly jaw-dropping statistic is that apparently …

… 14 percent believe that Obama may be the Antichrist. Of those who identified themselves as Republicans, 24 percent think Obama might be.

(thud) … yep, I ment it, that was the sound of my jaw bouncing off the floor … Steve was just as astonished, so suggested the following additional questions, for this bunch of kooks …

To measure the consistency of the responses of those who think Obama might be the Antichrist, we have prepared an extension of the poll.

Please answer the following questions “yes” or “no”:

* Do you consider your belief that Obama only might be the Antichrist to be a sign
of your open-mindedness and scientific outlook?
* Have you ever called a local TV news office because you saw an image of a major religious figure in (a) a piece of toast, (b) tree bark or (c) a Sheetrock water stain?
* Were you surprised that the president might be the Antichrist because, according to the movie The Omen III, the U.S. ambassador to England should be the Antichrist?
* Do you think Earth is only 6,000 years old?
* Have you had the fillings of your teeth removed to rid your person of the tracking devices placed by the government?

You can read it all by clicking here. If you check out the comments, you will begin to appreciate that a good percentage of Scientific American readers have zero sense of humor and also fail to grasp basic concepts such as Satire.