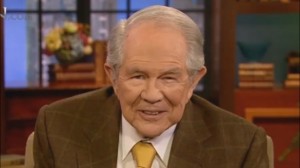 So here is how it plays out …

I can’t help but wonder how real any of this is, I can see at least three distinct possibilities here …

What is also interesting here is that this absurd rant is exactly what we expect from Mr Robertson, this is not an exception to his norm, nor is it even shocking, but rather this is exactly the norm we expect from him.

One other important observation – if indeed Mr Robertson assumes (incorrectly for no reason) that this is a middle-aged guy hitting on some young underage kid, then why oh why is he telling her to go see the “church elders”, what exactly qualifies them to deal with such an issue. If he truly believed this is indeed pedophelia, then his guidance should be to advise her to immediately phone the police – anything else invites a cover-up.

As for the concept of recruiting “impressionable youth”, no gay people don’t do that, but that is exactly what religious people do. They run tent crusades, youth camps, go into schools, and run youth clubs, all designed to target the 4-14 age group.

So in the end, if your irony meter has not yet been completely blown to bits, we should also observe that Mr Robertson is the guy who claims Christians are persecuted, yet in reality is actually the guy who is consistently whipping up a a frenzy of hatred and persecution that specifically targets people for the crime of being born gay.