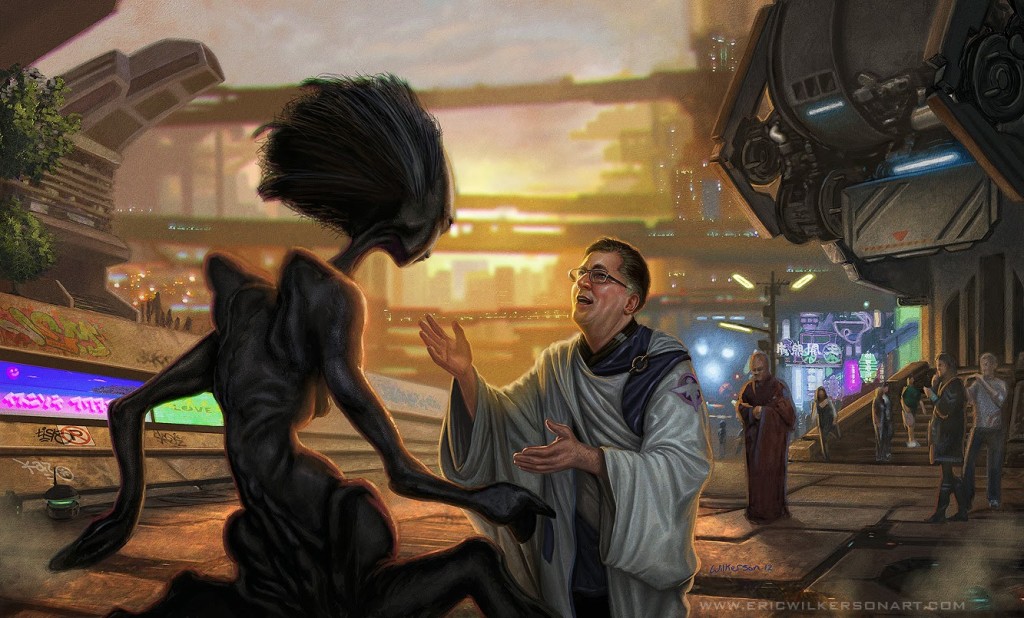 The Huff Po has an article that presents us with this …

Creationist Ken Ham, who recently debated Bill Nye the Science Guy over the origins of the universe, is calling for an end to the search for extraterrestrial life because aliens probably don’t exist — and if they do, they’re going to Hell anyway.

“You see, the Bible makes it clear that Adam’s sin affected the whole universe,” Ham wrote on his blog on Sunday. “This means that any aliens would also be affected by Adam’s sin, but because they are not Adam’s descendants, they can’t have salvation.”

Ken is quite frankly a religious nut and is quite sure that Planet earth is only 6,000 years old, so finding him touting yet more absurd nonsense should not be a surprise.

If you fact-check, you soon discover that Mr Ham claims the Huff Po article is not factual and that he made no such claim. He explains …

The Huff Po Article is based upon a blog posting by Mr Ham (click here to see it). In there he specifically writes this (starting at paragraph 8) …

You see, the Bible makes it clear that Adam’s sin affected the whole universe. This means that any aliens would also be affected by Adam’s sin, but because they are not Adam’s descendants, they can’t have salvation. One day, the whole universe will be judged by fire, and there will be a new heavens and earth. God’s Son stepped into history to be Jesus Christ, the “Godman,” to be our relative, and to be the perfect sacrifice for sin—the Savior of mankind.

Jesus did not become the “GodKlingon” or the “GodMartian”! Only descendants of Adam can be saved.  God’s Son remains the “Godman” as our Savior.  In fact, the Bible makes it clear that we see the Father through the Son (and we see the Son through His Word). To suggest that aliens could respond to the gospel is just totally wrong.

An understanding of the gospel makes it clear that salvation through Christ is only for the Adamic race—human beings who are all descendants of Adam.

Yep, he wrote it, the Huff Po article is factual

It should of course not be a surprise, because Answers In Genesis is the same group that claims …

If indeed you are the head of an organisation that in all seriousness promotes the idea that fire-breathing flying dragons and unicorns are real, then you really don’t have to worry about being discredited when other weird claims, such as “aliens are going to hell”, pop up.

Oh and as a punchline here, it is not all Ken, his article finishes with this gem …

This item was written with the assistance of AiG’s research team.

I dread to even try and get my heard around what is meant by the word “research” at AiG.

1 thought on “Bizarre Claim: Aliens are going to hell”