Kashif N Chaudhry, an  Muslim, writes that he carried out a social media experiment yesterday to see if new atheists’ onslaught on Yale Humanist Community was based on principle or prejudice. He concludes that verdict is out, and details it in his latest Huffington Post article. There he writes …

Ayaan Hirsi Ali is an extreme anti-Islam critic, well known for her bigoted views and dishonest generalizations of the Muslim faith.

OK, so as a Muslim he does not like the criticism his belief faces, I understand that, and so he disagrees with that criticism as well, and that’s fine, I also understand that rather natural emotional response. He then goes on to write …

When she was invited to speak at Yale’s Buckley program recently, some student groups — including the Yale Humanist Community — issued a statement criticizing the invitation. In their statement, the group of atheists, humanists and agnostics wrote: “Although we acknowledge the value of her story, we do not endorse her blanket statements on all Muslims and Islam… We believe Ayaan Hirsi Ali represents a sadly common voice in the atheist community that attacks and provokes, rather than contributes to constructive criticism or dialogue.”

The Yale Humanist community don’t agree with her, and that’s fine, but their protest also helped to get her banned and that’s not OK because that was a suppression of free speech, hence they have quite rightly faced rather of lot of criticism for that. Mr Chaudhry is perhaps happy that she was banned from speaking, and yet ponders over why the “free speech” of the humanists was being attacked …

Why was the free speech of a student group being attacked so vehemently, I wondered. And to answer myself, I carried out a social media experiment to see if the new atheists’ onslaught was based on principle or just prejudice.

I posed a simple question to new atheists on a social media page: “Suppose you were the Dean at Harvard, would you invite a homophobe or a racist to speak on homosexuality or race relations respectively?”

As you might imagine, many did indeed acknowledge that they would not invite a homophobe or a racist to speak, and so the argument he then develops is as follows …

The majority of new atheists who responded to my experiment, including fellow blogger and Pakistani ex-Muslim Ali Amjad Rizvi, responded differently. Ali insisted he would never invite a homophobe, or a racist, to speak at Harvard University at any cost. And if someone invited such a speaker, he believed students would have full right to protest the invitation. They would merely be “exercising their basic right to free speech” in doing so.

But then I asked why he — and other new atheists — got so bitter and upset when students that disagreed with Yale’s decision used this same right to free speech? Why were they branded “enemies of free speech” for exactly the same stance? No one answered.

And his punchline is as follows …

I had gotten my answer. The new atheists’ onslaught against the Yale Humanist Community was not based on any principle, but prejudice. This intellectual dishonesty by many new atheists is a symptom of a much larger obsession — deep-rooted prejudice against religion. Evangelical anti-theism, much like militant theism by extremist clerics in the theist world, detaches one from the important values of objectivity and fairness.

There is a distinction here that matters

OK, let’s be very specific and outline a clear distinction.

The following are acceptable forms of free expression, they criticise a belief, an idea:

In a rather stark contrast to the above, the following are not acceptable forms of free speech:

The first is not factual and is instead libellous. The second not only promotes discrimination, it also breaches “Freedom of Thought”. So Hopefully this helps to clarify for you what is and is not free speech.

So why is there confusion here?

A basic human right that is commonly advocated and also enshrined within the UN charter is the right to not be offended.

<You may now insert your stunned silence here>

Oh wait, that’s not a human right at all, it never has been and it never will be, and there perhaps rests the core of the problem.

People such as Mr Chaudhry hold beliefs that face criticism, and when that happens it is perhaps rather natural to confuse such factual criticism of ideas with hate speech, hence terms such as bigotry are deployed. This is perhaps because beliefs tend to be very personal and so it is all taken as a personal attack.

New atheists think it is “against free speech” to protest an invitation extended to an Islamophobe (eg Hirsi Ali) to speak and give their own perspective on Islam at a major university. Those who protest such an invitation are considered “enemies of free speech.”

But when I asked Ali A. Rizvi if the same rule applied to homophobes or racists, this was the response I got:

Ali said he wouldn’t invite a homophobe (or racist) to speak at Harvard ever. If someone invited such a person, students would rightly protest the invitation “exercising their basic right to free speech.” He would disagree with anyone who invites such a speaker.

Isn’t this the same position that student groups such as the Yale Humanist Community (who said the same thing when Hirsi Ali was invited) hold? ‪#‎PoeticJustice‬ ‪#‎ExposingBias‬

Does he really think all New Atheists take that exact stance? In fact, what exactly is a “New” atheist, is it perhaps a term that describes somebody who really really does not believe as opposed to those old atheists who do not believe. 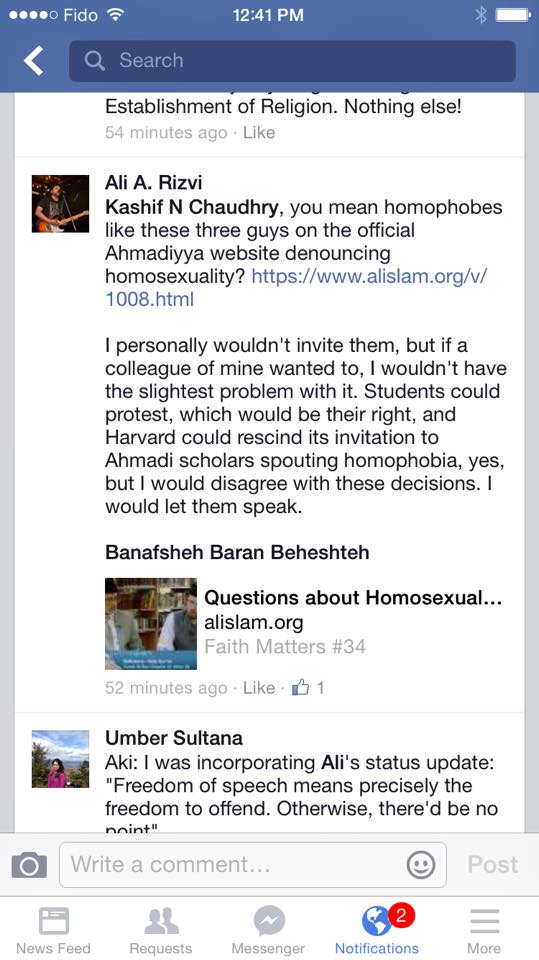 Oh … now that is indeed quite different than the stance that Mr Chaudhry claims that Mr Rizvi was making and so now things become a little clearer.

You see the problem that Mr Chaudhry faces is that he is an Ahmadiyya Muslim, and Mr Rizvi presented clear evidence within his response that they are openly homophobic. So when it comes to assertions regarding bigotry and basic human rights, Mr Chaudhry might wish to ponder on his own stance on all that a little further.

I do feel obliged to make one very positive additional observation. As an Ahmadiyya Muslim, Mr Chaudhry is generally in favour of free speech and secularism, is wholly opposed to all forms of violence, and is also very pro-science, and so while he and I might indeed disagree on what is and is not free speech and also disagree on topics such as homophobia, the very fact that we can openly and frankly have such a dialog in the first place can only be a good thing.