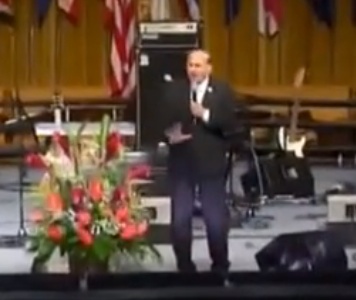 It always strikes me as more than a little bit odd when somebody pops up and claims that they have “proof” that god exists. Think of this this way, take the specific religious claim and replace the word “god” with something else such as “pink unicorns”, “magic” or “elfs” and the claim would simply result in the claimant being dismissed as a nut …especially when the “proof” consists of stuff like this at a prayer rally…

Quoting an old friend from back in Texas, Gohmert said that he feels sorry for atheists because regardless of how smart they think they are, they have to admit that they believe “the equation that nobody plus nothing equals everything.”

“How embarrassing for an intellectual to have to say ‘yeah, I believe that,'” Gohmert said. “Nobody plus nothing equals everything.”

“Well, you couldn’t get everything unless there was something that was the creator of everything,” Gohmert wisely concluded, “and that’s the Lord we know”

Ah sorry, I should have offered you a straw-man alert before guiding your forward into reading that, so please do accept my humble apologies, and I’m sure that the coffee will eventually come out of your keyboard, you really should not have been drinking it as you read that.

This is not how people who do not believe in a god actually think at all.

There are two very obvious rebuttals to that …

Where did god come from?

This is perhaps philosophy 101

If indeed he was to ponder where everything acme from, then asserting that a god did it, does not solve that problem because you them need to explain where this god came from. All he has done is to all in an additional layer of complexity for no reason at all, one that has no actual evidence.

The common response is “Ah but god is beyond time and space” or similar. How does he know this? Easy, he does not because that is simply making things up and the pretending that he knows this when he does not actually know that at all. We can just as easily say the same for the meta-universe, it is all beyond time and space and when we now have is simply a manifestation of the universe in its current form … but non-believers tend not to do that because this is not evidence for anything like that.

“I don’t know” is a good answer

When faced with things we simply do not know, then “I don’t know” is indeed the most honest answer. Anything else that pretends to answer such a question leads you down the road into the land of fantasy and also stops you from asking the question, and finding the real evidence-based answer.

He is of course free to make silly claims, and free to assert those silly beliefs, but by doing so he is demonstrating a degree of either gross ignorance or crass-dishonesty.

I suspect it is the former and not the latter, and it usually is because it is the result of living isolated inside a bubble and so is not actually familiar with what those that do not believe actually think.

So do you really want to vote into office an individual who does not have all the facts, but instead jumps to conclusions on the basis of just the views of one side of the conversation? I would like to think that those that vote for Rep. Louie Gohmert would one day pause and consider the consequences of voting for people whose policies are belief-driven and not evidence-based, but sadly we are a long way from that realisation sinking in.

1 thought on “Daft Claim: Congressman Can Prove God Exists With A Simple Equation”