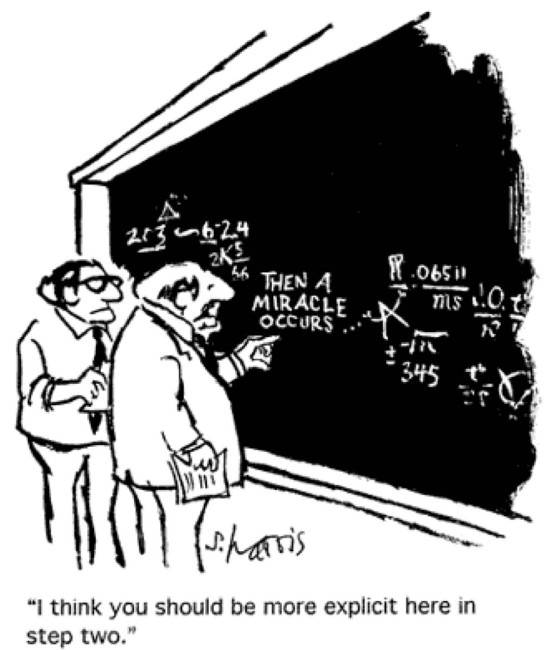 Oxford Professor Alister McGrath most probably truly does believe that faith will prevail over non-belief, but if you are expecting his claim to be a well-reasoned evidence based one, then I’m afraid that you will be rather disappointed to discover that it is not, but is instead the usual religious hand-waving.

The context here is that he delivered one of the annual Parchman Lectures at Baylor University’s Truett Theological Seminary, and it is there that he proceeded with a lecture billed as “Why Faith Makes Sense: Exploring the Rationality of Christianity”. Well that sounds interesting, and so if he can make a good argument for a faith based rational position then that would indeed be something quite new.

However, take a quick peek and you soon rapidly trip up over gems such as this …

The Christian faith, on the other hand, transcends reason, providing a more coherent perspective for understanding the world

So in essence his stance is that Christianity is both rational and coherent and to verify this he asserts that it is not rational.

How does that work?

With arguments like his, why exactly is that a surprise, in fact why is he complaining at all, because that is exactly what he is claiming.

He should perhaps consider dropping the words “new” and also “Atheism”, because neither is a prerequisite to grasping that “faith”, which in a religious context is basically believing stuff on the basis of no evidence at all, is both absurd and irrational.

Since he has been promoting the idea that non-belief is in decline for rather a long time, it should be no surprise to find that also pops up …

“But it’s in decline, because it’s stale, dull and incredible. It provides unsatisfactory answers to ultimate questions. People want to know more.”

Even while touting that claim for over a decade now, each and every year has yielded poll after poll that reveals the opposite to be the truth. He also asserts that this decline is because non-belief in absurd nonsense because it does not answer ultimate questions. I should of course point out that no belief actually answers any questions at all in any meaningful way, and while various answers are asserted, the precise quantity of objective evidence that verifies that these fantasies are in any way related to reality is exactly zero. I do agree that people want to know, but deploying fiction as fact is not the deployment of knowledge.

Atheists claim reality is only “what reason and science can demonstrate,” but that is “just wrong,”

… says a guy who is seriously attempting to use reason to argue against reason.

So his overall stance is basically that non-believing people believe things that cannot be proven and the example he gives is the universe vs multiverse hypothesis. That as an example is quite frankly weird, because it is part of an on-going debate and if challenged, nobody would seriously latch on to either as a “belief” and insist it to be true.

The ability to transcend reason, to see beyond the limits and through the gaps of rationality, is a major contribution of Christian faith

I do agree that this is a major contribution that Christianity has made, but to be quite frank, it has not been a positive one. The term we use to describe the manifestation of this contribution is “The Dark Ages”, and what got us out of that rut was a rejection of religious dogma, the deployment of reason, and the enlightenment.

I am quite sure that Alister McGrath is indeed a smart chap, and so the issue is not that he is being stupid, but rather that he is deploying his intellectual capability to try and dream up smart ways of rationalising irrational ideas and beliefs.

It is all very understandable, and he really has no choice but to take this road. His entire career and life has been emotionally and very deeply rooted in belief, so any attempt to consider the possibility that he just might be wrong is quite unthinkable.

In the end, if he really does wish to justify irrational beliefs by pleading that the foundation they rest upon goes beyond reason, well I do confess that I agree that he is indeed correct, it does all do just that.