There is a quick TL;DR; answer to the question, so if you are pressed for time then the answer there is “no, there is something else going on”.

So lets drill into all this by looking at a chap who is very much by choice in the public eye – Ben Carson.

As an example of his assertions we have this very recent gem on Twitter …(and yes, it is not a parody, it really is him) … 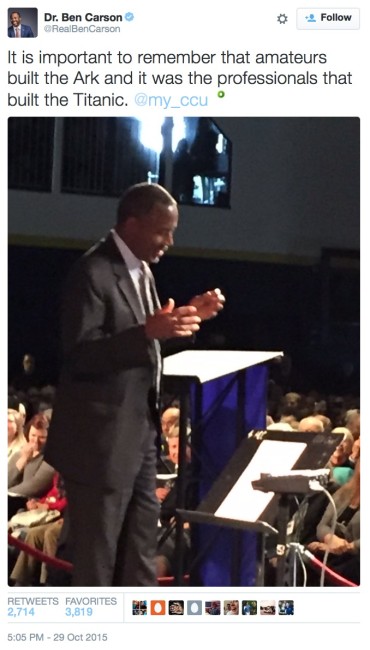 If you are struggling with that, then let me spell it out …

… and so the most immediate and rather obvious thought is to wonder how somebody could be so utterly and completely stupid.

No wait, that’s not strictly fair, because we all both say and do stupid stuff that we then later regret. It is a universal trait and part of the human experience, and so if this was an example of that, then he perhaps deserves a bit of slack.

No wait, that can’t be the case here, because he keeps coming out with stuff like this again and again in almost every debate and speech he makes, and so we have articles such as “13 ridiculous things Ben Carson believes” highlighting some of the truly stupid assertions he has promoted …

… all guaranteed to leave you deeply ensnared within one of those surreal WTF moments.

Nope, he is also rabidly anti-science and not only rejects well-established facts such as Evolution, but also rejects the prevailing scientific consensus on Climate Change.

OK, so yes, this guy is truly stupid.

Hold that thought for a moment …

If we wish to run with the conclusion the he is indeed truly stupid, then we would also need to explain the following …

… so clearly we have a truly weird juxtaposition here, an individual who is both brilliant and yet also stupid, how can this be?

There is an explanation

The one word that sums up the problem here is “Belief”. It is pervasive and while it manifests within different cultural contexts in distinctly different ways, the pattern remains consistent. Very Intelligent, highly-educated people gripped by “belief” can end up embracing utterly absurd conclusions about many things. High intelligence is perhaps a distinct advantage in this context, because you can deploy that intelligence to come up with really smart ways of rationalising utterly absurd ideas.

A mistake we often make is to perhaps fail to remember that belief is basically an emotional-cultural experience and not intellectual. It needs to be because that is the only way it can be universal. If it was indeed intellectual, then those that failed to rise to that understanding would be cut off. The many variations that prevail and thrive today succeed because they have adapted through natural selection an ability to hook into the human mind in a manner that will bypass our normal BS filters, and then tend to stick because once invested in something humans are reluctant to let go (As an example of that, you find that quite often people who invest in stocks that then drop in value, most often hang on to them because they just might rise in value one day, and are rather reluctant to crystallise their loss by selling before it drops even further).

Ben carson is 64 years old and has been deeply invested for almost his entire life in the Seventh-day Adventist Church. It is perhaps all part of what makes him tick and would also very much give meaning to everything that he does.

None of this would in any way impact upon his abilities as a surgeon, he was brilliant at that, and we should not lose sight of that. However, to move within the political arena requires a distinctly different set of skills. It is there that his weird beliefs bubble to the surface and so the press are now seriously pondering the thought that he truly is god’s gift to them.

We should also not forget that he has rather a lot of support. The evangelical voters are rallying around because the promotion of utterly absurd religious ideas is resonating within the minds of many of them.

Will he win the GOP nomination?

Probably not, but I just might be wrong about that – now that’s a truly scary thought.

OK, I can’t resist this one. Given his latest tweet regarding Noah’s Ark, then it should come as some relief to many to appreciate that he clearly does have a plan in mind when it comes to the challenge of dealing with climate change and rising sea levels.

2 thoughts on “Are Christians who come out with daft claims stupid?”