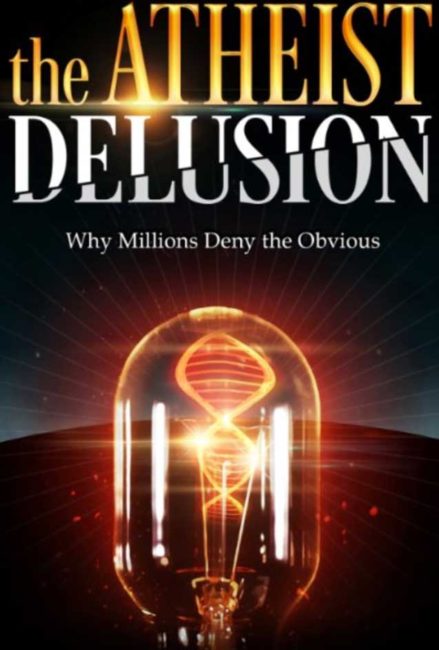 You might perhaps be wondering what this drama is all about. For those in the know it all comes down to that one-man incarnation of religious eccentricity, Mr Ray Comfort. He is also rather famously known to some as “The Banana Man” due to a previous evangelist career highlight where on camera he produced a Banana and claimed it to be proof that God was real because of how naturally well-designed it was for humans. The flaw of course is that the banana as we know it today was artificially selected by humans and does not exist naturally with the attributes he hailed as evidence for a god designing it.

The latest highlight in the Comfort saga is a movie he has produced entitled “The Atheist Delusion”. As part of the promotion for that he claims that it destroys atheism “with one scientific question,”.

So what is really going on here?

To get your head around what is now happening, picture in your mind some weird idea, for example bigfoot or aliens. A believer in one or the other announces, “Hey, I have got solid proof, a UFO just landed on the front lawn of the White House, go take a look”, or “Hey, I have got the body of an actual bigfoot, come take a look“. Since that sounds fascinating, you decide to check it out. However, upon arrival at the White House you discover a cardboard cutouts staked out on the White House lawn, or when checking out the Bigfoot body, you find a manakin dressed up in a bigfoot costume. You then proceed to laugh at it all, and that reaction rather upsets the guy promoting the claim.

Well, that is precisely what is playing out here.

Mr Comfort’s movie is up on IMDB, and it is getting thousands of one star reviews.

He is now having a tantrum in print and claiming, “Hey that’s not fair, you are being mean to me” and is throwing his toys out of the pram. I’m not kidding …

Evangelist Ray Comfort said atheists down-voted his latest movie “The Atheist Delusion” on the film ratings website IMDB after it premiered at the Ark Encounter in Kentucky last Saturday.

… “They are worried that people will watch it and realize the insane nature of atheism,” he continued. “Watch the atheists swarm in like a bunch of nasty bees, to try and pull it down,” Comfort said….

… “This is because atheists resort to character attacks when they have no answer to an argument. They shed other arguments like water off a duck’s back, but ‘The Atheist Delusion’ had ripped the feathers off the duck,” he said.

Actually, if you check the reviews, you will discover that they are telling him that the movie is crap and articulate why, I’ve not seen any attack it because it is just him.

OK, so exactly what have those mean non-believing heretics been saying then?

Here are a couple of quite randomly selected examples …

More “God In The Gaps” Hogwash

Should be called “God In The Gaps: The Movie.” It’s that same old, tired argument we’ve been seeing for over 100 years, “We don’t know the answer, so God must have done it.” There’s no “gotcha” moment, there’s no irrefutable logic, and there is certainly not “one scientific question” that “destroys atheism” as the movie’s tag line would suggest. It’s just more of the same stuff we’ve seen from Roy Comfort: badly edited interviews, pointless questions, and conclusions based on one single book.

If your goal is either laugh at the stupidity of it all, or to whip yourself up into a logical frenzy, by all means see this movie, otherwise avoid it at all costs.

As per usual with Ray Comfort, this piece is rife with straw men, misunderstandings of science, flat out lies about science, and extremely sad logical fallacies. The entire thing could be boiled down to “I don’t get how science works, therefore it must be magic. Specifically, my particular belief on magic.” Never mind that no one rational really believes the “atheists” in the film are actual atheists and actual atheist positions. I’ve never met another atheist who was quite so absurd of a caricature of what Christians WANT atheists to be like! This movie really just serves to preach to the choir- it contains no compelling arguments, no truth, and a heap of lies and maligning of a large and growing segment of the population.

I wonder if he knows the meaning of tautology: repeating the same concept or assertion using different phrasing or terminology, so that the proposition as stated is logically irrefutable, while obscuring the lack of evidence or valid reasoning supporting the stated conclusion.

His assertion that “complexity requires a designer” is a basic fallacious argument. The fact that DNA is the “code book” of life does not imply intent or design. Each step in evolution is an imperceptible change; countless minuscule changes over billions of years add up to the vast range of living things that we know today. Simply saying “God did it” is childish ignorance.

Mr Comfort is an articulate speaker and no doubt impresses the young people be interviews, while putting them under pressure to respond without the time to reflect. I suspect there were others who were not so beguiled. He’s in the privileged position of being able to select the clips to include in his film. That’s called cherry picking.

He should try reading books other than his favourite collection of myths and legends.

A complete waste of time.

There are many many more where those came from.

So contrary to what Mr Comfort is claiming, he is getting lots of one star reviews basically because he set expectations incorrectly. When people roll up to check out his “atheist killer question” and find cardboard cutout myths being asserted as fact and scientific facts being dismissed as myth, he gets lumbered with lots of well-deserved one star negative review.

Has even one person turned up, viewed it, and then emerged to proclaim, “Hey, that’s a great argument, it convinced me and changed my mind”?

Nope, and there is a reason for that.

What was perhaps one of the worst movies ever made is Ed Wood’s 1959 “Plan 9 From Outer Space“, and it now apparently has some serious competition for that title.

You can of course make up your own mind

Mr Comfort’s full movie is available for free on YouTube, hence it can be argued is worth every single penny you spend to watch. In reality, the comment thread under it is perhaps far more interesting. What might also be of interest is that back last July the Friendly Atheist did a full step by step review.

So does the movie actually destroy atheism “with one scientific question,”?