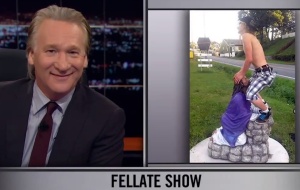 The Demand for perfection

I confess that I do love much of what Bill Maher says.

Do I agree with every single word that comes out of his mouth?

Nope, I hold no illusions that he is infallible, and while there is a great deal that he says that I do wholly agree with, there are still a few things that he has said that I do go along with. For example he is known to have taken an Anti-Vaccine stance and in response to that the medical and skeptic communities have called his remarks about health and medicine unscientific and even harmful.

Maher did respond to the criticism, saying …

“What I’ve read about what they think I’m saying is not what I’ve said. I’m not a germ theory denier. I believe vaccinations can work. Polio is a good example. Do I think in certain situations that inoculating Third World children against malaria or diphtheria, or whatever, is right? Of course. In a situation like that, the benefits outweigh costs. But to me living in Los Angeles? To get a flu shot? No.”

… except that what he actually said was …

“Why would you let them be the ones to stick a disease into your arm? I would never get a swine flu vaccine or any vaccine. I don’t trust the government, especially with my health.” – October 9, 2009 show

… and while that is his own choice, it is also not factually true that he is sticking a disease into his arm. Vaccines work, and if parents are persuaded that not getting their kids vaccinated is a good thing, then there are consequences … people die.

Reading between the lines

Now if you are reading between the lines here, then you have probably guessed that I’m not actually taking about Bill Maher, but am instead tackling a rather larger topic. There have recently been some quite vocal criticism of a few well-known individuals, and no I’m not being specific because I have no desire to get drawn into the utterly absurd debates, life is too short, but will instead stick to my generic observation.

If somebody famous says something you disagree with, then sure call them out on it, but don’t start sticking inappropriate labels on them, demonise them, and in effect brush all the good things they have ever said or done to one side. You might find it hard to come to terms with this but they are still on your team.

Bill Maher might indeed have taken an anti-vax stance, and has since them perhaps changed his mind on that (I’ve not heard him say anything similar recently), but even if he was still a tad ga-ga when it comes to vaccines, then I would criticise the anti-vax stance, and at the same time I’d also still love the guy for everything else he says and does.