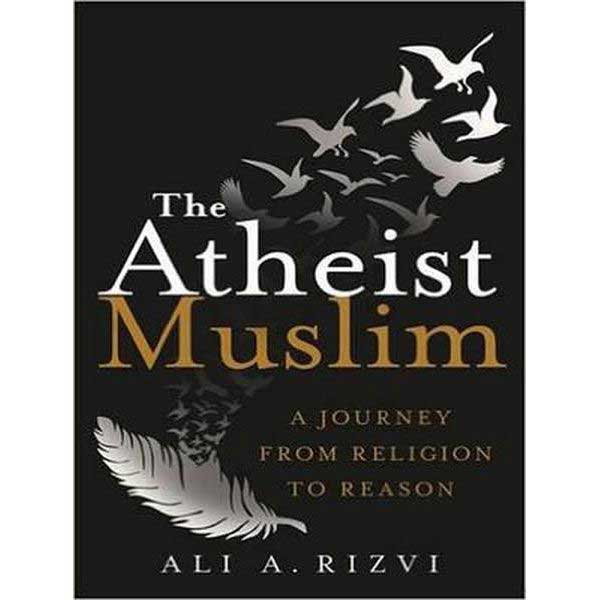 There is a really good article within The Atlantic that focuses on Ali Rizvi, a chap that I have been friends with on facebook for quite some time, enough to know that he is a good author, a passionate medical doctor, a great blogger and an inspirational individual. What is of specific interest within the article is that he is also an ex-Muslim and has written about how he came to that specific position in a recently published book entitled “The Atheist Muslim: A Journey from Religion to Reason“.

The Article : “The Dilemma Facing Ex-Muslims in Trump’s America“

The dilemma is of course to wonder how to both defend Muslims and yet at the same time criticise Islam. The article digs into this precise issue by focusing on Ali because his recently published book also contains a great deal of empathy and so it manages to successfully square that apparent circle.

The key to understanding how is the opening lines  …

“Challenging Islam as a doctrine,” Ali Rizvi told me, “is very different from demonizing Muslim people.”

… “Human beings have rights and are entitled to respect. Ideas, books, and beliefs don’t, and aren’t.”

The challenge for our age is that within many minds, criticism of the deeds of radicals by ex-muslims has led to specific things

… on the left, self-critique of Islam is often castigated as critique of Muslims

… on the right, the very same self-critique of Islam is used to attack Muslims and legitimize draconian policies against them.

Sending a message that enables people to break free from all that is what makes Ali’s book rather important. He also speaks from a vast pool of personal experience …

Rizvi told me he wrote his book to give other ex-Muslims and wavering Muslims a reference point. He particularly had in mind those atheists, agnostics, and humanists who live in Muslim-majority countries where the act of renouncing one’s faith is punishable by death. Rizvi, who was born in 1975 in Pakistan, where blasphemy carries a potential death sentence, and who lived for more than a decade in Saudi Arabia prior to becoming a permanent resident in Canada in 1999, knows all too well how dangerous public declarations of disbelief can be.

As an ex-Muslim some might anticipate hostility and anger directed towards all things Islamic, but this is simply not the case at all …

He writes about Muslims with great humanity and feeling. He also remains culturally wedded to Islam, celebrating Eid and enjoying the feasts of Ramadan.

Ideas do not have rights

“Most Muslims are moderate, but whoever wrote the Quran, that’s not a moderate person,” he said. Rizvi devotes an entire chapter of his book to exposing what he sees as the flagrantly illiberal elements in Quranic scripture. Referring to the chapter on women, Surah An-Nisa, he writes: “It establishes a hierarchy of authority, where men are deemed to be ‘in charge’ of women. It also asks wives to be obedient to their husbands, and allows their husbands—in the most controversial part of the verse—to beat them if they fear disobedience.”

When people become conscious of this then often some leap to a false conclusion that all Muslims are obviously vile horrible people, and that also becomes justification for open hostility and actual discrimination.

These same people also generally tend to revere the Bible as their guiding moral framework, and remain completely oblivious to the observation that it not only takes a very similar stance, but is in reality even worse. For example the bible contains guidance on whom you may enslave and how you should correctly beat your slave. (Apparently it is all just fine as long as your slave survives the beating Exodus 21:20-21).

Most who do embrace the bible do also happily and quite rightly discard the idea that slavery is a good idea, yet fail to appreciate that the vast majority of Muslims are moderates and do exactly the same when it comes to such things within the Qu’ran.

Who is the book for?

It is not actually a book that can be picked up by an Islamic Fundamentalist, but rather is a book that addresses those that wish to silence and gag ex-muslims from speaking out critically about bad ideas that then inspire abhorrent atrocities.

Silence is not an option

Recalling Osama bin Laden’s admiration for Noam Chomsky’s writings, he said, “Bin Laden was a huge fan of Chomsky, had his books, and quoted him in a few of his speeches. So should Chomsky stop speaking truthfully about the problems of U.S. foreign policy because Americans may get attacked around the world? Well, of course not. If something is true and needs to be said, it needs to be said.”

The key message is this

Writing within his book, Ali spells it out boldly …

Once this might have been a subtle distinction of interest to human rights advocates and apologists, but no longer. We now live in an age where literally millions are supporting a president who is enacting national and foreign policy that is founded upon a complete lack of any  understanding of the above.

The Book: “The Atheist Muslim: A Journey from Religion to Reason“

Ali has poured his heart into the book, and so has reaped high praise from many. Yes this bit is a book plug, and no, I have no financial interest here. It is possible to be an Amazon Associate and earn a few cents via promoted links, but no, this is not that. Instead, I’m recommending a well-written insightful book that you just might find interesting. I’m not alone in that recommendation, others agree, and so here are a few reviews to help temp you a bit into considering picking up a copy …

“[Rizvi] approaches his subject with the kind of scientist’s rationality that ushered in the Age of Reason, yet he does so also with a passion for humanity that is inspiring. . . His open personality and earnestness make this book so compelling that Rizvi may well become the Dawkins or Hitchens for the millennial generation.” ―New York Times Book Review

“Rizvi brings nuance to understanding the connections among religion, frustration, and violence for young Muslims….By demanding a space for questioning Islam openly that does not devolve into attacking individual Muslims, the work pushes towards the possibility of a cultural Islam that maintains family and ethnic traditions without requiring belief.” ―Publisher’s Weekly

“Do you worry about Islam in the world today? If so, you must read The Atheist Muslim. Ironically, atheist Muslims like Ali A. Rizvi are the saving grace of Islam. Atheist Muslims, like Ali, give us hope for a pathway in which we, as Muslim reformers, can save Islam from the Muslims burying the religion in a heap of medieval, sexist and intolerant interpretations. The Atheist Muslim offers all of us a vitally important road map for critical thinking about Islam―and, yes, hope.” ―Asra Q. Nomani, cofounder of the Muslim Reform Movement and author of Standing Alone: An American Woman’s Struggle for the Soul of Islam

“Ali Rizvi’s Atheist Muslim is an intelligent, heartfelt, and honest examination of a pressing issue in the world today. A humanistic, ecumenical, and secularized version of Islam will be among the most important movements of the 21st century, and Rizvi’s book is an invaluable guide to the challenges and opportunities in advancing it.” ―Steven Pinker, Johnstone Professor of Psychology, Harvard University, and author of The Better Angels of Our Nature.

“One man’s epic struggle to climb out of the pit of dogmatic religion into the sunshine of enlightenment. And because the religion concerned was Islam, his success story is the more important for our troubled times. In this beautifully written page turner, Ali Rizvi shows us what it is personally like to be trapped in Islam, and we admire him the more for the courage of his escape.” ―Richard Dawkins, author of The God Delusion

“Ali’s message is one which any of us who want true understanding and coexistence should hear. Separating belief from tradition is the key to us respecting other people and cultures while not ignoring our intellect to do so.” ―Dave Rubin, Host of The Rubin Report

“I have heard it said by my fellow liberals and Muslim co-religionists that atheists have no role in the debate around Islam’s future. They have left God’s tribe, so why should anyone listen to what they have to say. This is nothing but a form of bigotry and victim-blaming disguised as multiculturalism and ‘respect’. The day we Muslims leave ex-Muslims alone, and the day over twenty Muslim-majority countries around the world decriminalise apostasy and blasphemy, is the day we can expect them to leave Islam alone. Let there be no doubt: overwhelmingly, we Muslims are their oppressors. They – the minority within the minority – are our victims. Ali A. Rizvi’s book The Atheist Muslim is a timely and much needed contribution to the ongoing debate around contemporary Islam’s struggle to come to terms with modern liberalism, secularism, and freedom of as well as from religion.” ―Maajid Nawaz, author of Radical

“Ali A. Rizvi has written a book which is a much-need discourse for the Muslim world today as Muslims struggle globally with issues of radicalization and modernity. Rizvi has documented his personal journey with reason and logic, offering empathy for those following a different path. His book is less about atheism and more about the issues facing Muslims and the urgent need for critical thinking and reflection. Rizvi’s honesty and integrity has to be appreciated as he does not indulge in political correctness. As a believer I recommend this book be read at least once.” ―Raheel Raza, President of The Council for Muslims Facing Tomorrow and author of Their Jihad…Not my Jihad!

“In this timely and important book, Ali Rizvi deftly weaves together two narratives: the abandonment of his Muslim faith, and a critique of those doctrines of Islam that create terrorism and oppression. It turns out that these are connected, for the very reasons Rizvi became an apostate are the reasons why it’s no longer possible to see Islam as a “religion of peace.” ––Jerry Coyne, Professor Emeritus, University of Chicago, author of Faith Versus Fact and the New York Times bestseller Why Evolution is True

“Ali A. Rizvi has long been a rare voice of reason and moral clarity on the topic of Islam. Finally, he has written a book―and it was worth the wait. One of the greatest challenges of our time is to inspire a secular Enlightenment throughout the Muslim community. But the obscurantism practiced by so many ‘moderate’ Muslims, along with the hypocrisy of their liberal apologists, has made this project immensely more difficult. If you want to understand why so many free, educated people continue to lie supine before the threat of Islamist theocracy, read The Atheist Muslim.” ―Sam Harris, author of the New York Times bestsellers The End of Faith, The Moral Landscape, and Waking Up.