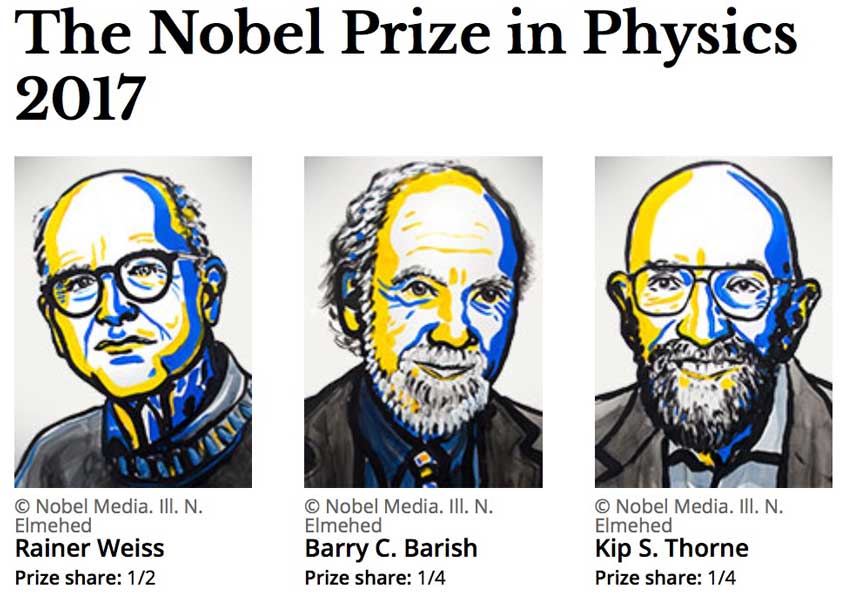 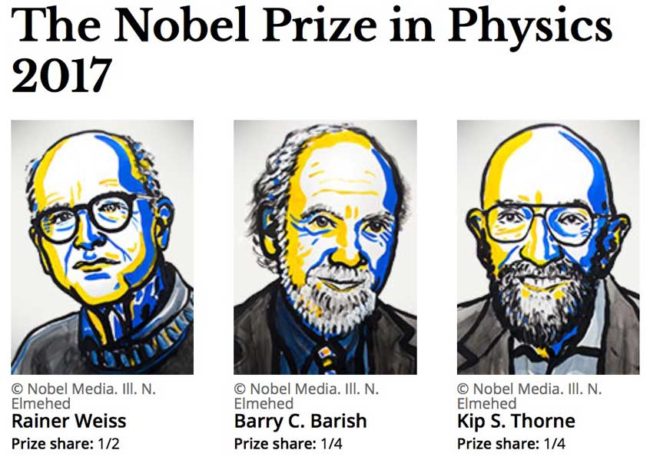 It is well deserved. I remember the excitement and rumours that were swirling about prior to the formal LIGO announcement, and was even blogging about LIGO back in Jan 2016. So the award of a Nobel Prize is indeed a reflection of the excitement that prevailed.

The Nobel Prize for Physics is perhaps to some extent the highlight of the annual Nobel awards. You might perhaps suggest that I’m being a tad biased, and perhaps I am, but if you look at a list of past winners then, as a contrast to any other Nobel prize category, the names are all well-known even outside the physics community – Albert Einstein, Niels Bohr, Marie Curie, Erwin Schrödinger, Werner Heisenberg, Max Planck, Guglielmo Marconi, Richard Phillips Feynman, and many more.

OK, enough preamble, let’s move on to some details.

(Side note: the information below has been shamelessly cut and pasted from the official press release)

On 14 September 2015, the universe’s gravitational waves were observed for the very first time. The waves, which were predicted by Albert Einstein a hundred years ago, came from a collision between two black holes. It took 1.3 billion years for the waves to arrive at the LIGO detector in the USA.

The signal was extremely weak when it reached Earth, but is already promising a revolution in astrophysics. Gravitational waves are an entirely new way of observing the most violent events in space and testing the limits of our knowledge.

LIGO, the Laser Interferometer Gravitational-Wave Observatory, is a collaborative project with over one thousand researchers from more than twenty countries. Together, they have realised a vision that is almost fifty years old. The 2017 Nobel Laureates have, with their enthusiasm and determination, each been invaluable to the success of LIGO. Pioneers Rainer Weiss and Kip S. Thorne, together with Barry C. Barish, the scientist and leader who brought the project to completion, ensured that four decades of effort led to gravitational waves finally being observed.

In the mid-1970s, Rainer Weiss had already analysed possible sources of background noise that would disturb measurements, and had also designed a detector, a laser-based interferometer, which would overcome this noise. Early on, both Kip Thorne and Rainer Weiss were firmly convinced that gravitational waves could be detected and bring about a revolution in our knowledge of the universe.

Gravitational waves spread at the speed of light, filling the universe, as Albert Einstein described in his general theory of relativity. They are always created when a mass accelerates, like when an ice-skater pirouettes or a pair of black holes rotate around each other. Einstein was convinced it would never be possible to measure them. The LIGO project’s achievement was using a pair of gigantic laser interferometers to measure a change thousands of times smaller than an atomic nucleus, as the gravitational wave passed the Earth.

So far all sorts of electromagnetic radiation and particles, such as cosmic rays or neutrinos, have been used to explore the universe. However, gravitational waves are direct testimony to disruptions in spacetime itself. This is something completely new and different, opening up unseen worlds. A wealth of discoveries awaits those who succeed in capturing the waves and interpreting their message. 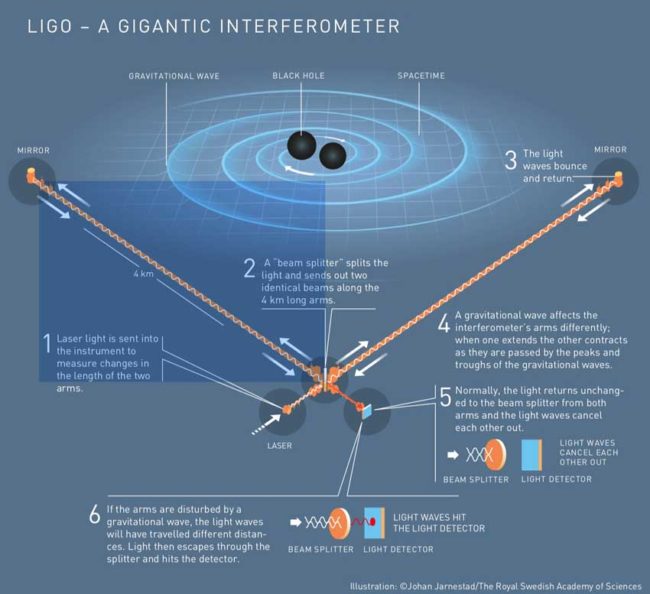