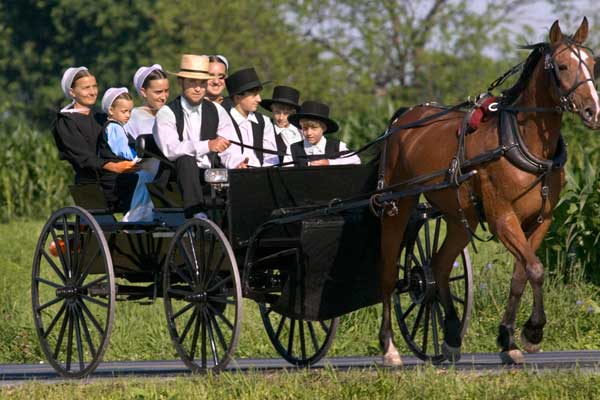 Living a rather isolated lifestyle from the rest of us are the Amish community.  They are a religious group generally located in Pennsylvania as a result of an 18th century migration, and numbers at roughly 220,000 individuals.

Another important factor not specifically examined in the study is the fact that the Amish grow and raise all their own food. They employ time-tested, organic methods that provide them with healthy fruits, vegetables, milk, meat, and other untainted foods that most Americans never get. Rich in living enzymes, vitamins, and nutrients Amish food is grown and raised the way it should be, resulting in improved health.

While some may ridicule their secluded lifestyle, the Amish commitment to simple, productive lives and clean, local food is benefiting their health in ways that the rest of America can only dream about. When compared to a life of sitting in office buildings all day, eating processed and genetically-modified junk food, and popping prescription medications, it becomes clear which lifestyle is truly deserving of contempt.

OK, so there are a couple of things to pull out here, but first one rather important and key point is that if Natural News is advocating it, then you can be quite certain that it is wrong, or as Dr David Gorski puts it, Natural News is …

“one of the most wretched hives of scum and quackery on the Internet,” … “blatant purveyor of the worst kind of quackery and paranoid anti-physician and anti-medicine conspiracy theories anywhere on the Internet”

He wrote that eight years ago, and yet today that is still a wholly accurate fact based description.

Anyway, let’s go back to their latest claims regarding the Amish. The ever so tiny flaw regarding the claim is that is is demonstrably false.

Once again, nope, they very much do use GMOs and have been doing so for quite some time. When challenged about this conflicting with their religious belief, one Amish farmer commented … “Amish law doesn’t say anything about growing genetically modified tobacco,”, and to drive that point home, here is a BBC clip of an Amish farmer talking about his GMO crops.

What is true is that the cancer rates amongst the Amish are lower than the general population, but that has nothing to do with them being Organic (they are not), and not using GMOs (they very much do), but rather because of the far more blatantly obvious explanation … because of their religious beliefs, they don’t drink, they don’t smoke, and they generally work in physically demanding jobs (farming or construction) that keeps them very active.

Incidentally, another similar variation of the Appeal-to-Amish fallacy by quacks is that the Amish don’t vaccinate and don’t have autism, therefore that proves that vaccines cause autism. I covered this myth in a recent previous posting last month …

Is it true that the Amish don’t vaccinate and don’t see autism?

This is well covered in many places, for example in a PLOS blog here, or within the Paediatrics journal article here “Underimmunization in Ohio’s Amish: Parental Fears Are a Greater Obstacle Than Access to Care” where they verified …

In other words, the claim that they don’t have any vaccines is pure urban folklore. What makes it truly odd to find this myth being propagated is that it has an entire Wikipedia page that very robustly debunks it all. There they clearly lay out where the myth came from, and also lay out the evidence that clearly confirms it to simply not be true, and yet it still persists and thrives.

OK, so even if they do actually have vaccines, it is still interesting to think about why Autism is so low within the Amish community. To understand that you would need to appreciate that Autism appears to have a specific genetic/epigenetic correlation, and so within a closed gene pool such as the Amish then we should not expect to find it to the same degree as we would within the general population and that is exactly what we do see. This rather ironically is further evidence that confirms it to be genetic/epigenetic and not caused by vaccines which 85% of their community do accept, so shall we now go with beards preventing Autism, because they have a lot of beards – and yes, this Amish “evidence” for the “vaccines cause autism” claim is really that silly.

If curious, then yes Natural News have indeed also promoted this variation of the vaccine myth as fact.

As for Mike Adams, the guy behind Natural News, I did find this additional quote that sums it all up …

I still don’t know whether Adams really and truly believes in the nonsense he promotes. I really don’t and still can’t tell. For example, did Adams relocate to Ecuador because he really believes in the “natural” lifestyle or did he do it to escape those pesky laws in the U.S. that frown on selling unproven remedies.