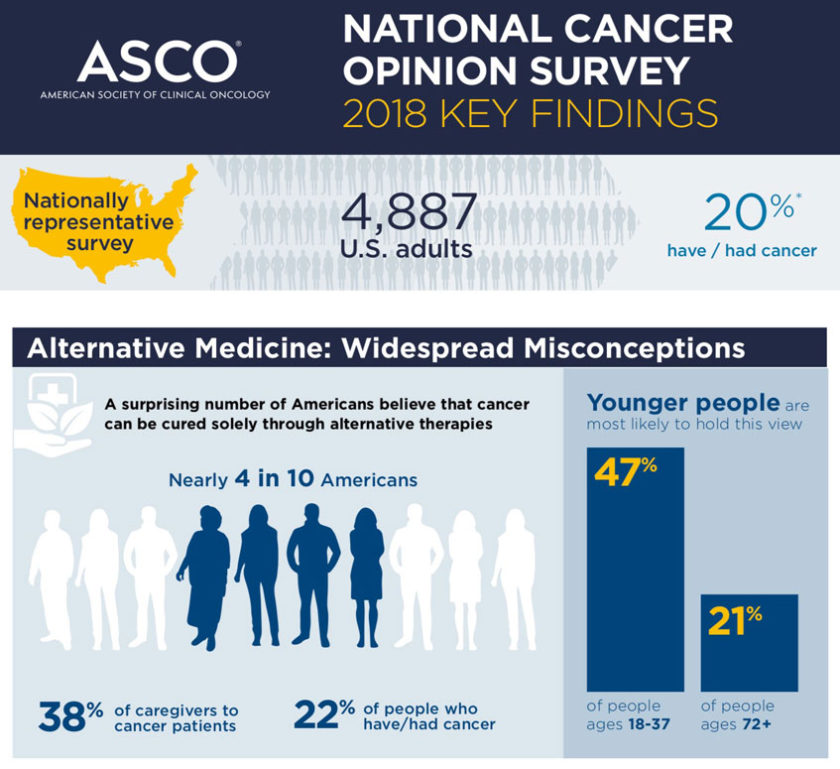 In the US the American Society of Clinical Oncology (ASCO) has conducted their second Cancer poll and has just released the results.

Side note: The word Oncology is a branch of medicine that deals with the prevention, diagnosis, and treatment of cancer. In other words, ASCO are the subject matter experts. They have a keen interest in understanding public perceptions on the topic so that they can take appropriate action to address the issues uncovered.

Nearly four in 10 Americans believe the big C can be cured solely through alternative therapies.

If you research what actually happens then the truth is that if you use alternative therapies instead of standard treatments you have much higher probability of death. But don’t take my word on that, here is the BMJ telling you this. 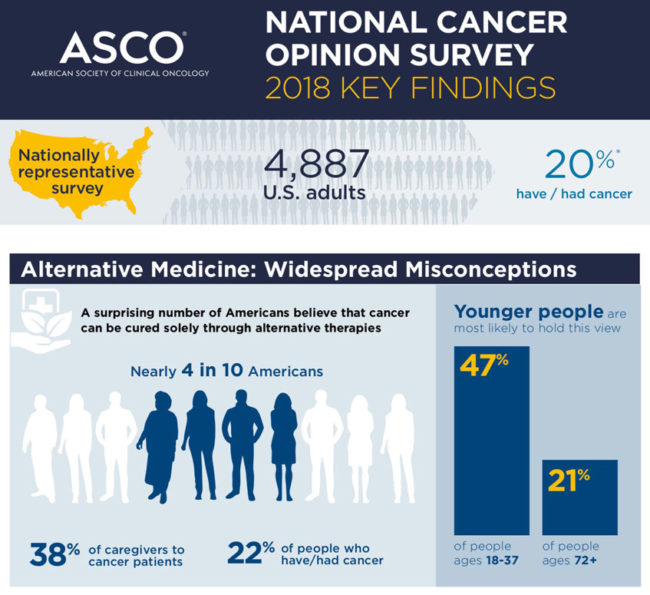 Beyond the BMJ there is also a recent study published in the Journal of the National Cancer Institute. There they reviewed patients who chose to treat using only alternative medicine and found that they had a 2.5 times higher mortality rate than patients who received standard treatments such as surgery, radiation, chemotherapy, immunotherapy, and hormone-based therapies.

Even many of those with direct experience – people who have or had cancer and family caregivers – believe it can be cured solely through alternative medicine (22% and 38% respectively). The survey also found that younger people – 47% of people ages 18-37 and 44% of people ages 38-53 – are the most likely to hold these views.

“There’s no question that evidence-based cancer therapy is necessary to effectively treat the disease,” said ASCO Chief Medical Officer Richard L. Schilsky, MD, FACP, FASCO. “The vast majority of alternative therapies either haven’t been rigorously studied or haven’t been found to benefit patients. When patients are making critical decisions about which cancer treatments to undergo, it is always best to follow the evidence from well-designed research studies.”

Action Item: They need to correct the widespread misinformation.

Amid the ongoing opioid crisis, nearly three in four Americans are concerned about limiting access to opioids for people with cancer – many patients report difficulty obtaining these medications.

Most Americans believe that cancer patients should not have their access to opioids curtailed amid efforts to curb the opioid epidemic: 73% say any new rules and regulations that make prescription opioids harder to obtain should not apply to cancer patients.

Yet, the survey shows that accessing opioids for pain is already difficult for many people with cancer. In a small sample, 40% of patients who have used opioids in the past 12 months to manage pain or other symptoms have had trouble accessing them.

“People with cancer frequently experience severe pain, and many of them require opioids to treat it,” said Dr. Bertagnolli. “Americans seem to recognize that cancer patients’ access to needed pain medication should not be restricted, even as our country grapples with how to tackle the opioid crisis.”

According to the survey, the vast majority of Americans (83%) support the use of medical marijuana among people with cancer. However, 48% of a small sample of patients who have used medical marijuana in the past 12 months say they have had difficulty obtaining it.* In addition, 58% of people who have or had cancer say they wish more information were available about the benefits of medical marijuana for symptom relief.

Action Item: They need to ensure patients have access to the pain medication they need

Discovery 3 – Diagnosis brings a Huge worry about the Financial Impact

Those polled said that they are just as worried about the financial impact of a cancer diagnosis as they are about dying of cancer, with caregivers and rural Americans bearing the weight of the financial and access challenges. 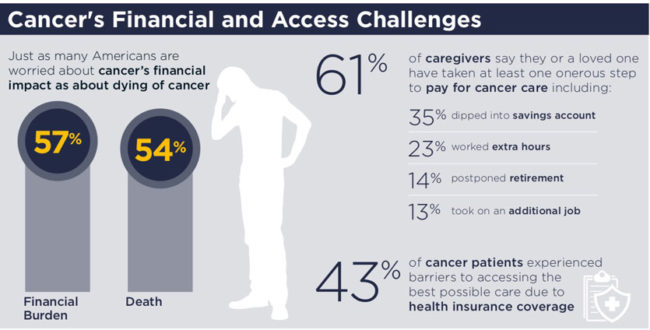 Even more than patients, family caregivers bear the brunt of the high cost of treatment:

“Patients are right to be concerned about the financial impact of a cancer diagnosis on their families. It’s clear that high treatment costs are taking a serious toll not only on patients, but also on the people who care for them,” said Dr. Schilsky. “If a family member has been diagnosed with cancer, the sole focus should be helping them get well. Instead, Americans are worrying about affording treatment, and in many cases, they’re making serious personal sacrifices to help pay for their loved ones’ care.”

Rural Americans are the most likely to be concerned about the availability of care near where they live:

“The unfortunate reality is that rural Americans routinely have to travel long distances for cancer care, which can lead to dangerous delays in their diagnosis and treatment,” said Dr. Bertagnolli. “As a result, rural counties have higher death rates from many common cancers than urban areas. Our healthcare system needs to address these disparities so that every patient, no matter where they live, can access high-quality cancer care.”

Action Item: They need to alleviate the financial distress both patients and their loved ones experience too frequently.

ASCO represents nearly 45,000 oncology professionals who care for people living with cancer. By gaining an understanding of the challenges and then striving to address them, they can make a difference in a situation that is quite literally life or death.

If you get cancer and you happen to believe that quackery will cure you, then gaining an understanding that such a course of action would increase your probability of death by 2.5 times could potentially motivate you to make a better decision with a far better outcome.

Other insights include these …

Your action item is to vote for those that will make the above happen. Hint: the GOP might claim it is them, but their actual track record reveals that it will not be them.

You can find the full results of the Survey here. (Sanity warning, it is 82 pages)