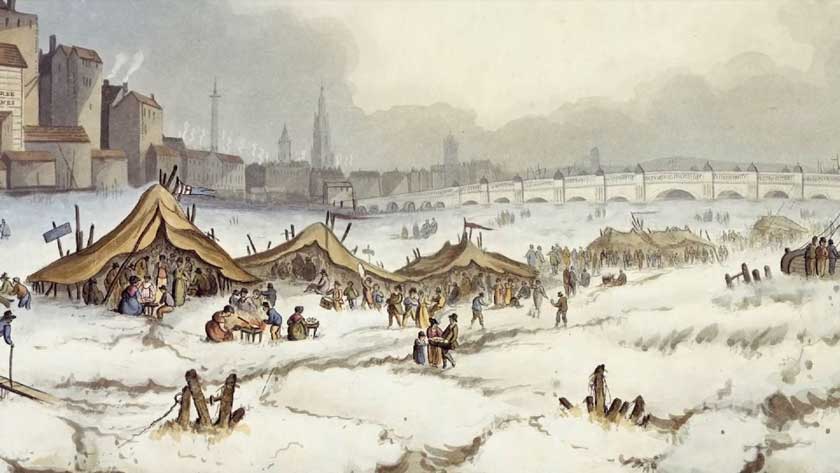 Sky News is reporting the following, so it just must be true, they would not get something like this incorrect and would of course fact check … right?

A model of the Sun’s magnetic activity suggests the River Thames may freeze over within two decades, experts say.

A mathematical model of the Sun’s magnetic activity suggests temperatures could start dropping here from 2021, with the potential for winter skating on the River Thames by 2030.

A team led by maths professor Valentina Zharkova at Northumbria University built on work from Moscow to predict the movements of two magnetic waves produced by the Sun.

Professor Zharkova claims 97% accuracy for the model which dovetails with previous mini ice ages, including the Maunder Minimum period from 1645 to 1715 when frost fairs were held on the frozen Thames.

They interviewed a scientist, so it must be really really true … right?

Least you wonder, all the other usual suspects are running with in, and that includes the tabloids such as the Mirror, the Sun, and the Daily Mail.

So is it really true?

If anybody at any of these news outlets, and I mean literally anybody including the guy who washes the windows, had bothered to take about 30 seconds to google this, it would have revealed that it is all nonsense and that there will not be a mini Ice Age.

Like a game of whack-a-mole this popped up two years ago and was debunked then – same scientist and exact same claim – and so I can only conclude that these news outlets think we all suffer from alzheimer’s.

Phil Plait, an astronomer, wrote an article back in 2015 debunking all this …

This new claim comes from a presentation at a conference by Valentina Zharkova, a mathematician and scientist at Northumbria University. To be clear, she’s not predicting a 60 percent drop in the light and heat emitted by the Sun, but a drop in magnetic activity in the Sun. This has only a marginal effect on the Sun’s light/heat output. Also, if you listen to an interview with her on Radio New Zealand, you’ll hear some unusual claims, like the climates on other planets are changing due to the Sun—a red herring when it comes to climate change on Earth. She also admits at the end she doesn’t do atmospheric research, so the claim that lowered magnetic activity of the Sun can cause an ice age here on Earth is in my opinion shaky at best.

The funny thing is, I debunked this Sun-influenced cooling idea back in 2011!

The fact that it is the exact same claim is actually quite handy, all he needs to do is point back to that 2015 article …

Not to put too fine a point on it, but this is utter nonsense. And we knew it was nonsense back in 2015 when the claim first came out. Here’s why: https://t.co/bcuwLmROLW https://t.co/USKXFv5aGj

Even snopes has a rebuttal from 2015.  They in turn reference a Washington Post article that lays out in great detail how this was all simply a misunderstanding by the media back in 2015.

Unlike the “journalists” at Sky News and the various UK based tabloids, Sara Kaplan at the Washington Post actually did some research.

Increased magnetism will not lead to a mini ice-age …

Though University of Northumbria mathematics professor Valentina Zharkova, who led the sunspot research, did find that the magnetic waves that produce sunspots (which are associated with high levels of solar activity) are expected to counteract one another in an unusual way in the coming years, the press release about her research mentions nothing about how that will affect the Earth’s climate. Zharkova never even used the phrase “mini ice age.” Meanwhile, several other recent studies of a possible solar minimum have concluded that whatever climate effects the phenomenon may have will be dwarfed by the warming caused by greenhouse gas emissions.

The previous Mini-Ice age was localised and not global …

that “Little Ice Age” that occurred during the Maunder minimum, it wasn’t so much a global ice age as a cold spell in Europe, and it may have been caused more by clouds of ash from volcanic eruptions than by fluctuations in solar activity.

This work by Valentina Zharkova has not been peer-reviewed. Well, back in 2015 that was true, it might no longer be true, but so far I’ve not found any papers on this within a reputable peer-review journal.

As for that image of Londoners frolicking at “frost fairs” on the frozen-over Thames? Those had less to do with the activity of the sun than the activities of humans. Historical climatologist George Adamson told the BBC last year that the river used to freeze because of the architecture of the old London Bridge, whose arches prevented salty sea water from passing upriver and lowering its freezing point. The construction of a new bridge in the 19th century, and other landscape changes that made the river flow faster, brought an end to those festivals — less so than the end of the Maunder minimum.

If it sounds extraordinary and your source is the Daily Mail, The Sun, the Mirror, or Sky News, then it is probably not true.

Doubt is your friend.