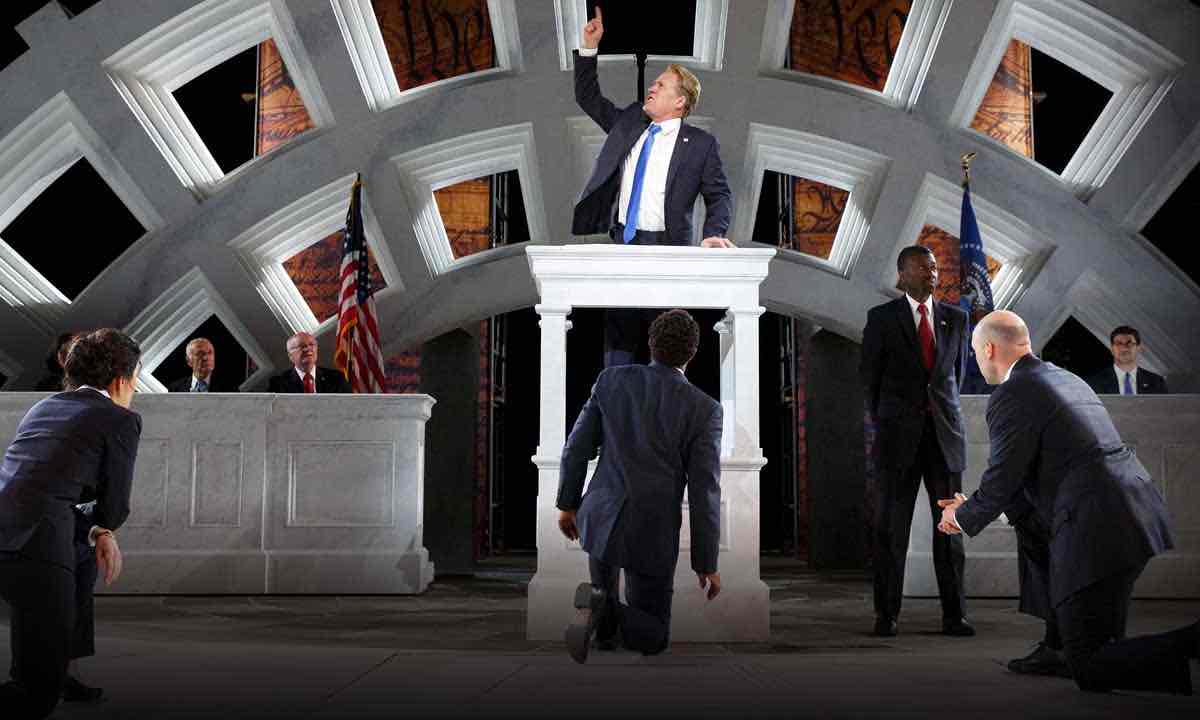 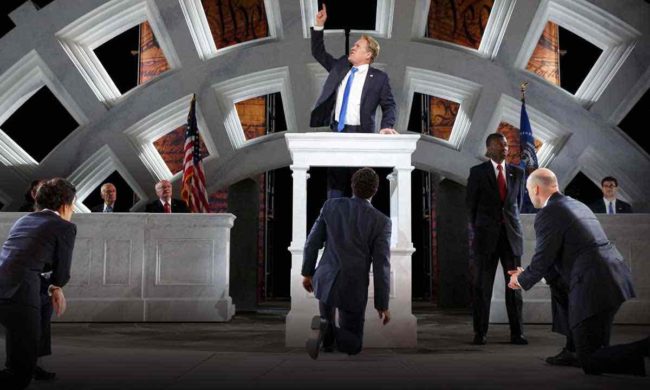 Shakespeare in the Park is a long tradition in New York and so this year they put on a production of Julius Caesar. To connect with the audience they made it relevant by dressing up in modern clothes and having a Julius Caesar character that was rather familiar.

Lois Beckett writing in the Guardian describes how the audience reacted. If you remember the play then you know what happens to Caesar ..

When a blond Julius Caesar bounded on stage this weekend with a red tie and a svelte wife with a Slovenian accent, the New York audience laughed.

They laughed at Caesar’s punchy rhetoric and big hand gestures and susceptibility to flattery. They giggled at Calpurnia’s mincing gait and slinky, Melania-inspired wardrobe, and at Octavius Caesar, a Jared Kushner-like nerd wearing a bulletproof vest over his blue blazer.

They shouted with glee when one of Caesar’s opponents declared, exasperated, that ordinary Romans loved him so much they would forgive him “if Caesar had stabbed their mothers on Fifth Avenue”.

But when Caesar’s enemies took out their knives and killed the Trump-like leader on the senate floor, no one was laughing.

For a moment, there was absolute silence in the outdoor theater of nearly 2,000 people. The conspirators onstage themselves seemed overcome. One of the assassins tried to shout a triumphant slogan, “Liberty!” or “Justice!”, but the words came out flat, drained of any meaning. Blood was on Caesar’s shirt, knife gashes in his blazer, blood pooling on the floor.

All the rhetoric about Caesar’s ambition, the danger he had posed to the republic, suddenly seemed worthless. There was only the horror of violence, the shock of it, even to the men and women who had plotted it and carried it out.

As you might imagine, the Trump support camp have gone insane over this, a step that perhaps required very little movement given that they are all quite frankly nuts anyway.

What is the Play Actually about?

The thing that appears to have completely eluded the protesting Trump supporters is that Shakespeare’s Julius Caesar is not a pro-violence pro-assassination play. Read the text and you make a few interesting discoveries …

To drive that point home, here are a few quotes that might be familiar …

“The fault, dear Brutus, is not in our stars, But in ourselves”

“The evil that men do lives after them; The good is oft interred with their bones”

Not just the play itself, but the reaction to this play by Trump supporters is indeed all about good people doing utterly stupid things.

“What’s kind of amusing, in a slightly grim way, about this is to have Julius Caesar of all things suddenly the point at which the right can no longer endure free expression, which they’ve been hollering for … Every time they send out a crazy provocateur on campus, they go bonkers if there are protests.” – Stephen Greenblatt, a leading Shakespeare scholar at Harvard University

“Our production of Julius Caesar in no way advocates violence towards anyone, Shakespeare’s play, and our production, make the opposite point: those who attempt to defend democracy by undemocratic means pay a terrible price and destroy the very thing they are fighting to save.” – a Public Theater spokeswoman

Shakespeare's apparently a threat to @realDonaldTrump. So, top quotes:
“What a terrible era in which idiots govern the blind” Julius Caesar

Dear Trump Supporters: Stop calling for boycotts of "this playwright behind Julius Caesar." He's rather dead. For the last 400 years.

wish this was an Onion article, but Trump's backers are sending violent hate mail 2 anyone who performs Shakespearehttps://t.co/z9ovg09Y83

2016: fuck your feelings, Snowflake
2017: I found the latest Shakespeare in the park production quite untoward. I require a fainting couch

The year is 2017. Shakespeare is banned from American theaters to appease a growing mob of ignorance. https://t.co/WsA5181yPM

I hope this Shakespeare guy is enjoying his fifteen minutes of fame.

Shakespeare in the Park – latest report on Caesar pic.twitter.com/T3VF0qfgIQ