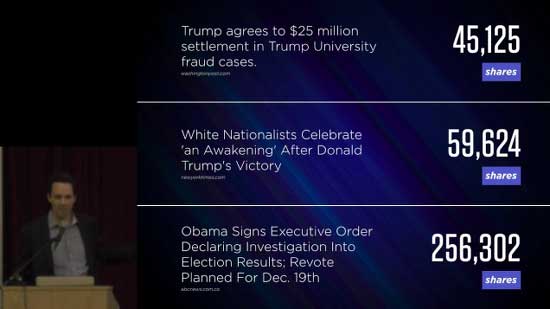 Hemant Mehta, the Friendly Atheist blogger who used to be a maths teacher, plucks out a gem regarding fake news going viral from a presentation by blogger Dan Meyer.

Dan’s keynote presentation is mostly a talk by a maths teachers to other teachers, hence Hemant’s interest. Be warned, unless you are into teaching, it will mostly be of no interest at all.

The bit of interest starts at the 36:43 mark, so just skip to that … and you will be rewarded.

Mr Meyer’s point is this. He lists out three news stories, and the one that was shared the most is rather obviously fake. In fact it screams out in so many ways, “I’m a fake news story”, that you wonder how so many could be so utterly stupid. Dan goes through each of the rather obviously glaring signs that it is fake.

If you never imagined that people could be that stupid, then this past election cycle has seen rather a lot of people quite determined to give a practical demonstration that you would be quite wrong about that.

The context is that Dan is really making a teaching point, and is mulling over “How can we enable people to work out fact from fiction?”

So that is itself a rather important question and is one we all potentially face when discussion anything and everything such as climate change, 9/11, alternative medicine, etc…

The issue is not, and has never been, “Does my evidence Trump your evidence?”, but rather is really about encouraging people to think more critically.

A Fake News poll was run by IPSOS for BuzzFeed, and the results were released a couple of days ago.

Sanity warning, this poll was not a scientific study. Instead it was just an opinion poll, so please take the metrics with a pinch of salt. It is perhaps akin to sticking your finger in the air to see which way the wind is blowing.

First, let’s ask ourselves if Ipsos, the polling company, is a reputable polling organisation?

Do they have data available that backs up the published conclusions of the poll?

Again, yes they do.

So what exactly did they do?

BuzzFeed has an article that not only lays out the poll results, but also explains how they got those results, and provides links to all the data.

They explain the poll itself as follows …

respondents were shown a random selection of six headlines — three true and three false — related to the election. Those six were drawn from a list of 11 headlines gathered largely from a BuzzFeed News analysis that compared the top-performing fake election news articles on Facebook to the the top-performing real election news articles on Facebook. Of the 11 headlines tested, five were false and six were true.

And the results … especially for the 5 fake stories?

Don’t hold your breath on this one, not only is it not at all encouraging in any way, but you can also most probably guess. Here are the reported percentages for the fake news stories. Rather a lot of people rated them to be accurate. For context, the poll was conducted long after the election between Nov 28th and Dec 1st. 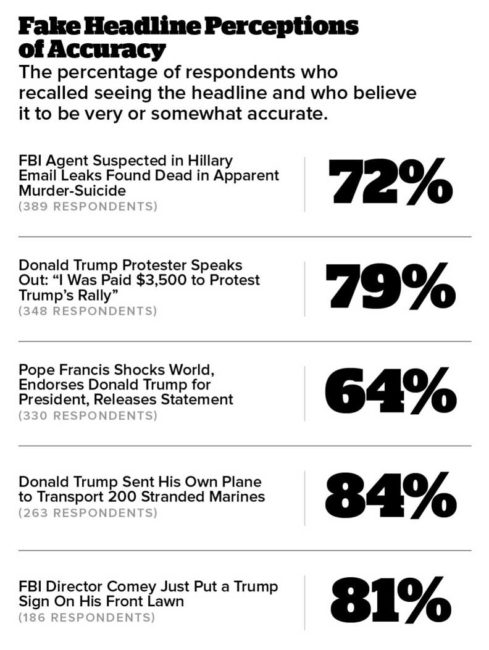 Yes, all of the above really were the fake news stories, and so I do truly hope that you knew that and had already worked that out. If you did indeed recognise them all as fake news stories, then this poll reports that you are in a minority because the vast majority identified they are true and accurate.

Yes, the correct and wholly rational response to the above is indeed FFS.

Then again perhaps we should remember that half the population is indeed below average :-)

So the more serious problem does come right back to the question that Dan, and many others are now asking. It matters because clearly it has been the fake news blitz that swung the election to guy who has exactly zero experience and is wholly unqualified in so many ways. It will be a disaster of epic proportions because so many were fooled into embracing fiction as fact.

As for the poll, I should add a word of caution. The data sample was small (just 3,015), so please treat those percentages with a rather large chunk of salt, and recall my earlier metaphor – it is akin to sticking your finger in the air to see which way the wind is blowing and is not really giving you a precise wind speed measurement.

Bottom Line: Yes, I guess we did all already know what the poll is telling us.