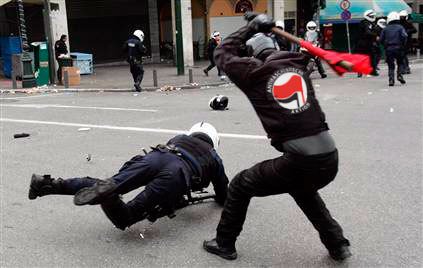 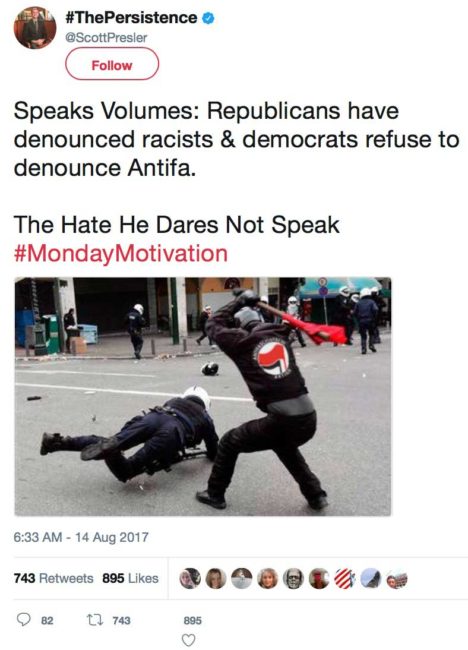 The above has been circulating along with the claim of Antifa violence. It would perhaps make a good point except there is one rather important fact – it is fake.

Snopes has the precise details along with clear decisive evidence …

An image purportedly showing an anti-fascist (antifa) protestor hitting a police officer was circulated on social media shortly after a white nationalist rally in Charlottesville, Virginia, left one woman dead and dozens injured on 12 August 2017. The photograph was frequently accompanied by the claim that both sides (white nationalists and counter-protesters) had contributed to the violence, and that while Republicans had denounced racists, Democrats had not denounced antifa protestors:

This is not a genuine photograph of an antifa protestor striking a police officer. This image was digitally manipulated to add the antifa logo to an unrelated photograph.

Indeed yes, it is fake

Here is a Guardian article from 7 years ago, and there you will find the following original picture that was lifted from that article … 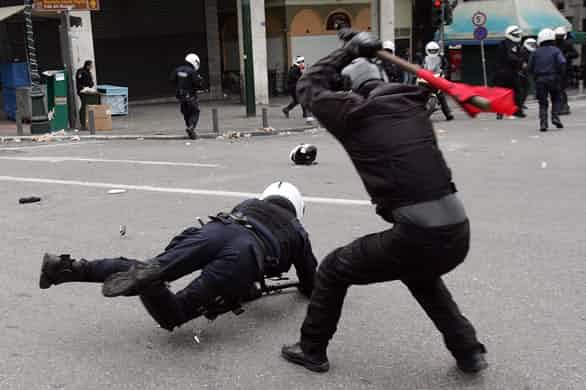 The “Many Sides” argument holds no water and has no credibility.

If you are seriously resorting to the use of photoshop to manufacture fake claims, then you have not simply lost the argument, you never had a credible argument to make.

Is This the only Fake claim?

A good part of this fight against thugs, liars, and racists is on social media. Fraudulent claims and lies should of course not be a surprise, but rather should be anticipated because the Trump administration has normalised this and practised it on an almost daily basis.