53% of people described themselves as having “no religion”, in a survey of 2,942 adults by the National Centre for Social Research.

What is their source?

The latest data on religious affiliation from NatCen’s British Social Attitudes survey reveals that the proportion of people in Britain who describe themselves as having no religion is at its highest ever level.

More than half (53%) of the British public now describe themselves as having “no religion”, up from 48% in 2015. The proportion of non-believers has increased gradually since the survey began in 1983, when the proportion saying they had no religion stood at 31%.

But this has already been published!

I’m not quibbling about the numbers, they are of course interesting but not surprising. What does quite frankly astonish me to some degree is that this has been announced now.

My point is this, two months ago I blogged this information, it really is not new.

Is NatCen milking their survey results again and again by dribbling out details and thus generating a bit of free advertising for themselves?

Perhaps not. While it is of course true that I blogged about this a few months ago, I did need to dig quite a bit. The information was buried on page 197 in the fine print of the full report. It was all there, and yet well and truly buried deeply, hence highlighting it now is wholly warranted.

The BBC article also does do more than just repurpose the NatCen press release. It explores how some of the non-religious actually find non-religious alternatives to church attendance …

Tamsin, a 26-year-old travel journalist, goes to the Sunday Assembly, a secular congregation that meets in London every fortnight.

Speaking to 5 live’s Rosanna Pound-Woods, she said: “I’m not religious at all. I like the fact that this is a way for community to come together, without having to be about religion.”

At times in her life where religion might be important traditionally, like deaths or weddings, she said: “I turn to my friends and just tend to celebrate or commiserate together.”

Another member of the congregation, Mitsky, was raised as a Jain – an ancient Indian religion – but now considers himself more atheist.

“Most religions have good basic principles, but certain religions take them maybe in a different direction which I didn’t really tend to agree with,” the 38-year-old said.

“I was heavily involved in that community here in London and I do miss it, which is why I was looking for something else.”

As for the NatCen press release, well to be strictly fair, there is additional detail in the latest data sheet that was not there a few months ago. What they have done is to take the data for all past surveys and merged it with the latest 2016 results into a table so that the ongoing trend over time becomes clear.

They also break down the latest results by age range. That reveals that as times passes belief in the UK will inevitably continue to shrink as older generations pass. As can can be seen below within the 2nd last column, while overall 53% are non-religious, only 27% of the older generation are that way, and as many as 71% of the young reject religion. If you check the 1st column it is also clear that the C of E will shrink a lot more … 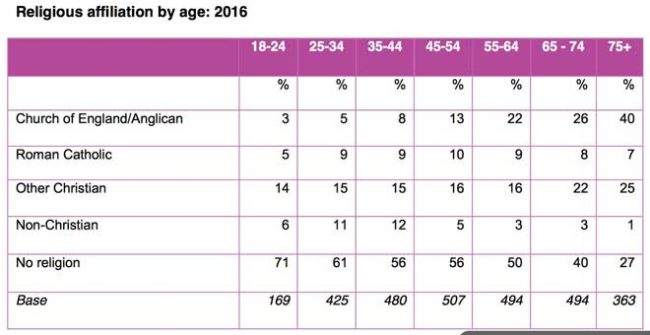 To be wholly clear about this – people do not become religious as they age. If that was the case, then religion should not decline over time, but clearly it is doing exactly that.

Why are the young not so religious?

So is a press release for this warranted?

Basically yes, because last time all the detail was deeply buried hundreds of pages into a very detailed report. This time it highlights a rather dramatic social trend – the ongoing decline of a belief in things that are not actually true at all.

The inevitable clutching at straws pops up …

The Bishop of Liverpool, the Rt Rev Paul Bayes, said the figures bring a “continuing challenge to the churches” in “a sceptical and plural world”.

But he said people’s hearts and minds remained “open”.

“Saying ‘no religion’ is not the same as a considered atheism. People see the point of faith when they see the difference faith makes,” he said.

“We need to keep finding ways to show and tell those who say they have ‘no religion’ that faith – faith in the God who loves them still – can make that life-transforming difference for them and for the world.”

Religious believers are now a minority. The Anglian Church is a very slim and rapidly shrinking demographic. Given that fact, then  …

Humanists UK are quite rightly asking these questions …