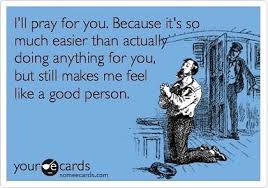 What is driving today’s posing is something that has come out of the Alaska Supreme Court concerning the use of Prayer instead of medical care.

First, before we get into what has happened, let’s do a quick bit of background.

Many people sincerely believe it works, but when put to the test, it does not. I blogged about this seven years ago. Within that posting I went though all the clinical trials of prayer. The most rigorous was the 2006 “Study of the Therapeutic Effects of Intercessory Prayer” (STEP), also commonly called the “Templeton Foundation prayer study” because they funded it. It involved 1,802 coronary artery bypass surgery patients.

Has anything changed since then?

Not really, I’m not aware of any big studies that have been conducted since I wrote that posting. The quote I finished that posting with still stands …

“in the entire history of modern science, no claim of any type of supernatural phenomena has ever been replicated under strictly controlled conditions.” – Bruce L. Flamm, clinical professor of obstetrics and gynecology; University of California, Irvine

Side Note: This is the cue for folks who sincerely believe it works to suggest that you need to have just the right flavour of belief for it to work.

If you are an adult with mental capacity, you must give your consent before you can be given medical treatment. This is a very universal principle. It is true in the US and it is also true in the UK. The UK’s NHS website explains exactly this.

There are some obvious exceptions. For example, Mental Health law generally permits people to be detained in certain circumstances for what are (I hope) rather obvious reasons. Another common example is that if you are in immediate danger and not conscious, then generally medical practitioners will try to save you.

If however faced with a patient who clearly understands the implications and treatment is refused, then medical professionals will adhere to the wishes expressed.

It concerns a decision made by a caregiver, in this case a daughter.

The daughter, not named, decided that her elderly mother should not receive medical care and that instead, she would simply pray for her. The daughter was a member of a religious group that avoided modern medicine and instead opted for just prayer.

the daughter declined to treat the woman’s epilepsy and said she would use prayer to treat her, even in a medical emergency.

The huge concern here was that she was making life and death decisions for somebody else, not herself. A court case decided that the daughter was to be removed from the role of “caregiver”. There was an appeal and so the case went through the legal system eventually reaching the Alaska Supreme Court.

To be specific; This case.

They have now decided it as follows …

We conclude that the superior court did not abuse its discretion when it removed the daughter as her mother’s guardian. We also conclude that removing the daughter as guardian did not violate the Alaska Constitution’s free exercise clause because the State possessed a compelling interest in preventing harm to the mother.

This decision establishes a rather important principle in law. While religious liberty is a key principle that is respected, if it results in an individual making a decision that places another individual in danger, then the state has the right to act in the interests of that other individual. Doing so is justified by a compelling interest.

Side Note: If you are wondering about the turn of phrase “compelling interest” within the judgement then this is what it means. People have rights established in law. Legally the state can only override those rights if they have a “compelling interest” that is greater than an individual right. Law is often all about striving to establish the correct balance between these competing forces.

Steve Novella adds the following within a posting on this …

This has direct implications for so-called alternative medicine, much of which is faith-based or at least entirely subjective. Some of it is pseudoscience – it tries to be scientific, but does it badly. But much is unapologetically faith-based (although they may use terms like intuition, culturally-based, traditional, or other euphemisms for faith). By labeling faith healing as “medicine” (even with qualifiers) they are making an end-run around regulations that serve quality control and the establishment of standards within medicine. They short-circuit the separation of church and state, and the distinction, now affirmed by this court, between objective medicine and prayer, or any form of faith healing. This is demonstrably eroding the state’s ability to meet their “compelling interest” to protect people from fraudulent or harmful health care, or substituting magic for health care.

I really would like this legal decision to ripple out and impact much of the quackery that prevails in a good way . Sadly, I suspect it will not.

However, an important legal position that is pro-science has now been established. It sets a precedent that other courts can follow.