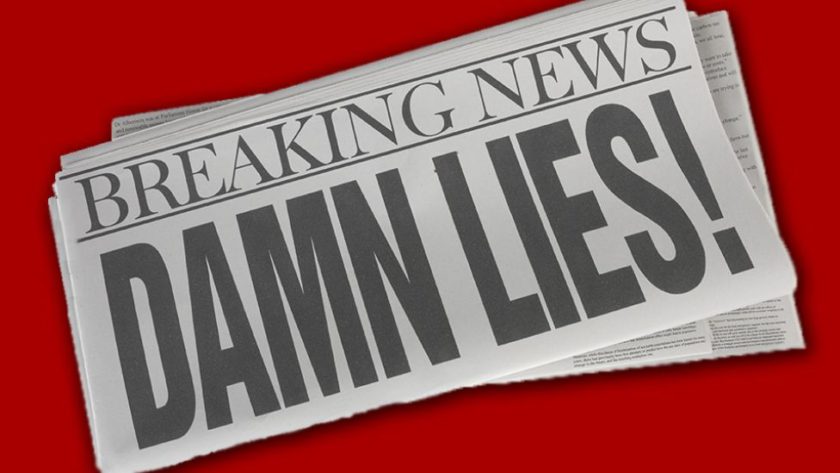 Back in 2005, a chap called Nathan Poe made an observation within an on-line discussion group as follows …

Without a winking smiley or other blatant display of humor, it is utterly impossible to parody a Creationist in such a way that someone won’t mistake for the genuine article.

that, without a clear indicator of the author’s intent, it is impossible to create a parody of extreme views so obviously exaggerated that it cannot be mistaken by some readers or viewers as a sincere expression of the parodied views

In other words, this is where somebody might tweet out an Onion article that they feel supports their specific position, and remain utterly oblivious to the realisation that The Onion is a satire site.

Does such a thing really happen?

You bet it does, for example Sean Spicer recently retweeted an Onion satire of himself. He appeared the think it was high praise when it was in reality mocking him for his well articulated misinformation.

James McDaniel recently had a go at testing Poe’s law on Trump supporters. What he did was to create a fake news website that pandered to the various conspiracies that float about within that alternative Trumposphere universe. He made sure that the stories he wrote were so utterly ridiculous and absurd that even a hard core Trump supporter would not be able to seriously digest it.

It was simply a joke and a bit of fun, there was no serious intent here at all.

Within about 10 days he had 1 million views.

Having debunked his stories, Politifact reached out to him and asked him what was going on …

In the course of our reporting, we reached out to McDaniel through an email address on his website. Surprisingly, he agreed to talk to us about his website and the fake stories. His story offers a glimpse into the fake news industry.

McDaniel, who lives in Costa Rica and works for an American nutrition company, says his website was dreamt up as a side project for laughs.

Unlike many fake news purveyors, McDaniel didn’t want to sway conversations or make money through ad revenue. Curious about how easily people could be fooled, he cooked up a post he thought would normally sound too crazy for anyone to believe, just to see if it caught on.

His first story was a fabricated tale about how Obama allegedly ran a pedophile ring out of the White House, and then McDaniel decided to create more. He started posting the links he created to Donald Trump fan groups on Facebook to see if they would take the bait.

UndergroundNewsReport.com was launched Feb. 21. In less than two weeks, more than 1 million people had viewed stories on the site and spread them across social media platforms.

“I was surprised by how gullible the people in the Trump groups were, but as I continued to write ridiculous things they just kept getting shared and I kept drawing more viewers,” McDaniel told PolitiFact. “I saw how many fake ridiculous stories were making rounds in these groups and just wanted to see how ridiculous they could get.”

McDaniel even tried to warn viewers by putting a disclaimer on the bottom of his web pages saying his posts “are fiction, and presumably fake news.” While a handful of people took the time to email him to ask if stories were real or send hate mail, most of the comments on his links blindly accepted what he wrote as the truth.

For example, many readers of the story about Clinton’s lost email appear to believe WikiLeaks founder Julian Assange was releasing information tying the former Democratic presidential nominee to Pizzagate. That’s the conspiracy theory that claims Democrats are secretly running a pedophile ring out of a D.C.-area pizza shop.

“It’s over for them but PIZZAGATE goes VERY deep it WILL Rock the world I also believe killary has kuro (sic) disease from eating body parts the symptoms are there she is very close to destination of hell where she belongs,” a commenter listed as “Bryon” wrote.

“Trump is being set up for impeachment and Pence wants his place,” a reader named “Di” commented. “If Obama, Clintons, Soros re not arrested now and their funds frozen there’s going to be a revolution in May.”

McDaniel said he would sometimes peg his posts to real news events, but more often, he just made them up wholesale. He’d find photos on the Internet and generally rip off an article without even rereading it. In all, he speculated, he worked on the site about two hours per day.

“I think that almost every story I did, or at least the successful ones, relayed off of things that Trump supporters already believed. Obama is a Muslim terrorist. Hillary (Clinton) is a demonic child trafficker,” McDaniel said. “These are things much more widely believed among Trump supporters than I had previously thought.”

I checked. In big bold letters right at the bottom of his site he clearly spells it out …

Underground News Report is a news and political satire web publication, which may or may not use real names, often in semi-real or mostly fictitious ways. All news articles contained within Undergroundnewsreport.com are fiction, and presumably fake news. Any resemblance to the truth is purely coincidental, except for all references to politicians and/or celebrities, in which case they are based on real people, but still based almost entirely in fiction.

Was it just for the Money?

while his site used advertising from the Content.ad network, he didn’t make much off it — a total of $615, he said, which he planned to donate to the 2020 Democratic presidential nominee.

When I started this site, I had no idea that the stories would garner this much attention. While writing them, I was aiming for stories that no one would believe, but rather would be satirical in an age where disinformation is so prevalent.
Just for fun, I decided to post some of the stories in Trump fan groups on Facebook to see the reactions.

To my surprise, the Trump masses embraced my stories as fact, almost universally. It seemed that there wasn’t anything I could write that was too wild or outrageous to be believed by this particular audience.

If I wrote about CNN being fake news and connected to ISIS, readers would agree wholeheartedly with my fabricated article. If I wrote about a black liberal or Obama supposedly saying something controversial, the response was unbridled racism and hatred. When I wrote about Hillary Clinton’s new emails that proved she was a child sacrificing maniac, people screamed for her head.

I was startled that in today’s world, so many could be so willfully ignorant. It’s truly a frightening time when a group of people screaming, “FAKE NEWS!” at the top of their lungs, live, eat and sleep falsehoods.

I, however, cannot claim that I did not enjoy my week of deception. There was something artful about the whole process. Even writing this now, I feel like one of the Buddhist monks who spend months or years creating a sand mandala only to wipe it up and destroy it upon completion. However, I find it morally necessary to clean up this mess, for a society that loses the ability to distinguish fact from fiction is a society vulnerable to anything.

He really did test Poe’s law to complete destruction and it held.

He told them he made it all up, and yet check the comments under the article where he explains that and you find stuff like this …

Theirs some fake stuff on that website but more than half of its the truth.

Ya I’ve already seen a lot of these stories proven correct so I don’t know if you work for the CIA or what but I can tell you are lying.

… and so even when the author tells them it is all BS, some are willing to still believe it.

Present a story that plays to a narrative that has been invested in at an emotional level, and you will find people will believe absolutely anything. Present facts that then conflict with that narrative and you will discover an immunity to such facts. If you have ever wondered why you just can’t reason Trump cult supporters out of the embrace of such mythology, it is because they never reasoned themselves into that position in the first place.

“Reasoning will never make a Man correct an ill Opinion, which by Reasoning he never acquired” – Jonathan Swift, 1721