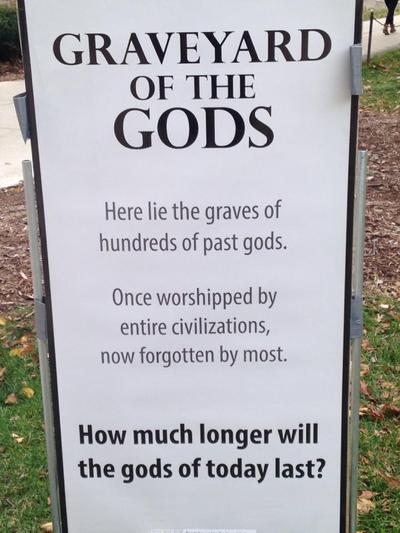 Over at the University of Wisconsin–Madison a graveyard has appeared, as it has for the past few years, that is dedicated to gods that have fallen out of favour and so are now dead and gone, not that there were ever here except in the minds of their followers. There are plenty to choose from, I’m sure we are all familiar with some of their names … Thor, Zeus, Loki, Apollo, etc… all now buried in the past and no longer earning a living by demanding that humans bow down and worship. 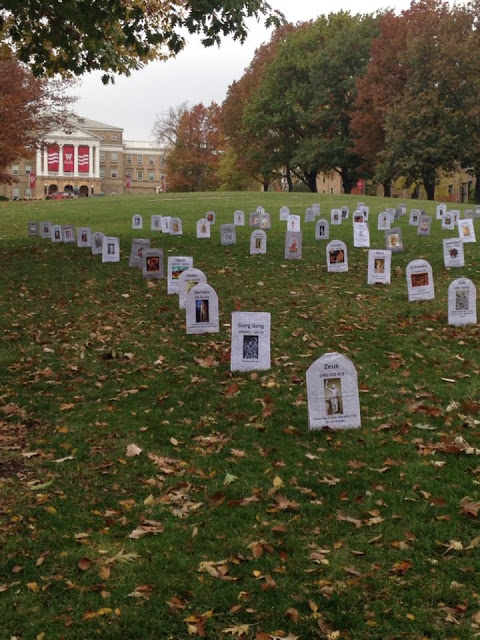 It is quite a clever invitation to pause and think – if indeed these gods are all truly dead and buried, then what about the current collection, could they face the same fate? (Hint: yes they could and will in due course)

As for accuracy, well they did give it all some thought, and so the wording reads “Forgotten by most“, because of course some nut will inevitably pop up and claim to be a worshiper of some obscure god who has a grave within their graveyard of the gods.

So why is this scary?

We have a thriving modern industry that churns out lots of fun stuff for entertainment that involves ghosts, zombies etc… but there is something that is so utterly terrifying to many that even the possibility of it being true is rapidly dismissed, and that is perhaps why some do find a graveyard of the gods to be a bit uncomfortable, because it is a rather strong reminder.

There are no gods, there is no afterlife – this is it, ‘now’ is the one and only life you get. Coming to terms with that is the ultimate terrifying thought that many humans retreat from and so belief in things that have no evidence at all still prevails. It is perhaps understandable that it is like this because it is emotionally far more comfortable to embrace the fiction and truth and avoid dealing with the way that things really are.

So is it a case of “Eat drink and be merry” as the Bible suggests? I personally do not find that very appealing, and I suspect many others also don’t either. Personally, I find the following a lot more satisfactory …

If there are Gods and they are just, then they will not care how devout you have been, but will welcome you based on the virtues you have lived by.

If there are Gods, but unjust, then you should not want to worship them.

If there are no Gods, then you will be gone, but will have lived a noble life that will live on in the memories of your loved ones

That quote has been wrongly attributed to Marcus Aurelius, it’s not him. I do however like it because it is the distinct opposite of the rather flawed Pascal’s Wager, and is what might be termed, an Atheists Wager.

So not only do you not need a god to be motivated to live a good life, but you also don’t need to embrace any of the currently prevailing god myths as truth because they are claims that have no evidence at all.

OK, Yes, I did promise something truly scary

This is one of my favourites – basically a drone dressed up for halloween and deployed as a prank … enjoy.