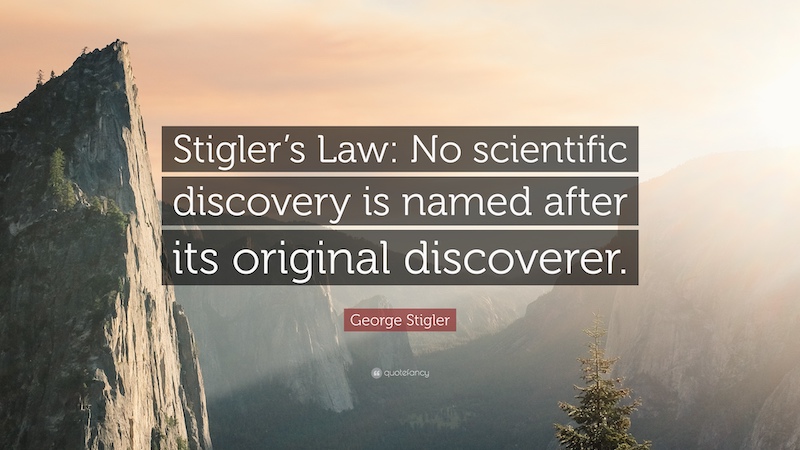 On this week’s episode of the “Skeptics Guide to the Universe” (Episode 730), they did a “Science or Fiction” quiz that was based upon Stiglers law.

What is Stiglers law?

University of Chicago statistics professor Stephen Stigler wrote a 1980 publication titled “Stigler’s law of eponymy“. Within this he states that no scientific discovery is named after its original discoverer.

No wait, this simply can’t be correct, I can think of lots of examples of rather basic discoveries that are named after the person who worked it out.

This is indeed his … right?

Historians of Mesopotamian mathematics have concluded that the Pythagorean rule was in widespread use during the Old Babylonian period” (20th to 16th centuries BC), over a thousand years before Pythagoras was born

Nope, … “Dyson was not the first to advance this idea. He was inspired by the mention of the concept in the 1937 science fiction novel Star Maker, by Olaf Stapledon”

Nope … “Fermi was not the first to ask the question. An earlier implicit mention was by Konstantin Tsiolkovsky in an unpublished manuscript from 1933”

This just must be his, he even got a Nobel Prize for it.

Nope …”These approaches were quickly developed into a full relativistic model, independently and almost simultaneously, by three groups of physicists: by François Englert and Robert Brout in August 1964; by Peter Higgs in October 1964″

You can keep going …

This is of course not a rock solid law of the universe, it is simply an observation regarding a common pattern. Look hard enough and you will find exceptions. The point that is interesting is that you really do have to look very hard to find exceptions, and so this naturally causes you to wonder what is going on.

Discovery is never done in isolation

The history of many things is often a story of a long sequence of small tweaks made by many different people over a very long period of time. A well-known example is the light-bulb. We often associate Edison with this, but it has a long complex history that dates back as far as 1761. Edison gets the credit because his final tweaks pushed it over the line and made it practical for general use.

Often a name is associated with something because of those last few tweaks, and unfortunately that fails to recognise the road that led to that moment. It also often fails to recognise the vast numbers of researchers and associates who are also all part of the same story. Edison gets credit for the last few tweaks, but it was not just Edison all by himself, he had a lot of staff working on it.

We do have one example – Stiglers law itself

Stigler’s Law just must be his and is original to him … right?

Nope … Stigler himself named the sociologist Robert K. Merton as the discoverer of “Stigler’s law”, but even that claim is not wholly true. The pattern is a common one and so many have made observations regarding it …

“For substantially all ideas are second hand, consciously or unconsciously drawn from a million outside sources and daily used by the garnerer with a pride and satisfaction born of the superstition that he originated them; whereas there is not a rag of originality about them anywhere except the little discoloration they get from his mental and moral caliber and his temperament, which is revealed in characteristics of phrasing. When a great orator makes a great speech you are listening to ten centuries and ten thousand men but we call it his speech, and really some exceedingly small portion of it is his. But not enough to signify. It is merely a Waterloo. It is Wellington’s battle, in some degree, and we call it his but there were others that contributed.

It takes a thousand men to invent a telegraph, or a steam engine, or a phonograph, or a photograph, or a telephone or any other important thing — and the last man gets the credit and we forget the others. He added his little mite — that is all he did. These object lessons should teach us that ninety-nine parts of all things that proceed from the intellect are plagiarisms, pure and simple; and the lesson ought to make us modest. But nothing can do that.”