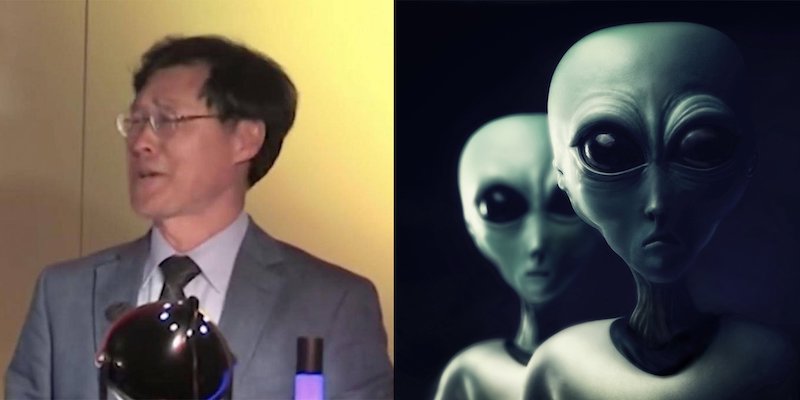 In the category of “Weirdest claim”, we have an item regarding aliens that truly takes the biscuit. So what is the best reaction when faced with a truly weird claim?

Via the Oxford Student, who have recently highlighted the following story, we have this …

He is an Oxford Academic, so it must be true?

Don’t let the term “Oxford Academic” fool you into thinking this has any credibility. While the Oxford Student initially claimed that Dr. Chi was a professor, they later corrected that. He is actually a language instructor in Korean at Oxford’s Oriental Institute, and yes I checked, he really is, this is not a spoof.

While I’m confident that he is a fine Korean language instructor, when it comes to the topic of either “aliens” or “climate change” … er no.

The History of his claim

Back in 2012 he gave a lecture at the the Ammach Conference, titled ‘Alien Abduction and the Environmental Crisis’ in which he outlined his theory concerning the presence of aliens on earth. You can find it online here.

That was seven years ago, so you might wonder if that was simply a quirky moment in his life, or perhaps was him simply having a bit of fun by trolling the conference with a spoof. Alas no. Last year, in April 2018, Dr Chi approached The Oxford Union to propose a debate on the subject. The proposed motion was: ‘Aliens exist on earth, Yes or no?’. The Oxford Student notes that this proposal was not accepted by the then president-elect.

Dr Chi has also written a book about all of this in Korean.

What exactly does he believe?

The Oxford Student reached out to him to see if he still believes all of this stuff. They not only discovered that he does, but also obtained the following details from him …

Dr Chi believes that there are four types of aliens: small; tall and bold;  aliens with scales and snake eyes; and finally, insect-like aliens. The latter of these seems to be the highest in the hierarchy, he said, and gives orders to the lower ranks.

Whilst he states that cases of alien abductions are diverse, he notes that “what is common is that they are all conducting some kind of biological experiment, including the production of a hybrid.”

Explaining his theory of a comprehensive bio-system, Dr Chi stated, “If they are far, they shouldn’t be concerned about us. I don’t think they are from far away, they are just next to us, we can’t see them. We can use an analogy of fish which can think and perceive things only in the way they can and humans also perceive only in the way we can, so our perception of the world is limited by our organs.”

According to Dr Chi’s theory, the fact that aliens and humans share the same biosphere means that climate change bears a negative impact on them, thus accounting for their increased interference in human affairs.

Dr Chi went on to outline his three hypotheses as to why aliens may want to produce hybrids with humans. He stated, “One possibility is that they find our DNA valuable for the preservation of the stock. Secondly, to create species which can survive in the future climate conditions…Thirdly, some abductees report that these hybrids are of a very high intelligence, so are they producing these hybrids as a problem-solver, a future leader?”

When asked whether he holds a pessimistic view of the future, Dr Chi expressed concern that there is a lack of political will to prevent climate change even if we have the necessary technology. He said, “Judging from the way the ETs are acting they have a better view of our future, perhaps it is pointing to a pessimistic future”.

He has lots of evidence for all of this … oh wait, no he does not. The amount of evidence he has that verifies “aliens”, and any of the associated claims, has been precisely measured, it is exactly zero.

Lesson 2. Many people will boldly assert things with a great deal of confidence. Often what they promote will be a sincerely held belief. Not only are you are under no obligation to believe it, you do not even have to debunk it.

The Standard of Evidence

It takes many forms, and so here are a few variations.

The Latin proverb quod grātīs asseritur, grātīs negātur (“What is asserted gratuitously may be denied gratuitously”), was commonly used in the 19th century.

If faced with claims that come with no evidence, then the best response is to dismiss it, there is no need to disprove what has never actually been proven.