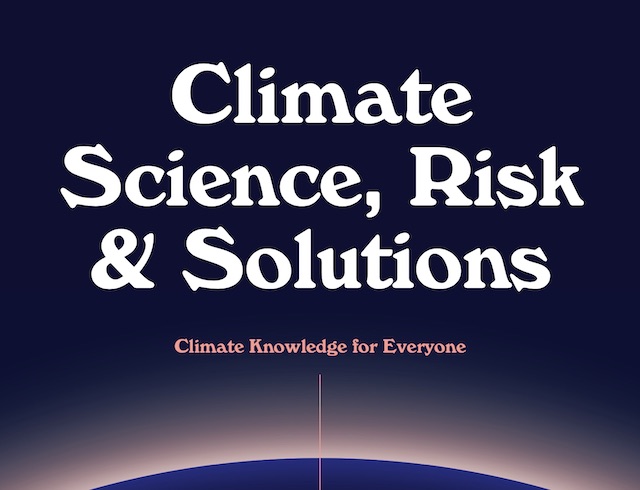 To start us off gentle in the week, I have a pointer to a rather good MIT Website. They have put together a very accessible and digestible portal. It is designed to distill our current understanding of Climate Science down into a very accessible summary.

Here you can either read the brief introductory text, or click a button to listen to a climate scientist explain it in a jargon free manner. Then just below that you have a clickable index that lays out all the available information …

What is the story here behind this?

The “About” section explains it as follows …

The goal of this site is to summarize the most important lines of evidence for human-caused climate change. It confronts the stickier questions about uncertainty in our projections, engages in a discussion of risk and risk management, and concludes by presenting different options for taking action. This site sticks to the facts and does not get into politics. We hope that the facts prepare you for more effective conversations with your community about values, trade-offs, politics, and actions.

They also have a Press Release

The MIT Press Release, titled “Climate knowledge for everyone“, lays out the details. I’ll simply drop it all here because it gives you some additional insights into the thinking behind this …

MIT Professor Kerry Emanuel has made it a personal mission to speak publicly about climate change. He felt a new and surprising duty to speak up after the scientific issue became politicized in the United States. In fact, political identity is the number one indicator of whether or not an American agrees with the irrefutable science of climate change.

“The only remedy I can see is for scientists to make more effort to inform the public with hard evidence, presented in an easily digestible but accurate way,” says Emanuel, who is the Cecil and Ida Green Professor of Atmospheric Science at the MIT Department of Earth, Atmospheric and Planetary Sciences. “Fortunately, more and more scientists are stepping up to this challenge.”

And Emanuel is one of them. In addition to his frequent public lectures and editorial pieces, he is the author of “What We Know About Climate Change,” which was recently selected by The New York Times as the book to read to start learning about climate change. Now, he has partnered with the Office of the MIT Vice President for Research, MIT Environmental Solutions Initiative, and MIT Open Learning to develop an online resource that lays out the facts about climate change with the candor, reason, and humility that have become his trademark.

The new website, climateprimer.mit.edu, is an interactive space in which the public can explore climate science, climate change, risks, and solutions. Through 11 short digital “chapters,” the site leads readers through the story of how scientists came to realize that human actions are changing the Earth’s climate, as well as the open questions that scientists are still working to answer. Along the way, readers can interact with graphics, quizzes, narration, videos, and additional resources to go deeper on the topics they find themselves most curious about.

“I wrote the climate primer to provide a concise account of the state of the art of climate science, aimed at an educated but not necessarily scientific audience, and being clear not only about progress that has been made but about remaining uncertainties and challenges,” Emanuel says.

The site has already caught the attention of people around the world; it was even nominated for a Webby award for Best Individual Editorial Feature.

“For us, the Webby nomination is really just a means to an end,” says Laur Hesse Fisher, who leads climate change communications and engagement at the MIT Environmental Solutions Initiative, and who worked on the interactive version of the primer. “We want as many people as possible to understand that the best scientists in the world and the MIT community as a whole are very concerned about the risks of climate change, and that every day we wait to take action, the situation gets more dire. I hope this nomination can help us spread that message.”

“At this point in history, it is incontrovertible that climate change is presenting serious risk,” says Emanuel. “We cannot continue to wait for more certainty before taking concrete measures to deal with the risk. Reasonable people will differ on the optimal path, but that should not stop us from making decisions that will so strongly affect our descendants.”

Go check it out – https://climateprimer.mit.edu