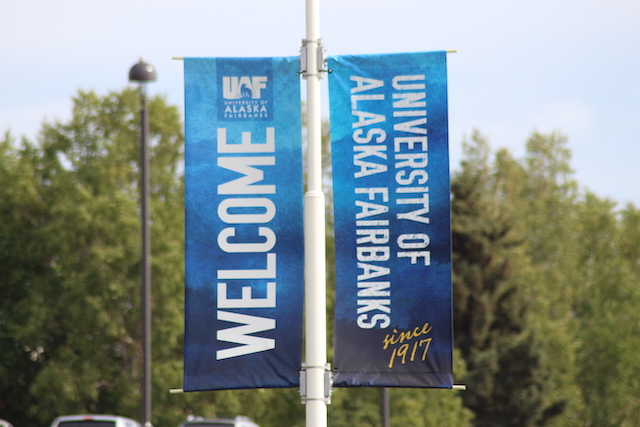 The University of Alaska is a rather important centre of climate research. As explained by Brian Kahn in Gizmodo ..

…It’s also a major hub for climate research in the changing Arctic and what it means for ecosystems, livelihoods, health, and more. In emails to Earther, researchers called the system “essential” and “the backbone” of Arctic research in the U.S.

Rick Thoman, a climate researcher at the university-headquartered Alaska Center for Climate Assessment and Policy, told Earther that the system is the “primary academic center in the United States doing Arctic research, not just physical/biological sciences but social science on the needs of the peoples of Alaska. No other institution in Alaska can do this work.”…

… the science done at these institutions is of critical use within the state where the problems climate change poses are extraordinary. Communities are being washed into the ocean and upended by permafrost thawing. They’re facing an increasing risk of infectious diseases, and the destruction of traditional livelihoods and ways of life. Without a dedicated home, research on these subjects will fragment or cease to exist, leaving Alaskans in the dark about the threats of climate change and science-based solutions. And the loss of research would ripple through the entire U.S. Arctic research community.

What exactly is the disaster here?

To sum it up, the essence of this disaster is that the Republican Governor Mike Dunleavy is slashing their budget by 41%.

But he needs to balance the budget right?

The utterly insanity of this is that his cuts have absolutely nothing to do with balancing the budget. There are far better ways of doing this. For example there is what is known as the Permanent Fund Dividend. This is the dividend paid to anybody living in Alaska and is sourced from oil revenue. The goal of the Alaska Permanent Fund is .. “to continue benefiting current and all future generations of Alaskans“.

Cutting that dividend and preserving the most valuable investment, education, is a no brainer, and so clearly his priorities are totally out of whack here.

Insights from The Anchorage Daily News

“The fundamental question is now squarely before Alaskans. What’s more important: a healthy economy, our schools, university, and seniors, or doubling the Permanent Fund Dividend at the expense of essential state services? The governor has made his choice clear,” Edgmon wrote. …

…“AFN supports the overall parameters of operating budget the Legislature passed,” AFN President Julie Kitka said in a prepared statement. “We urge the House and Senate to override these uncalled-for vetoes, particularly those related to education, health, and public safety.”…

Is that possible, can the House and Senate in Alaska stop this insanity?

The University has this banner up on their website …

On Friday, June 28 the governor vetoed the state-funded portion of the university operating budget by $130 million. When combined with the $5 million cut previously approved by the legislature, we are being asked to cut $135 million, or 41% from our current state funding level of $327 million The only possible recourse to this budget veto is to seek a legislative override and ask our legislators to support UA’s state funded budget of $322 million – the amount approved by both the House and the Senate. Please ask your legislators to affirm their support for the university by voting to override this veto. If not overridden, this veto will strike an institutional and reputational blow from which we may likely never recover.

When can this happen?

By law it must occur within five days of the start of the special session, which begins Monday, July 8. That means the veto override must take place no later than Friday, July 12.

if the Legislature does not override the governor’s veto, the University’s BOR will meet on Monday, July 15, and proceed with the process of shutting down and laying off rather a lot of services and people.

It means people who thought that they would be getting their degree and education, will no longer do so.

As a side note, Dunleavy got his degree from the University, and that just might not have been possible if his proposed attack upon education had been initiated while he was attending.

The best play they have now is to push nonstop to override the veto.

The University of Alaska has a Budget Communications page here that is being updated as things unfold.