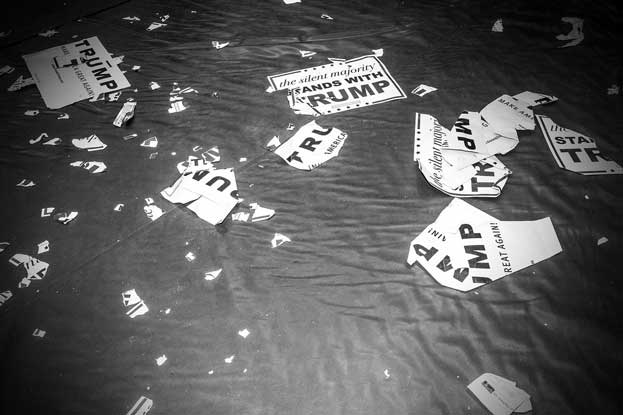 Much is being written about fake news and so there has been a dawning realisation that we live in an age where there is a very distinct reality gap.

Steve Benen writes on MSNBC about how disconnected some are from reality. He describes it as follows …

what struck me as especially notable about the new survey results is the persistence of the so-called “reality gap.”

* Stock Market: Since the president was elected, the stock market has soared, nearly tripling since the height of the Great Recession. PPP found that 39% of Trump voters believe the market has gone down under Obama – which is also the exact opposite of reality.

* Popular Vote: As of this morning, Hillary Clinton received roughly 2.7 million more votes than Donald Trump, but PPP nevertheless found that 40% of Trump voters believe he won the popular vote – which is, once again, the exact opposite of reality.

* Voter Fraud: Even Trump’s lawyers concede there was no voter fraud in the presidential election, but PPP found that 60% of Trump voters apparently believe “millions” of illegal ballots were cast for Clinton in 2016 – which isn’t even close to resembling reality.

We are, in other words, looking at a political landscape in which much of the president-elect’s core base appears to be living in an alternate reality.

Well yes, but none of this is a surprise to some because it has always been like this.

Steve does make that point as well …

as regular readers know, the “reality gap” isn’t even new: for years, many Republicans have told pollsters they believe border security has weakened under Obama (it’s actually strengthened), the deficit has gotten bigger (it’s actually shrunk by a huge margin), and the nation’s uninsured rate has gone up (it’s actually at an all-time low).

To ask why it is like this is of course an important question to ponder over, but if a meaningful answer is to be achieved then there also needs to be a realisation that the entire history of the human species has always seen the existence of a reality gap, this is not new.

There exists a form of reality gap that is so pervasive that we even have a special word to describe it. It is socially acceptable, and also for many truly noble.  Countless numbers of human lives have been defined by this pervasive reality gap. It is one that has exactly no evidence at all, and yet despite that observation, it is very very popular.

The word that we use to encapsulate this reality gap is the word ‘religion’.