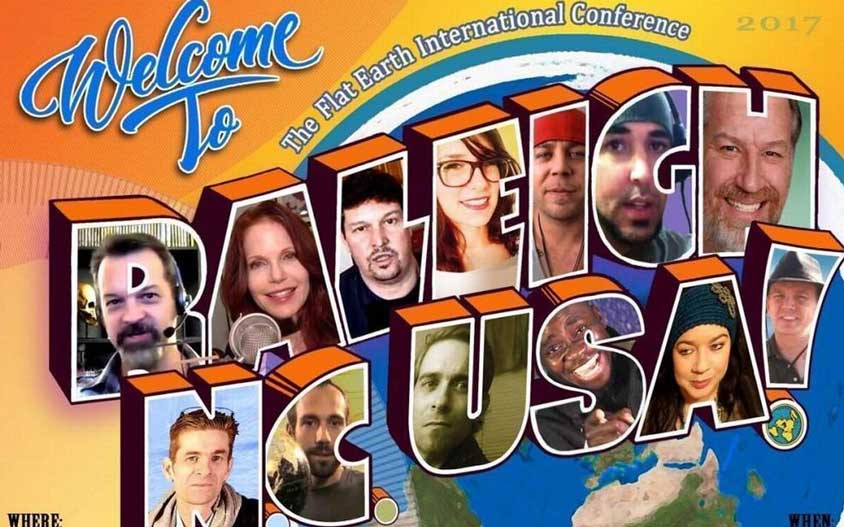 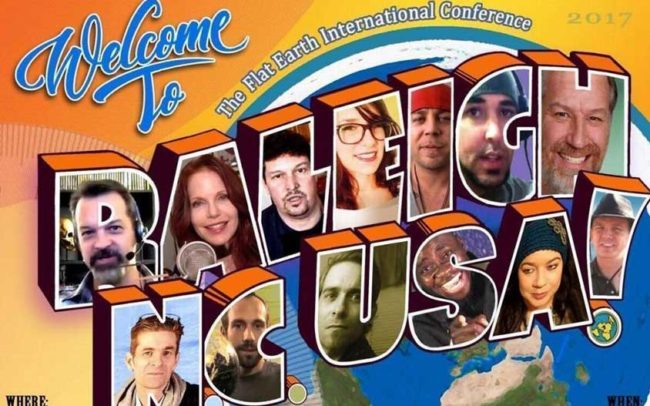 A local paper reports that Cary in North Carolina is going to host a conference of Flat Earth believers in Nov, and no doubt they will come flocking from all around the globe to attend. There are of course people who promote the idea, not because they actually believe, but simply for a laugh and quite enjoy the reaction they get. This however is not that because these are the true believers, the people who are quite convinced that Diskworld is a documentary.

In November, more than 500 people will gather in a Cary hotel to promote their common belief: The Earth is flat as a Frisbee, motionless in space, bounded on all sides by a wall of ice.

The article then goes on to explain that these are not simply flat-earth believers, they also come with a vast trove of conspiracy theories and bizarre beliefs …

Speakers at the Flat Earth International Conference bring a variety of rationales for debunking centuries of established science: their interpretation of the Bible, a vast plot that faked the moon landing and the international treaties that keep people from discovering the true nature of Antarctica.

On their YouTube channels, speakers at the sold-out Embassy Suites conference also dabble in a wide array of conspiracies: the 9/11 attacks never happened, the shootings at Sandy Hook Elementary were a fiction, the government is attempting mind control by secretly introducing a sentient black goo.

If you are getting all excited then you just might be able to grab one of their $149 tickets. The $249 VIP passes are all sold out. If however you are choking on the idea of spending $249 to go listen to BS, then relax and just think of it as a tax on stupidity.

The society’s ranks also include one member from Raleigh, two from Charlotte and three from Fuquay-Varina. Those who could be reached said their membership does not stem from serious globe skepticism.

Jimmy McPeek, 51, an information technology worker in Fuquay-Varina, keeps his membership certificate framed below his college diploma and a small flat globe model on a bookshelf.

“I’m not going to say I believe the world is flat,” he said. “I’ve been on enough planes. I’ve seen the curvature of the Earth. It was a fun thing to do.”

Ben Evans, who is brewmaster at Boylan Bridge Brewpub, said his membership came as a gift.

“I’ve still got my Flat Earth Society medal at the house,” he said. “However, I am pretty sure we’re floating around in space on a sphere.

In other words, they were in it as a joke and for a laugh, not because they actually took the idea seriously.

The Conference is for those that Truly believe

Check the agenda and you will discover that these are the true believers. Here are a few gems that illustrate that this is the “Because the bible says so … anti-science” crowd …

The grasp that these people have on reality is not just elusive, but is so devoid of any actual substance that you would be unable to find any trace of reason even if you used a tunnelling electron microscope to search for it …

“Nearly all of the astronauts were Freemasons, too,” wrote Rob Skiba, a filmmaker and writer who will appear in Cary

… Skepticism among conference speakers extends to the reporting on many of the calamities of this centuries, which they mock on YouTube. On his “Globebusters” segment, electrical engineer Bob Knodel describes images of the planes hitting the World Trade Center as a CGI composite.

“Every single time you go to an event where it’s a vigil for people whose lives were lost in 9/11, or the Boston bombing or Sandy Hook, or talk among your friends at work about how tragic it was … you’re feeding it. You’re feeding a fire. You’re doing the work of the elites,” said Patricia Steere, a conference speaker who hosts the channel “Flat Earth and Other Hot Potatoes.”

For those struggling with this

Scott Kelly recently responded on twitter with this gem that was taking aim at rapper B.O.B’s GoFundMe campaign that aims to raise funds to prove that the earth is flat …

… er no, they are discouraging you because you are wrong.

Astronauts Terry Virts and Buzz Aldrin jumped in as well …

I can save BoB a lot of money- The Earth is round. I flew around it. https://t.co/F7qAovPEng @bobatl @BBCWorld

I did too. It's called an orbit: the curved path of a celestial object around a star, planet, or moon. https://t.co/h8GQJadfxD

You can test all this yourself, you don’t need to just believe

Popular science lays out 10 observations that you can personally check to verify that the earth is not flat. They also distilled that down into 5 and turned those 5 into a YouTube clip for those that find reading to be a tad tedious …