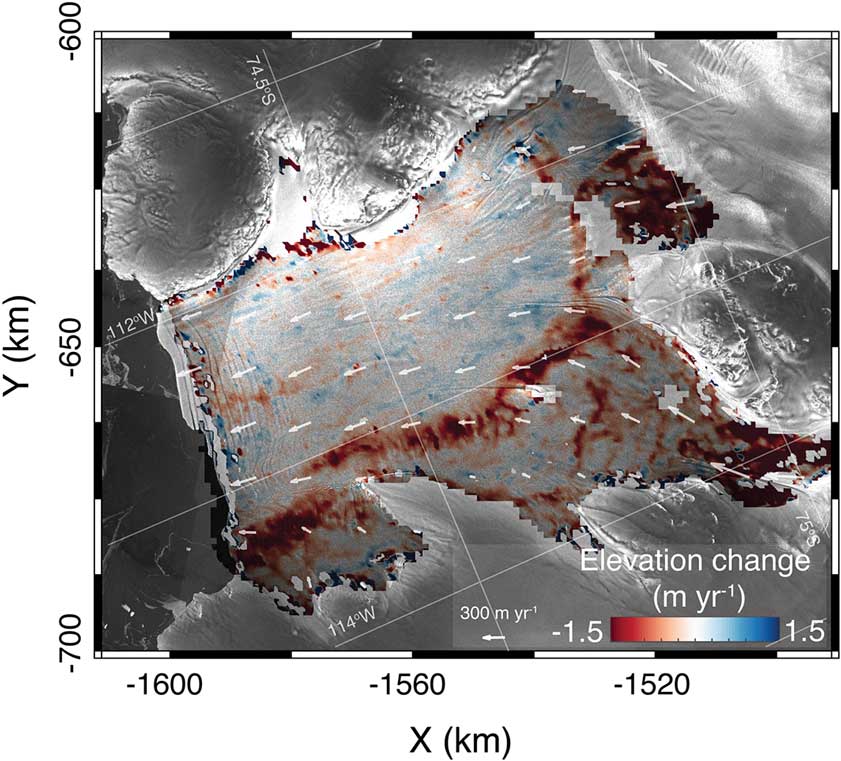 A new study grants us a bit of further insight into how a warming ocean is impacting the Antarctic. Entitled “Channelized Melting Drives Thinning Under a Rapidly Melting Antarctic Ice Shelf“, it was published a few days ago in Geophysical research Letters (full open access). It describes how the ocean is eating away underneath the Dotson ice shelf.

Their quick summary is as follows …

Ice shelves act as safety bands around the Antarctic ice sheet. Many ice shelves are currently thinning, leading to acceleration of the grounded ice behind. Here we show that ice shelves’ thinning is stronger along a channel structure formed by the ocean circulation under the ice shelf. The thinning is 3 times higher than the ice shelf’s average, hence leading to a more rapid weakening of the ice shelf. This study provides evidence of basal melt-driven sub-ice shelf channel formation and its potential for accelerating the weakening of ice shelves.

The looked at radar data that had been gathered via satellite …

… then blended it all together so that what is going on becomes a lot clearer.

Why a channel, why not the entire ice shelf?

Well basically because it is …

a straightforward consequence of ocean physics: warm water, originating at depth and becoming buoyant due to melt freshening, flows along the ice shelf bottom and is guided to the left by Coriolis forces. Ocean circulation and ice thinning then self-organize to yield the thinning pattern observed.

Understanding the ongoing trend enables them to then look ahead and see how this will play out.

That is just a linear progression to zero. It is perhaps also inevitable that as the thinning proceeds, the dynamics of it all will change and lead to an acceleration of the now inevitable collapse of the Dotson ice shelf.

The paper concludes as follows …

we find here that channelized thinning is sustained from the grounding line up to the ice shelf’s calving front and is caused by elevated basal melting located on the Coriolis-favored side of the channel forced by ocean circulation within the subshelf cavity. The subshelf channel incises 100 to 200 m into the shelf and exceeds in place the thickness of the ice above; if current thinning rates persist, the channel would melt through by the end of the century. It is however likely that the ice shelf will respond to the imbalance before this occurs, potentially leading to an extension of the region of thinning, increased calving or potential collapse although the nature of this response is uncertain. Whatever the type of response, continued thinning and or collapse of DIS, it will lead to increase discharge of the grounded ice draining into the Dotson and Crosson ice shelves.

This is just one study that adds to the ever increasing mountain of evidence that a warming climate leads to rather dire consequences over longer periods of time. This is what is happening right now, and has been happening for the past 25 years, within the context of the current warming that has already happened. If no further warming happened, then this will still proceed as projected. Once gone, that then in turn leads to a runaway retreat of the glaciers buttressed by the ice shelf and the associated sea level rise over a longer period.

What is rather obviously disturbing about all of this is that as the pace of warming continues to accelerate, that in turn will accelerate this process.

Chris Mooney writes about this study within the Washington Post. There they also have the following clip …