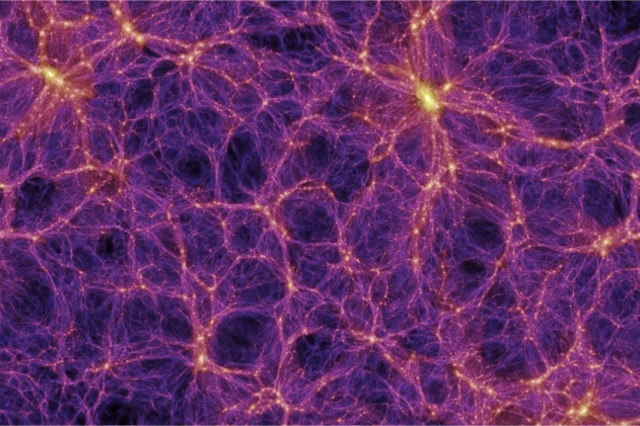 Putting both Dark Matter and also Dark Energy aside, if you look at everything we can see, all the galaxies, then it has been rather clear that a lot was missing, or to be a tad more precise, had not actually been observed.

How was that known?

Well, basically what should be there had been inferred from both the cosmic microwave background, and nuclear reactions within the early Universe. Cosmological simulations revelled that there should be filamentary structures in a cosmic web, forming a low density gas between galaxies. In other words the view is that the universe was not just a collection of isolated galaxies, but instead is more akin to a web that is interconnected by filaments of hot gas. (See image above).

Those intergalactic filaments were assumed to be there, but nobody had actually observed them and verified that this was indeed exactly how things are. That however has now changed because two separate teams have independently directly observed them.

There they report further details …

“The missing baryon problem is solved,” says Hideki Tanimura at the Institute of Space Astrophysics in Orsay, France, leader of one of the groups. The other team was led by Anna de Graaff at the University of Edinburgh, UK.

Because the gas is so tenuous and not quite hot enough for X-ray telescopes to pick up, nobody had been able to see it before.

“There’s no sweet spot – no sweet instrument that we’ve invented yet that can directly observe this gas,” says Richard Ellis at University College London. “It’s been purely speculation until now.”

So the two groups had to find another way to definitively show that these threads of gas are really there.

Both teams took advantage of a phenomenon called the Sunyaev-Zel’dovich effect that occurs when light left over from the big bang passes through hot gas. As the light travels, some of it scatters off the electrons in the gas, leaving a dim patch in the cosmic microwave background – our snapshot of the remnants from the birth of the cosmos.

In 2015, the Planck satellite created a map of this effect throughout the observable universe. Because the tendrils of gas between galaxies are so diffuse, the dim blotches they cause are far too slight to be seen directly on Planck’s map.

Both teams selected pairs of galaxies from the Sloan Digital Sky Survey that were expected to be connected by a strand of baryons. They stacked the Planck signals for the areas between the galaxies, making the individually faint strands detectable en masse.

Tanimura’s team stacked data on 260,000 pairs of galaxies, and de Graaff’s group used over a million pairs. Both teams found definitive evidence of gas filaments between the galaxies. Tanimura’s group found they were almost three times denser than the mean for normal matter in the universe, and de Graaf’s group found they were six times denser – confirmation that the gas in these areas is dense enough to form filaments.

“We expect some differences because we are looking at filaments at different distances,” says Tanimura. “If this factor is included, our findings are very consistent with the other group.”

Finally finding the extra baryons that have been predicted by decades of simulations validates some of our assumptions about the universe.

The first of the two studies published on arXiv is here …

We search the Planck data for a thermal Sunyaev-Zel’dovich (tSZ) signal due to gas filaments between pairs of Luminous Red Galaxies (LRG’s) taken from the Sloan Digital Sky Survey Data Release 12 (SDSS/DR12). We identify ∼260,000 LRG pairs in the DR12 catalog that lie within 6–10 h−1Mpc of each other in tangential direction and within 6 h−1Mpc in radial direction. We stack pairs by rotating and scaling the angular positions of each LRG so they lie on a common reference frame, then we subtract a circularly symmetric halo from each member of the pair to search for a residual signal between the pair members. We find a sta- tistically significant (5.3σ) signal between LRG pairs in the stacked data with a magnitude ∆y = (1.31 ± 0.25) × 10−8. The uncertainty is estimated from two Monte Carlo null tests which also establish the reliability of our analysis. Assuming a simple, isothermal, cylindrical filament model of electron over-density with a radial density profile proportional to rc/r (as determined from simulations), where r is the perpendicular distance from the cylinder axis and rc is the core radius of the density profile, we constrain the product of over-density and filament temperature to be δc × (Te/107 K) × (rc/0.5h−1 Mpc) = 2.7 ± 0.5. To our knowledge, this is the first detection of filamentary gas at over-densities typical of cosmological large- scale structure. We compare our result to the BAHAMAS suite of cosmological hydrody- namic simulations (McCarthy et al. 2017) and find a slightly lower, but marginally consistent Comptonization excess, ∆y = (0.84 ± 0.24) × 10−8.

The second, also published on arXiv is here …

Observations of galaxies and galaxy clusters in the local universe can account for only 10% of the baryon content inferred from measurements of the cosmic microwave background and from nuclear reactions in the early Universe1–3. Locating the remaining 90% of baryons has been one of the major challenges in modern cosmology. Cosmological simulations predict that the ‘missing baryons’ are spread throughout filamentary structures in the cosmic web, forming a low density gas with temperatures of 105 − 107 K4,5. Previous attempts to ob- serve this warm-hot filamentary gas via X-ray emission or absorption in quasar spectra have proven difficult due to its diffuse and low-temperature nature6–9. Here we report a 5.1σ detection of warm-hot baryons in stacked filaments through the thermal Sunyaev-Zel’dovich (SZ) effect, which arises from the distortion in the cosmic microwave background spectrum due to ionised gas10. The estimated gas density in these 15 Megaparsec-long filaments is approximately 6 times the mean universal baryon density, and overall this can account for ∼ 30% of the total baryon content of the Universe. This result establishes the presence of ionised gas in large-scale filaments, and suggests that the missing baryons problem may be resolved via observations of the cosmic web.

It is interesting that both teams used the Sunyaev-Zel’dovich effect (that’s a distortion in the CMB).

Its essence, the picture of the universe that emerges is as follows.

First, what is a baryon?

Basically that is a composite subatomic particle. An example would be a proton or a neutron. They account for most of the mass of the visible matter in the universe.

OK, so it is filaments of hot gas between galaxies that have now been observed, and that appears to show that the ideas regarding how galaxies form and are structured are essentially correct.

The picture is this. The matter distribution of the Universe follows a web-like pattern, generated by the gravitational instability of small initial density fluctuations. Galaxies and galaxy clusters are embedded in the knots of the web (known as dark matter haloes), and are connected by large-scale filamentary and sheet-like structures. Both observations and simulations suggest that a significant fraction of baryons should be found outside the gravitationally bound haloes, in filaments and sheets. The baryons are expected to be in a diffuse ‘warm-hot’ state. Previous efforts to detect them did not work.

Bottom Line: By using the thermal Sunyaev-Zel’dovich effect it has become possible to actually detect these warm-hot baryons in filaments and so it verifies that our understanding of galaxies is right.

No, not from me, but far more appropriately from a subject matter expert  …

Everybody sort of knows that it has to be there, but this is the first time that somebody – two different groups, no less – has come up with a definitive detection.

This goes a long way toward showing that many of our ideas of how galaxies form and how structures form over the history of the universe are pretty much correct,