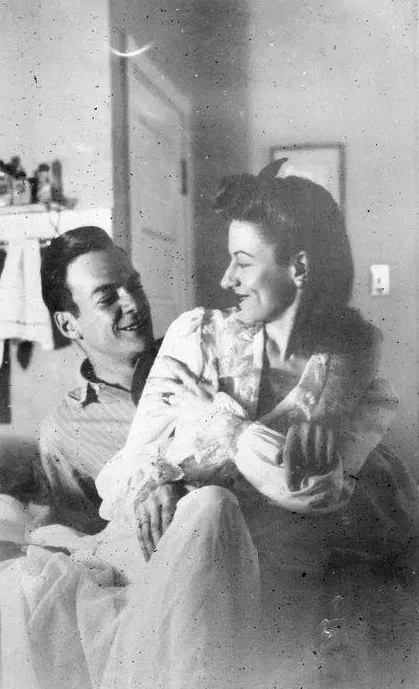 Richard Feynman tells the following story about the time when his wife Arline died. It was 1945. She was in her 20s and sadly had tuberculosis. They had only been married two years.

Below is an extract from his book, Surely Your Joking Mr. Feynman, describing what happened while he was working in Los Alamos on the Manhattan Project  …

“My wife, Arlene, was ill with tuberculosis—very ill indeed. It looked as if something might happen at any minute, so I arranged ahead of time with a friend of mine in the dormitory to borrow his car in an emergency so I could get to Albuquerque quickly. His name was Klaus Fuchs. He was the spy, and he used his automobile to take the atomic secrets away from Los Alamos down to Santa Fe. But nobody knew that.

The emergency arrived. I borrowed Fuchs’s car and picked up a couple of hitchhikers, in case something happened with the car on the way to Albuquerque. Sure enough, just as we were driving into Santa Fe, we got a flat tire. The two guys helped me change the tire, and just as we were leaving Santa Fe, another tire went flat. We pushed the car into a nearby gas station.

The gas station guy was repairing somebody else’s car, and it was going to take a while before he could help us. I didn’t even think to say anything, but the two hitchhikers went over to the gas station man and told him the situation. Soon we had a new tire (but no spare—tires were hard to get during the war).

About thirty miles outside Albuquerque a third tire went flat, so I left the car on the road and we hitchhiked the rest of the way. I phoned a garage to go out and get the car while I went to the hospital to see my wife.

Arlene died a few hours after I got there. A nurse came in to fill out the death certificate, and went out again. I spent a little more time with my wife. Then I looked at the clock I had given her seven years before, when she had first become sick with tuberculosis. It was something which in those days was very nice: a digital clock whose numbers would change by turning around mechanically. The clock was very delicate and often stopped for one reason or another—I had to repair it from time to time—but I kept it going for all those years. Now, it had stopped once more—at 9:22, the time on the death certificate!

I remembered the time I was in my fraternity house at MIT when the idea came into my head completely out of the blue that my grandmother was dead. Right after that there was a telephone call, just like that. It was for Pete Bernays—my grandmother wasn’t dead. So I remembered that, in case somebody told me a story that ended the other way. I figured that such things can sometimes happen by luck—after all, my grandmother was very old—although people might think they happened by some sort of supernatural phenomenon.

Arlene had kept this clock by her bedside all the time she was sick, and now it stopped the moment she died.

The exact moment she died the clock stopped.

Was this something supernatural, had something truly amazing happened?

Let’s read on and find out.

Here is what really happened

I can understand how a person who half believes in the possibility of such things, and who hasn’t got a doubting mind—especially in a circumstance like that—doesn’t immediately try to figure out what happened, but instead explains that no one touched the clock, and there was no possibility of explanation by normal phenomena. The clock simply stopped. It would become a dramatic example of these fantastic phenomena.

I saw that the light in the room was low, and then I remembered that the nurse had picked up the clock and turned it toward the light to see the face better. That could easily have stopped it. I went for a walk outside.”

When faced with something unknown the pattern seeking engine sitting between our ears will scramble for an answer. We are desperate to fill that gap in understanding with something, and so we do quite naturally reach out and grasp any answer, even supernatural ones.

‘How weak our brains are, and how quickly they are terrified and led into error by a small incomprehensible fact. Instead of saying simply: ‘I do not understand because I do not know the cause,’ we immediately imagine terrible mysteries and supernatural powers.’

It might not satisfy, and it might indeed drive us crazy, but there are times when the best possible answer really is “I don’t know”.